The House of the Spirits

Both Yvette and Transito Soto are prostitutes in their respective texts, although they became prostitutes under different circumstances. Yvette was forced to become an army prostitute after following the Swedish army and being ditched by Peter Lamb, who also happens to be the Cook in the story, leaving her with no other option for survival. She regrets her decision in “running after him [The Cook].” (Brecht 1939, 16). Transito Soto, on the other hand, was already introduced to us as a prostitute working in the Red Lantern.

Don't use plagiarized sources. Get your custom essay on
“ The House of the Spirits ”
Get custom paper
NEW! smart matching with writer

She was a prostitute with an ambition, for her goal was to go to the capital to be rich and famous (Allende 1982, 69).

Both characters’ roles were to help or support the protagonist and their family of their respective story. For Yvette, she fulfills her role by warning Kattrin to not get involved with soldiers, telling the truth about the Cook, and, more importantly, giving her best effort to save Swiss Cheese’s life. She convinces the Colonel she was with to buy Mother Courage’s cart for her so that Mother Courage would have the money to save Swiss Cheese.

Yvette also served as the negotiator for Mother Courage to the sergeant in charge of Swiss Cheese’s execution. It was all for naught unfortunately. Transito Soto fulfills her role by using her connections in the government to rescue Alba from the concentration camp. She did this to repay her debt of the fifty pesos she was given by Esteban Trueba (Allende 1982, 69).

In a war, there will always be the little people who get caught up in chaos.

Mother Courage, her children, and Yvette were no exceptions. The little people did what was necessary to survive. Mother Courage had the cart, Yvette had only her body and good looks and as such, peddling goods and prostitution respectively were their only means of being able to feed themselves. It’s quite hard to count on generosity in war. Most people gain nothing and lose something and in the case of Mother Courage, she never really gained any real profit and lost all three of her children. A lucky few get a break and manage to gain something. Yvette married a wealthy and powerful Colonel and secured her future at the cost of her beauty since she is described as much older, fatter, heavily powdered and leaning on a stick in her last appearance (Brecht 1939, 30). With her being an army prostitute, Yvette was safe as she was surrounded by soldiers. With her position, she was also able to catch the eyes of men who had high positions within the military hierarchy. She was lucky in this regard and managed to connect with the people in power during the war, such as the Colonel, and eventually seduce one into making her wealthy. She was one of the lucky few who remained relatively untouched by the war, as opposed to everyone else who was very affected or even became dependent on the war.

Transito Soto’s first scene was a foreshadowing to when she would repay Esteban Trueba’s rare act of generosity by saving Alba. To get to that point, she had to build up her reputation and establish connections. She planned to do this by being a prostitute in the city as evidenced by her stating the purpose of the fifty pesos; “For a train ticket, a red dress, high-heeled shoes, a bottle of perfume, and a permanent.” (Allende 1982, 69), and eventually run the Christopher Columbus, a brothel which would become famous under her management as the story progressed. Her skills as a prostitute, as well as her personality, manages to placate men like Esteban Trueba, men who had violent tempers and acted out violently, men who held positions of power and had a vice for sex, and this is what allows her to establish her reputation and grow from there. The next time Esteban visited her was when Clara was pregnant with Jaime and Nicolas. He insisted that she owe him a favor for the fifty pesos he gave all those years ago instead of paying back the fifty pesos adjusted for inflation (Allende 1982, 116). She starts off as someone who is indebted to Esteban Trueba, and it becomes apparent that as she gained influence, she became one of those “friends in high places”, who Esteban asks to repay the favor by saving Alba when he finds out she has connections in the military.

Yvette symbolizes the desperation of people to survive and the measures they will take in order to do so. All she had was her body and good looks so she resorted to prostitution in the army to keep her safe and feed herself. This is highlighted in the scene where she asks the Colonel, a man high up in the military hierarchy, to buy Mother Courage’s cart for her. Yvette also symbolizes the reality that war will always take something from you. In Yvette’s case, it took her beauty and gave her wealth and a secure future. For most of the other characters, it gave them death or loneliness as it took their lives or the lives of their loved ones such as Mother Courage and her children, as well as ruin relationships such as the one between Mother Courage and the Cook where she leaves with her daughter, leaving him alone. Transito Soto’s rise in influence is parallel with Esteban Trueba’s decline in physical, mental health, and political influence. When they see each other for the last time, all Esteban has is Alba, his grand-daughter, who is in military custody, and he asks for Transito’s help in rescuing her, and she does so by using the influence that Esteban now lacks. Transito also symbolizes the shift in power from man and woman.

The House of the Spirits. (2019, Dec 14). Retrieved from https://studymoose.com/the-house-of-the-spirits-essay 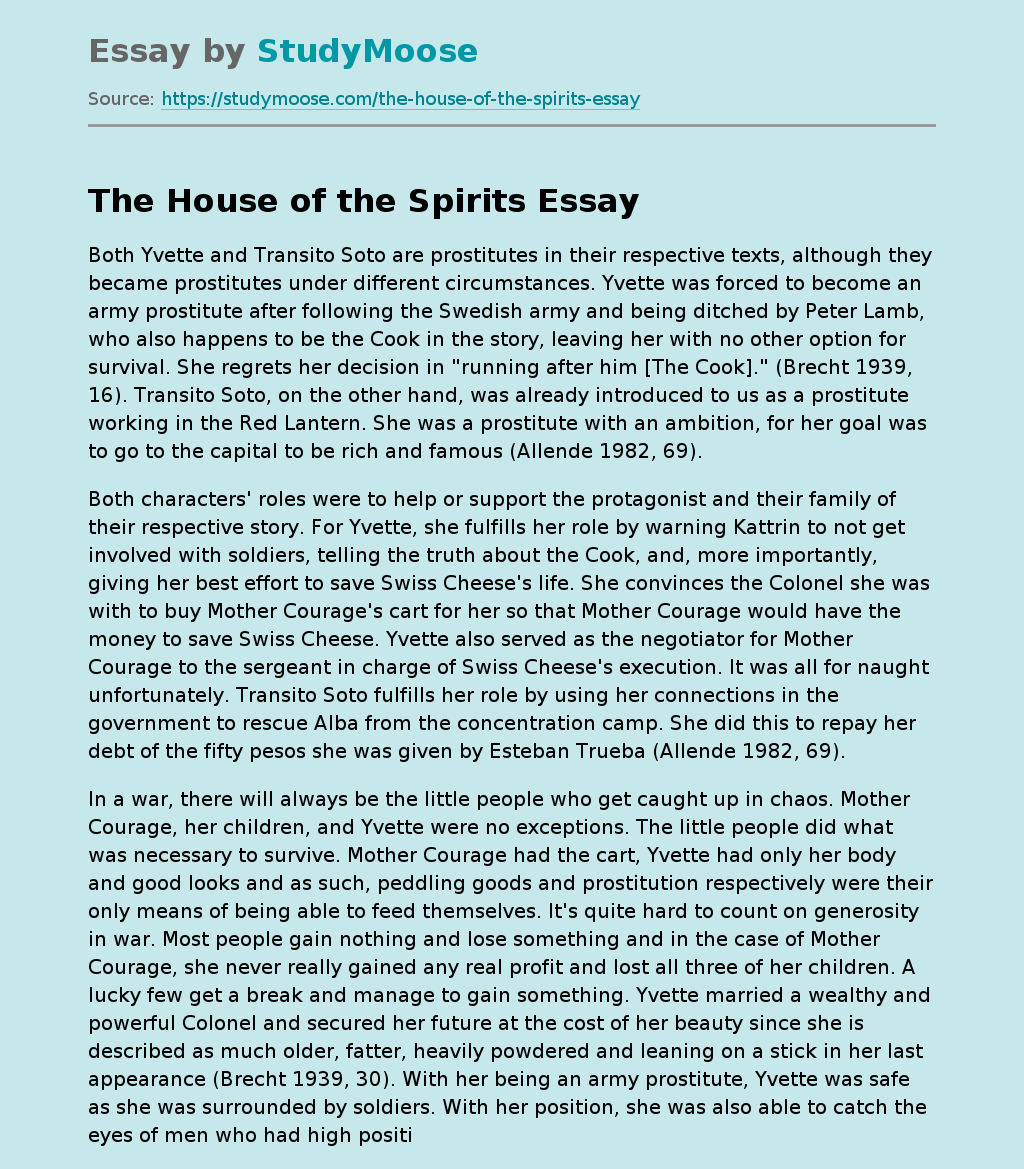