The House I Live In

The war on drugs whether wrong, right, or indifferent, has yielded a plethora of life changing outcomes for many United States citizens. Both the plaintiff and the defendant have their own side of the dispute, and yet somehow the plaintiff in the non-stop ‘cash grab’ that’s so conveniently nicknamed the “War on Drugs” gets the benefit of zero-tolerance, or minimum sentencing. In most cases the defendants simply are doomed from the beginning due to horrible living conditions and lack of jobs in the area.

Don't use plagiarized sources. Get your custom essay on
“ The House I Live In ”
Get custom paper
NEW! smart matching with writer

Coupled with police brutality and prejudice pointed toward the African-American community as a whole, it should come as no surprise that in 2011 there were more African-Americans in prison or “under the watch” of the justice system than were enslaved in the United States in 1850. This is not any more a war on drugs than the Iraqi Conflict was a war on the seizure of weapons of mass destruction.

The War on Drugs is seemingly the work of angelic political figures wanting only to cleanse the American individual of all impurities in hindrance of life, love, and prosperity.

However, when carefully examined and then further cross-examined, a faint smell of fish seems to linger. Is this war all of us American’s allowed to be called on drugs really an effort to ‘catch the bad guys’ or is it one of the biggest “sleight of hand” operations used to both heavily incarcerate and monetarily penalize individuals deemed disobedient. Incredibly similar to war profiteering, the same structure that is applied to enemies foreign, is applied to the supposed ‘enemies domestic’.

In War Profiteering, we simply blow up an entire country, give what little government is established some weapons and infrastructure, then leave and allow the ‘bad guys’ to come right back and take back all that was given. Then we swiftly declare crisis or a state of conflict, rush back into the country and begin the cycle all over again.

This cycle parallels the “War on Drugs” in a way in which the American’s who are incarcerated, are not being rehabilitated they are being merely contained. Then after, the prisoner is released with no life skills needed to survive in a world completely foreign to the prisoner. Shortly after, said prisoner will more than likely turn to the only means of economic stability he or she knows, which more often than not, is the reasoning for the previous indictment.

The vicious cycle known as America’s “War on Drugs” is merely a front for behind the scenes, corporate backroom dealing. Whether or not there is a motive based on race and the discrimination of an entire group of people, or the exponential growth in profits alongside the rapid growth of prisoners in the United States, some form of corruption seems to be more than prevalent. However, exposing this corruption is next to impossible when dealing with such a sensitive issue. Not only is this hole America has entrenched itself nearly impossible to dig out of, the challenge grows by tenfold when one tries to then burry that hole with the reconstruction or rehabilitation of the individuals actually addicted to substance abuse. Above all else, the current War on Drugs is not working, and unless the average American can pull themselves away from Facebook and “Keeping up with the Kardashians”, nothing will change. 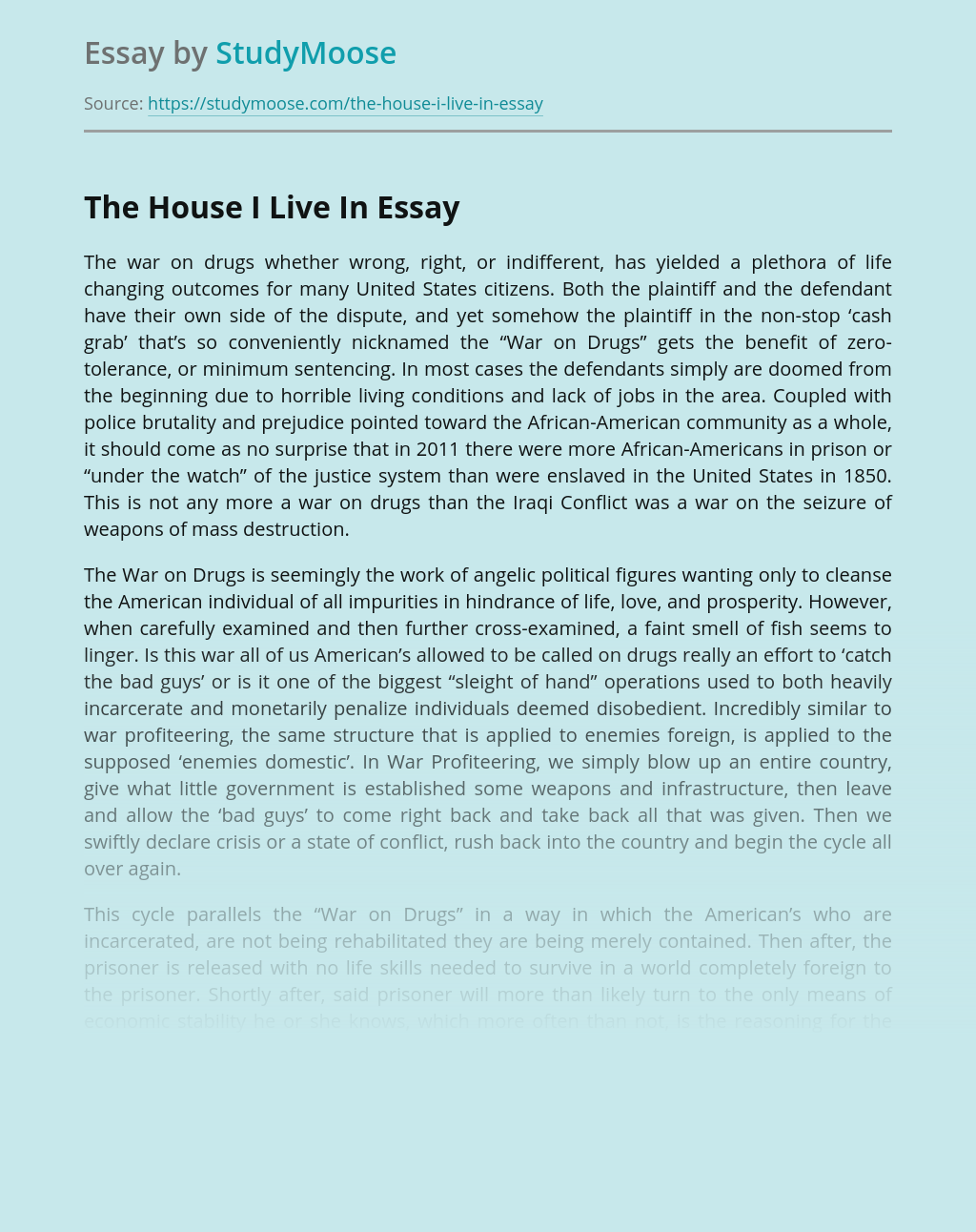