Solution to War on drugs

Abstract
The War on Drugs is extensively regarded as a requirement in the present society that has been laden with the burden of drug abuse, addiction, rehabilitation and increased crime rates due to drug abuse. War on Drugs has remained a deep rooted contentious campaign that has been debated over and over for several years in the search of a liable solution that can solve the problem permanently. The war on drugs affects every citizen through the legalization of drugs, increasing taxes for the rehabilitation and support of drug users and the increased level of crime due to drug use.

Turn in your highest-quality paper
Get a qualified writer to help you with
“ Solution to War on drugs ”
Get high-quality paper
NEW! AI matching with writer

A solution to the war on drugs
The War on Drugs has been ongoing over the years without much success as the illegal narcotics still remain as a serious challenge for the several countries. Drug liberalization has been proposed as a perfect solution to the war on drugs in the present world and this is can result in tangible results. Drug liberalization is regarded as a process of removing or minimising the drug related prohibition laws. This policy has been advocated to be an effective solution and this involves both processes of drug re-legalization, decriminalization and legalization.

This solution also aims at increasing revenue through the taxation of drugs, protect the adults’ rights of living their lives without any interference from the authorities and also reduce crimes as a result of liberalization (Miron & Zwiebel, 2005). Drug liberalization has been proposed as a concrete solution most due to the failure of the current drug prevention policies and this involves drug re-legalization and decriminalization.

Re-legalization of drugs is a solution that requires the government to end all the enforced prohibition with regards to the sale, distribution or personal use of drugs that are banned. This solution of legalization will partially remove all kinds of government control to these drugs and as a result the drugs will be legally available. However, the legalisation will require mandatory labelling of dosage, restriction on advertising, labels with medical warnings, age limitations, purchase limitations, ban of drug sale to intoxicated people and a special license to users who purchase certain drugs (Ostrowski, 2009). Drug decriminalization is a solution to war on drugs and it aims at the reduction and control of the penalties which are presently used with the existing laws.

This solution is an intermediate between drug prohibition and legalisation and this approach mainly focuses on the law enforcers in any nation to put efforts in arresting the drug dealers and other big time drug criminals rather than arresting the minor drug uses and those who are in possession of the drugs. This solution basically involves the use of fines to the drug offenders or other forms of punishment in replacing prison terms where most drug criminals are hardened (Inciardi, 1999). The concept behind drug liberalization is mainly towards lowering crime rates, eliminating the illegal drugs trade and controlling the illegal drugs potency. The war on drugs is mainly fought to reduce dependency for illegal drugs, its personal use, distribution and its application in violent crimes.

As a result, these measures can be essential as a perfect solution to the war on drugs that seems to have failed over the years. In conclusion, drug liberalization is a concrete solution most due to the failure of the current drug prevention policies and this solution involves drug re-legalization and decriminalization.

Solution to War on drugs. (2016, May 09). Retrieved from https://studymoose.com/solution-to-war-on-drugs-essay 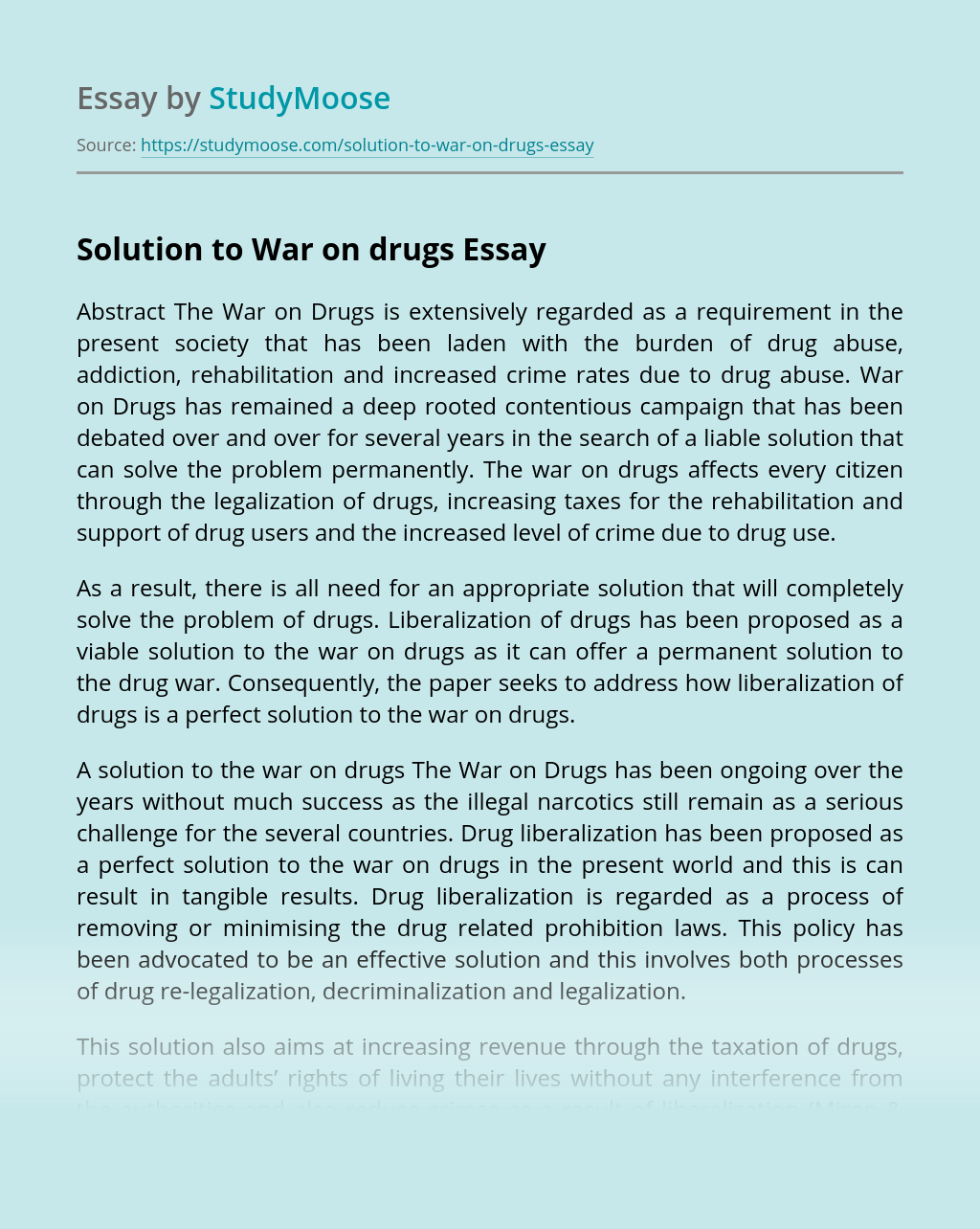 Turn in your highest-quality paper
Get a qualified writer to help you with
“ Solution to War on drugs ”
Get high-quality paper
Helping students since 2015
Stay Safe, Stay Original