The Happiest Moment of My Life

Running on the road with wind shouting in my ears, I enjoyed the happiest moment of my life. Like people praying and participating in spiritual practices, I find my spirituality which eases and relieves me. It is running helping me retrieving energy, and the memory with it has become the happiest in my life. I found myself chasing after gold medals most of my vigorous youth. I started competing in athletic games since elementary schools.

That time, I was competing in a race which offered a chance to represent our city in the National Athletic Meet.

Don't use plagiarized sources. Get your custom essay on
“ The Happiest Moment of My Life ”
Get custom paper
NEW! smart matching with writer

I was earnest to strive for the best honor and spent most of the time in running training. Everyday the coach wrote down my tasks on a piece of paper we called ‘menu’. I trained in the drill as if having 3 meals a day. From morning to night, Monday to Sunday, January to December, all I could do was kept running and running. There was an illusion that I was in the dessert, keeping walking ahead and feeling the sand full of my mouth.

Sometimes I lost in the dessert, wondering where I was and whether I could go through the hardship; sometimes I felt my body overused but the coach warned me constantly that sooner my opponents would chase on me if I slacked off. I could feel the responsibility for success rested squarely on my shoulders. Eventually, I won the gold medal and later won the fifth prize in 200-meter race at The National Athletic Meet! This is the happiest moment of my life because I’ve struggled to accomplish a dream and it did come true!

Example 2. The Happiest Moment In My Life

Last year I sat for my lower certificate of education examination. This was the first important hurdle that I had to cross in my academic career. Up to that time I had been automatically promoted from one standard or from to the next.

My parents are not very rich. They could not afford to send me to a private tutor in the town, nor could they coach me, not being highly educated them. I had not taken studies seriously during the primary school years. During the three years in the lower secondary school, I had worked fairly hard. However, I had not fared better than being admitted to the third stream out of the six in form Three. I had progressed steadily throughout the year but had still failed to pass in all subjects at the trial test held in the middle of July. Thus my chances of doing well at the lower certificate of education examination were rather slim.

After the examination was over my parents were often overheard talking disappointedly of my future. They had little confidence in my ability to pass the examination or to cope with my studies in the higher forms if I did manage to scrape through it. They accordingly decided to find me a job immediately, if possible, but definitely, after the results were out.

I had different idea of the situation. I felt that I had done very well at the examination. The hard work that I had put in during the three months between the pilot test and the real, examination had definitely given me much hope for success. It is true that I had not made many notes during Forms One and Two.4essay.blogspot.com But I had free access to the notes prepared by the best pupil in the first stream, a friend of mine. A young teacher who joined the school after the December holidays had given me much-needed help and encouragement.

When the results were published, I was staying with an aunt of mine living about ten miles away from our town. A neighbor brought the news to my aunt. She told me to stay on with her until my parents had sent for me. But I ignored her advice. The moment she had resumed her household chores, I left for the nearest bus stop. A bus arrived within minutes of my arrival there and within an hour I was at home.

My parents were not at home. Some neighbors told me that they had gone to Karachi to see someone there, so I decided to go immediately to my school to make enquiries about my results. It was nearly 5.00p.m when arrived there. Both gates had been barred and locked up. But I refused to be held back by such and obstruction as a shut door. I climbed to the top of the gate and jumped down on the other side. As I left the gate behind I was troubled with the thought that the collapsible gate at the head of the passage leading to the school office might have been locked. Luckily for me, the result had been stuck on a notice-board in the porch.

I could hardly believe my eyes as I went over the line bearing my results. Not only had I scored distinctions in Mathematics, General Sciences and English. But I had obtained credits. And all other subjects in some of which I was considered to be very weak. I could take either Science or Arts in Form Four. I felt a bit dizzy as I fully appreciated the significance of the figures before my eyes.

I do not know how long I stood there, but I do remember that all the while I did not look above or below the line bearing my own results. When ultimately I left for the school gate, I saw the ‘Watchman’ standing in front of it. Normally I should have realized that he would scold me for entering the school as I had done, but I hardly thought so then.

When I approached him, he asked me, Have you passed”. I don’t know why f did so, but I ran up to him, hugged him hard, and wept, making his shirt wet with my tears. That was the happiest moment in my life.

Example 3.The happiest experience in my life

I have gained many experiences . There were good and bad experiences .All these experiences have made me more matured and wiser . The most exiting experience I gained was when my father brought my family to Egypt to further his studies .We lived there for six years. Over the course of my life, I have experienced many days of happiness; they all had a unique ingredient that separated them from each other as a distinct experience. There is; however, a day that I remember with extra fondness, a day that occupies a bigger space in my heart, the day of my eighteenth birthday. I suppose I could say this is possibly the happiest day in my life so far. The three factors that made this day so special were: a birthday cake, my friends, and a train station. A MOMENT YOU CONSIDER TO BE THE MOST JOYFUL”

Every person has a moment or a few memories which he remembers through out his life . The joy of that moment is so over whelming, many of us remember it as the best day of our life , it is mostly about achieving what you strive for, in my case , it is a bit different, I wanted what most of us usually have. It is what a human at this age is certain to have, it just comes naturally to us, the circle of socializing and friendship are just a part of human nature. In this world where we live, joys are short but still so precious to us, specially when we go lucky and get what we deserve as well as what we didn’t.

The Happiest Moment of My Life. (2017, Feb 16). Retrieved from http://studymoose.com/the-happiest-moment-of-my-life-essay 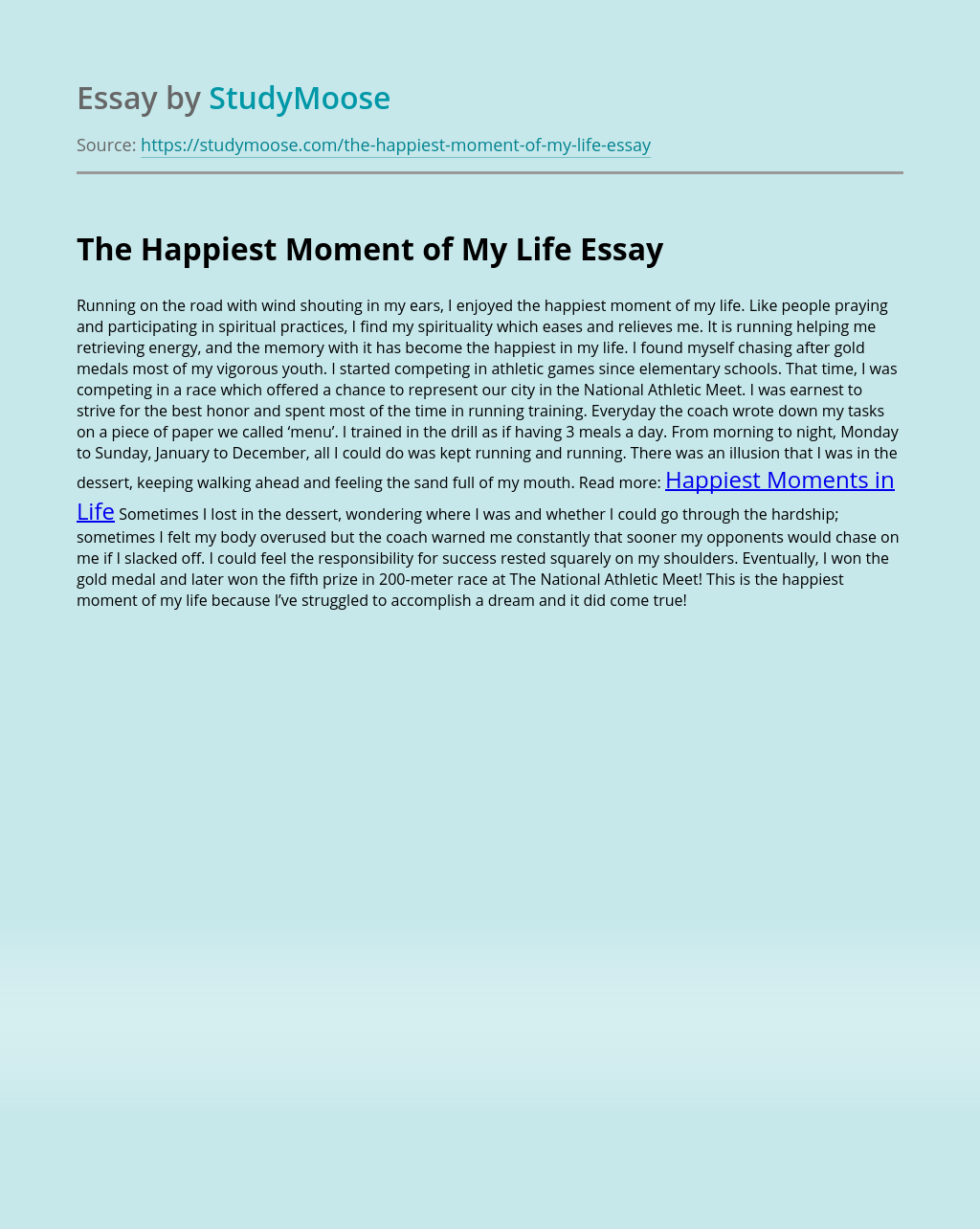