The Happiest Moment In My Life

Last year I sat for my lower certificate of education examination. This was the first important hurdle that I had to cross in my academic career. Up to that time I had been automatically promoted from one standard or from to the next.

My parents are not very rich. They could not afford to send me to a private tutor in the town, nor could they coach me, not being highly educated them. I had not taken studies seriously during the primary school years.

Don't use plagiarized sources.
Get Your Custom Essay on The Happiest Moment In My Life Just from $13,9/Page

During the three years in the lower secondary school, I had worked fairly hard. However, I had not fared better than being admitted to the third stream out of the six in form Three. I had progressed steadily throughout the year but had still failed to pass in all subjects at the trial test held in the middle of July. Thus my chances of doing well at the lower certificate of education examination were rather slim.

After the examination was over my parents were often overheard talking disappointedly of my future.

They had little confidence in my ability to pass the examination or to cope with my studies in the higher forms if I did manage to scrape through it. They accordingly decided to find me a job immediately, if possible, but definitely, after the results were out.

I had different idea of the situation. I felt that I had done very well at the examination. The hard work that I had put in during the three months between the pilot test and the real, examination had definitely given me much hope for success. It is true that I had not made many notes during Forms One and Two.4essay.blogspot.com But I had free access to the notes prepared by the best pupil in the first stream, a friend of mine. A young teacher who joined the school after the December holidays had given me much-needed help and encouragement.

When the results were published, I was staying with an aunt of mine living about ten miles away from our town. A neighbor brought the news to my aunt. She told me to stay on with her until my parents had sent for me. But I ignored her advice. The moment she had resumed her household chores, I left for the nearest bus stop. A bus arrived within minutes of my arrival there and within an hour I was at home.

My parents were not at home. Some neighbors told me that they had gone to Karachi to see someone there, so I decided to go immediately to my school to make enquiries about my results. It was nearly 5.00p.m when arrived there. Both gates had been barred and locked up. But I refused to be held back by such and obstruction as a shut door. I climbed to the top of the gate and jumped down on the other side. As I left the gate behind I was troubled with the thought that the collapsible gate at the head of the passage leading to the school office might have been locked. Luckily for me, the result had been stuck on a notice-board in the porch.

I could hardly believe my eyes as I went over the line bearing my results. Not only had I scored distinctions in Mathematics, General Sciences and English. But I had obtained credits. And all other subjects in some of which I was considered to be very weak. I could take either Science or Arts in Form Four. I felt a bit dizzy as I fully appreciated the significance of the figures before my eyes.

I do not know how long I stood there, but I do remember that all the while I did not look above or below the line bearing my own results. When ultimately I left for the school gate, I saw the ‘Watchman’ standing in front of it. Normally I should have realized that he would scold me for entering the school as I had done, but I hardly thought so then.

When I approached him, he asked me, Have you passed”. I don’t know why f did so, but I ran up to him, hugged him hard, and wept, making his shirt wet with my tears. That was the happiest moment in my life.

The Happiest Moment In My Life. (2016, May 17). Retrieved from https://studymoose.com/the-happiest-moment-in-my-life-essay 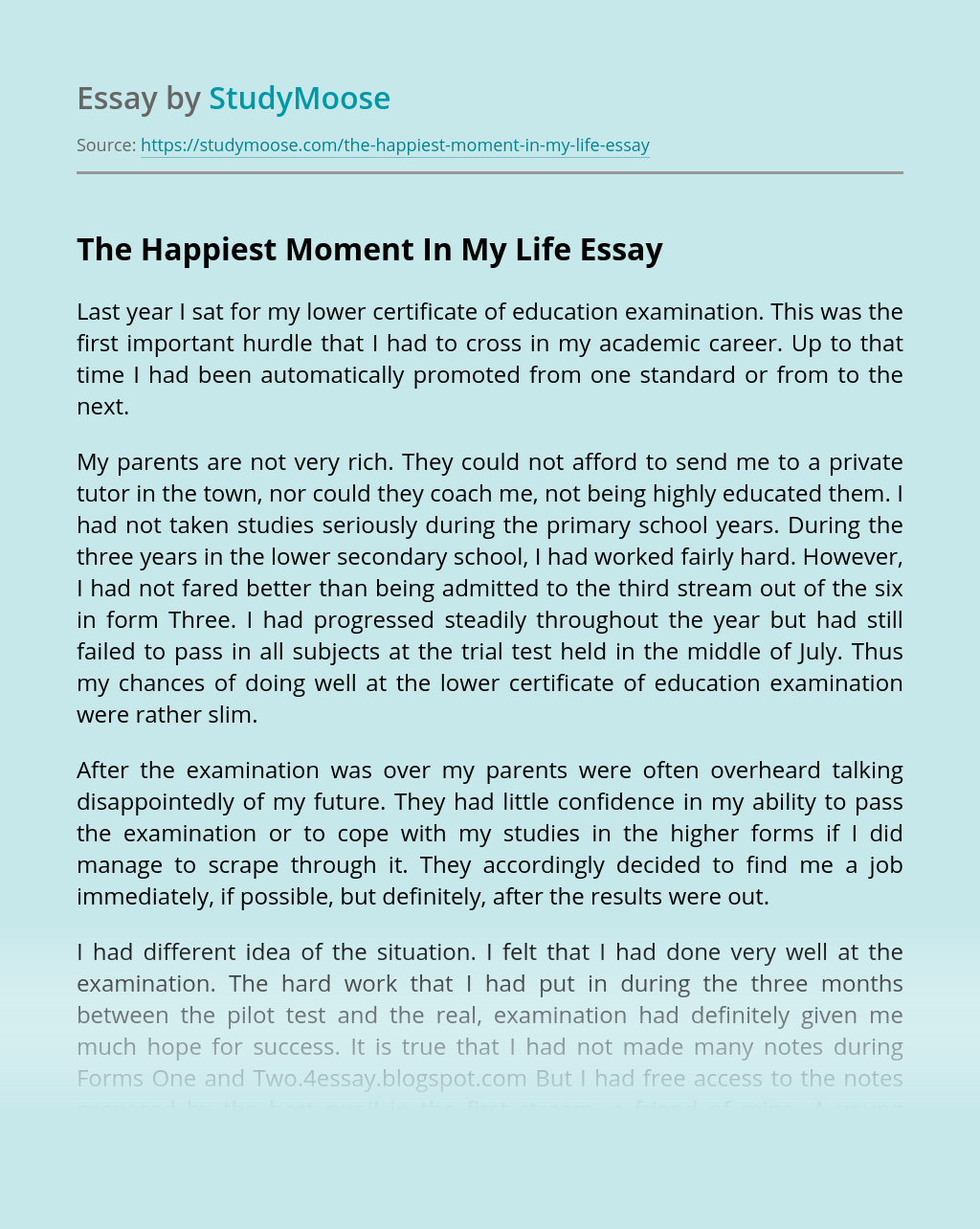 Advantages and disadvantages of studying abroad

Almost every student around the world wishes to pursue his or her education. However, every issue has its pros and cons. In order to making a better decision, one has to explore different aspects of a plan. Studying abroad lets you experience things you have never faced them before. It gives you the opportunity to...

Get Essay
Exams Are a Necessary Evil

Exams! Exams! Exams! Exams are the dreaded word that plagues you during student life. As an adult who is done and dusted with this nightmare, you may look back more often than once wondering if all that stress and trauma was after all worth the while. For starters let’s take a step back and analyze...

Past formal or informal language learning experiences.(any language which is not your first language.

My mother tongue is Bengali which is being spoken in our house since my childhood. I have done my preliminary education from Doon. While schooling I’ve studied in English as my first language and Hindi being the second. Thereafter after completing my secondary education I came to Kolkata where in I got a chance to...

Survey| How did you survey?I skimmed the pages required, the main topics, and picked up the basis of what was required reading. What questions did you ask?The question I asked myself is what information was the most important for me to retain while reading. What are the main topics of the reading material. What knowledge...