The purpose of this report is mainly focused on the examining, describing and evaluating the issues which occurred within the legends mainly focusing on experiences. Firstly is an evaluation of group work which includes feeling and other problems. Then different approaches to group work which is explained using a few theories and the problems which was encountered during the main issues which occurred during the group after formation. Following this is the illustration of how the difficulties were addressed. Learning form experiences since the difficulties occurred then it’s the way in which a new project will be approached.

Don't use plagiarized sources. Get your custom essay on
“ The Group Work Evaluation ”
Get custom paper
NEW! smart matching with writer

Moreover, is the outline of skills which highlighted my strengths and weaknesses and within the report a few examples are also highlighted.

Members of the group only focused on the task to be done there was no socializing. In relation to Schiens statement when the basic areas of group collations are not meet then the individuals result in the feeling responses. During the group for example, sometimes I felt neglected at times because most of the times when I gave suggestions most of the times it was never raised.

Some of the feelings I felt during the group work was insecurity meaning sometimes I felt as though I was not accepting by the group. In addition tension, because sometimes member will try to control and persuade you.

My contributions to groupthink were my lack of interest in issues and avoid listening to opinions from people in the group. Group members sometimes try to avoid responsibility and accountability, for example, a member may say ‘we do not have to do that what we have done is sufficient’.

Conflicts also arise within the group for example, there was conflict where a member was stating that the roles and responsible was not clear and he did not want his role and more he wanted a different role. There were meetings but sometimes group members turn up late, some never turn up. I remember I did not go to one of the meetings because I interpreted the message wrong.

The group lacked communication between members even those we had the resources, some members never replied to e-mails. Moreover, according to Brooks the group legends had these five personality traits which were agreeable, introvert or extrovert, openness, stable emotions and conscientiousness. In relation to these personality theories during the group work I had stable emotions because sometimes I can just scream. Due to the fact that one of the group member would always like to tell you what to do even though that person was not the leader. In addition, I would say I was conscientious because I will always try to do the work that was assigned to me even though sometimes I was late.

At the beginning of the project when I was assign to a group I completed the Belbin team role personality test and the result was an implementer. During the group process I recognise my performance was completer finisher. In appendix A is a diagram in which I should have used when I was within the group, but within the group I only related to my contribution and myself I did not acknowledge my behaviour towards others.

According to Schein individuals working in a group not only have to focus on group task but also individual behaviour. The effectiveness and efficiency in a group is of vital importance. Below is Schein model for an effective group or team.

Our group mainly focused on getting the job done and not interacting with each other which I think is important for the development of a group. Therefore, when I am involved in another group I will definitely focus on the three areas mention by Schein in the triangle by having a cohesive group and being aware of individuals needs.

Furthermore I will take into consideration personality of others and trying to get everyone involved in the project.

Although the work was divided and I had a deadline to do respective pieces of work sometimes I found myself handing in my work to the group late.

Sometimes it felt like the meetings were a waste of time because sometimes it was an argument before a conclusion was given or there was none; see minutes of meeting in appendix B for one of the disagreement which occurred during a meeting. In terms of language some members spoke different languages, therefore when group meetings were held members will begin speaking in their language which I found was not appropriate. In this case I was affected because I did not understand what they were saying. Even though I ask them to speak in english they still persisted in speaking their language and deep down inside I was angry and I felt like getting up and going home.

There were a few conflict issues between group members; for example, a group member did not like the role given. In this case I ask the member if he or she wanted my role the member said yes but the group leader said no. Groupthink occurred within the group due to the fact that we were not crucial of each other’s opinion and not analysing alternative plans. On the event day members only concentrated on show individuals who came to our stall their activities and the other activities were not mentioned. Before presentations we did come together as a group to and analysis the performance of the project.

When coping with difficulties within the group for example with conflict the best suggestion is to avoid or reduce conflicts, implement addition structures to develop teamwork. To avoid the problem of missing meetings the group leader will call members. In my group I should have volunteered myself more to assist in many more areas of the group. There were a few disagreements within the group I dealt with it by intervening with a sense of humour. Then she calmed down and said thank for understanding me Vonette, I really appreciate it.

While I was practising for our presentations when everyone heard my part of the presentation they said it was good. They then decided for us to practice some more. While I started practicing one of the group members started to criticise everything for example, how long I spoke for and how I looked at the audience. I found she was over reacting and I stop and I said you can practise now. Then I stayed for five minutes and left.

I will be aware of my own behaviour and feelings towards others. I will also take into consideration Adairs basic theory which highlights the uniqueness of each individual working together to achieve the task building the group or team and developing individuals, see appendix C for diagram. During the project we only focused on achieving the task, for example getting resources and funds for the project. There was no effort of team building and assisting with each other’s development. In relation to Tuckman’s theory the group stopped at storming, but is important to perform all the stages of development for growth within the group, see appendix D for an illustration of Tuckman’s theory.

The Johari window model describes the effectiveness of relationships thorough evaluation and self-disclosure. The model has four windows which are open, blind spot, hidden area and unknown area, see appendix E. This model can be used in a group to maintain efficiency, effectiveness and communication through the windows. I will be excited in approaching another project because I like changes and challenges.

To assist in the success of the team I would recognize the differences of others in relation to their ideas and suggestions and be prepared to deal with disagreements between members. I have been late for meeting and handing up scripts sometimes so I will be considerate and show up for meeting on time. I will develop my time management skills.

My communication skills have developed where I enhance the ability to deal with problematic and uncooperative individuals. As well as improvement in my listening skills, and an insight on how an individual personalities affects others. My motivation skills were improved further in terms of encouraging others. My conflict management skills have improved due to the fact that I am more aware of how conflict arises.

After analysing my skills I realize these are my strengths and weaknesses and I think I need to improve on all of them.

I was expecting more collaboration with members not only related to the assignment. Some of them were cold meaning like they were not interested in the project. I found I did not put my all into the assignment because I remember I could have contributed more but I did not. At the beginning of the group there was no strict roles and responsibilities was set.

Basically I particularly enjoyed the event day because I like sociable events, the reason is that you get to talk to each other and visitors. I like the atmosphere of getting people to come to your stall, everyone one was rushing for customers or students as they pass by their tents. Everyone was motivated in their own way to raise as much money for their charity.

The main areas I had problems with were the lack of communication because of this area things were not done on time. Even though we had the technology for the use of communication some members never communicated.

The importance of this reflective report highlighted the areas in which I need improvement for example in terms of my skills and development. The evidence discovered in my report within a group it involves the task, the group and the individual. For an effective group there has to be proper communication, open mind and the idea that everyone listens to each other.

This is a diagram which represents an outline of my personal reflection within a group.

Work-based learning and HE

Date of Meeting: Meeting was held on Friday 5th March, 2009 at 11:30 am at the social learning space, Park Square

Specification need to be done for each activity

The financial cost overall was too high – As a result of this two members do into an argument because one was blaming the other about the high cost in that particular activity in which he or she presented.

All members responsible for doing the specification for each of their activities.

The model shows the three important aspect of group work which are achieving the task, building the team and developing individuals.

This window can be sued to change perception by the use of communication. 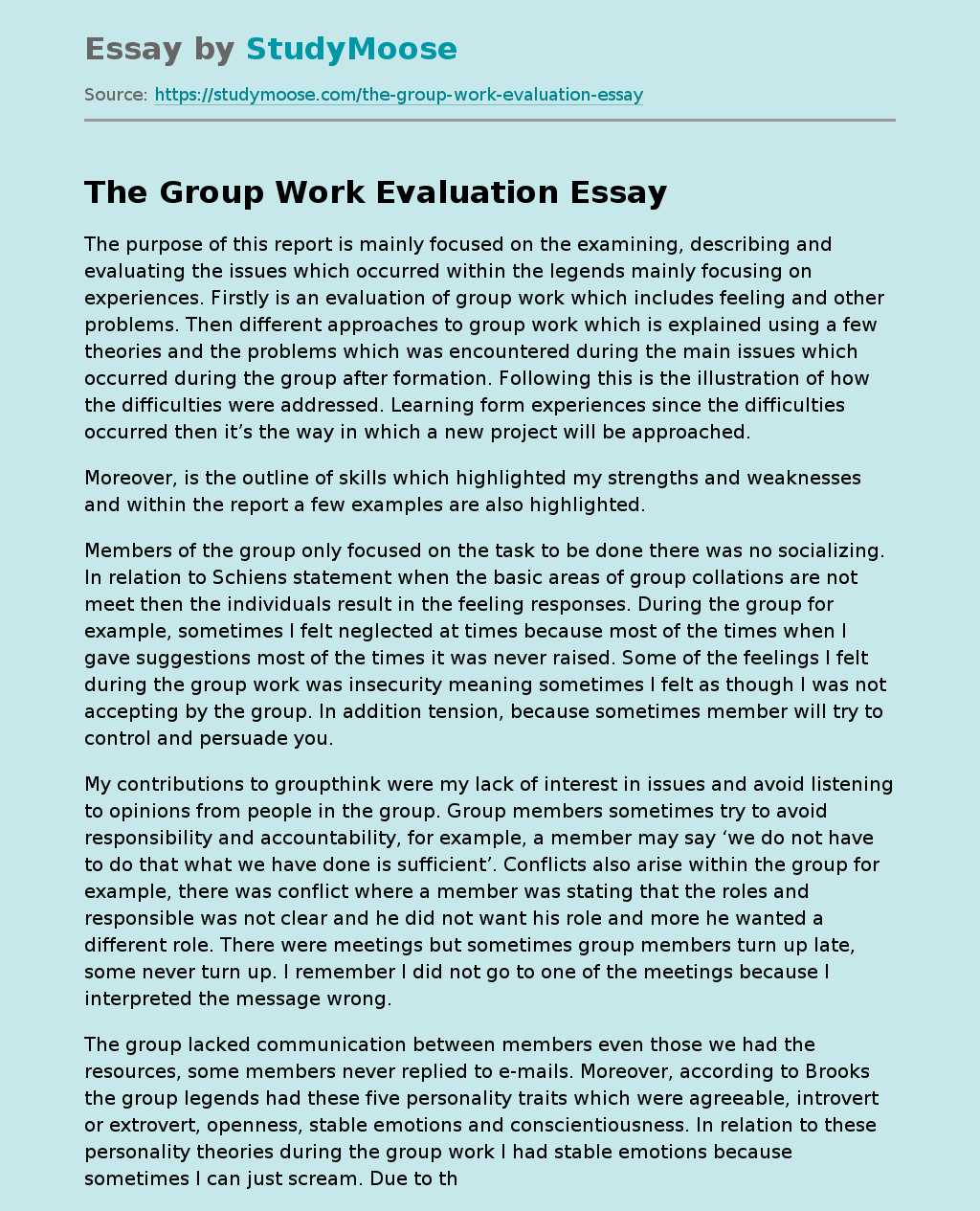