The Great Gatsby’s Central Theme and its Symbols

Many would argue that F. Scott Fitzgerald’s novel The Great Gatsby is about a hopeless romantic named Gatsby and his quest for Daisy the woman of his dreams. However, just below the surface underlies a theme that holds a much bigger meaning. If you dig a little deeper you will find that the central theme is really about humanity’s want to shorten the gap between desire and the Garden of Eden. Throughout the book there are various symbols in which reflect the theme itself.

Don't use plagiarized sources. Get your custom essay on
“ The Great Gatsby’s Central Theme and its Symbols ”
Get custom paper
NEW! smart matching with writer

These symbols include the green light which is located at the end of Daisy’s doc, the valley of ashes which is the epicenter of the “working class”, and the eyes of Dr. T.J. Eckleburg, a big billboard overlooking the valley of ashes. In the beginning of The Great Gatsby we are introduced to a young man named Nick Carraway whom is not only a main character of the novel but also the narrator.

In the summer of 1922, Nick moves from Minnesota to an area in New York populated by the new rich, a group who have made their fortunes too recently to have established social connections and who are prone to garish displays of wealth.

A place better known as West Egg. Nick is neighbors with a mysterious man named Jay Gatsby who he knows nothing about except that he lives in an enormous mansion next door and throws extravagant parties every weekend. Unlike most other West Egg residence, Nick was educated at Yale and has social connections in East Egg (old money) such as his cousin Daisy Buchanan and her hulky brute of a husband Tom Buchanan, which is actually an old classmate of Nicks from Yale.

One evening, Nick is introduced to Jordan Baker, a famous golfer and good friend of the Buchanan’s. It is through Jordan that Nick learns a tad bit of Daisy and Toms marriage. She tells him how Tom has a mistress, Myrtle Wilson, who lives in the valley of ashes, a depressing industrial waste land between New York City and West Egg. As summer progresses, Nick is invited to one of Gatsbys parties where he first encounters the great Gatsby himself, a surprisingly young charming man who has a thing for calling people “old sport”.

Nick later learns that Gatsby knew Daisy in Louisville 1917 and that in fact they were once in love before he left in search of becoming wealthy because “rich girls only marry rich boys”. Gatsby spends endless nights staring across of the lake at the green light at the end of Daisys doc because he misses her, and throws lavish parties in hopes that he will impress her because is still madly in love with her. Eventually Nick invites Daisy to tea, where she finds Gatsby and awkwardly rekindle their love, thus begins their affair. Over time Tom grows suspicious of his wife’s relationship with Gatsby, but it isn’t till the luncheon at the Buchanan’s that Tom realizes that Gatsby is in love with her. Even though Tom is being a total hypocrite and has been having an affair all the while, he is pissed that his wife could be unfaithful to him. Tom forces the group to go to town and they end up at the Plaza Hotel, where he confronts Gatsby. Gatsby tries to convince Daisy to confess her love for him and only him and to tell Tom that she is leaving him but Tom asserts that he and Daisy have history and that Gatsby would never understand because he cannot measure up to him.

Tom also announces to Daisy that Gatsby is a sham and that his fortune comes from bootlegging alcohol and other illegal activities. This sends Daisy into shock and she flees back to East Egg frantically with Gatsby not far behind. When Tom, Nick, and Jordan drive through the valley of ashes they find that Gatsby’s car had “coincidently” struck and killed Tom’s mistress, Myrtle. They hurry back to Long Island where Nick finds out from Gatsby that Daisy had been driving when they struck Myrtle, but Gatsby intends to take the fall for it. The day after, Myrtles husband George is told by Tom that car that had murdered his wife was owned by Gatsby. George jumps to conclusions and assumes that the driver of the car must have been her lover, goes to Gatsby’s only to find him at his pool and shoots him dead then shoots himself.

Nick even stages a funeral for Gatsby and yet no one showed up, not even Daisy. Nick then decides to move back to the Midwest in hopes to escape the emptiness and moral decay of life among the wealthy on the East Coast where Gatsbys dream of Daisy is corrupted by money and dishonesty, much like the American Dream. The central theme of this novel is not far from other works of American literature. The Garden of Eden is also introduced in a reading called Early American Literature 1620-1820. It explains how the puritans believed that they were “chosen by god” and how they first came to America in seek of “an earthly paradise” (153) to create their own Garden of Eden.

When Captain John Smith goes on to talk about America he says, “What greater satisfaction is there than hauling in one’s supper by dropping a hook and line into any plentiful river or steam” (153). By this, Smith emphasizes how America is such a spectacular place and that it is a paradise much like the Garden of Eden. This ties into the central theme of The Great Gatsby because every character in the book desires something, and it is shown through each symbol.

In the very first chapter of the Great Gatsby we are introduced to the mysterious green light. At first Gatsby seems to be reaching out to it, as if trying to capture it. Later in the book we learn that the green light seems to be directly off of Daisy’s dock, and is much so a symbol for Gatsby’s hopes, dreams, and future aspirations. This green light seems to take on a physical representation of Gatsby’s future with Daisy. It is even recognized in the final chapter. Fitzgerald compares the green light and the “green breast of the new world” (115), thus comparing Gatsby’s dream of rediscovering Daisy to the puritan’s discovery of America. So in a sense, Gatsby’s dream or quest for paradise is never really for filled because it is tarnished by his materialistic possessions, much like the corruption of America by our obsession for wealth and exploitation of superficiality.

In contrast to the green light, we are introduced to a place of sadness and despair known as the “valley of ashes” (Fitzgerald 16), a long stretch of foul land covered by remains of industrial ashes and succumb to materialism. It is positioned smack dab in the middle of East and West Egg, and is inhibited by the poor working class. It is a symbolization of the poor’s pursuit of wealth and ties into the central theme of the human quest for paradise which in this case for them is West Egg.

Just overlooking this moral wasteland, we find that there is an old advertising board with eyes of Doctor T. J. Eckleburg painted on it. In most cases it is seen as a resemblance of god, however it can also be a symbolization of materialism gone haywire. The material aspects of American dream are revealed through advertisement. Fitzgerald portrays this in chapter 7 in Daisy’s conversation with Gatsby when she tells him: “You resemble the advertisement of the man… you know the advertisement of the man—-“(232). It is in this statement that we can conclude that Daisy does not love Gatsby for himself, but for the superficial front he puts up. In this case Daisy’s idea of a quest for paradise is more so living in a materialistic world.

In conclusion, the green light, the valley of ashes, and the eyes of Dr. T.J. Eckleburg are all symbols in The Great Gatsby and tie into the central theme which is humanities want to shorten the gap between desire and the Garden of Eden.

The Great Gatsby’s Central Theme and its Symbols. (2016, Aug 14). Retrieved from http://studymoose.com/the-great-gatsbys-central-theme-and-its-symbols-essay 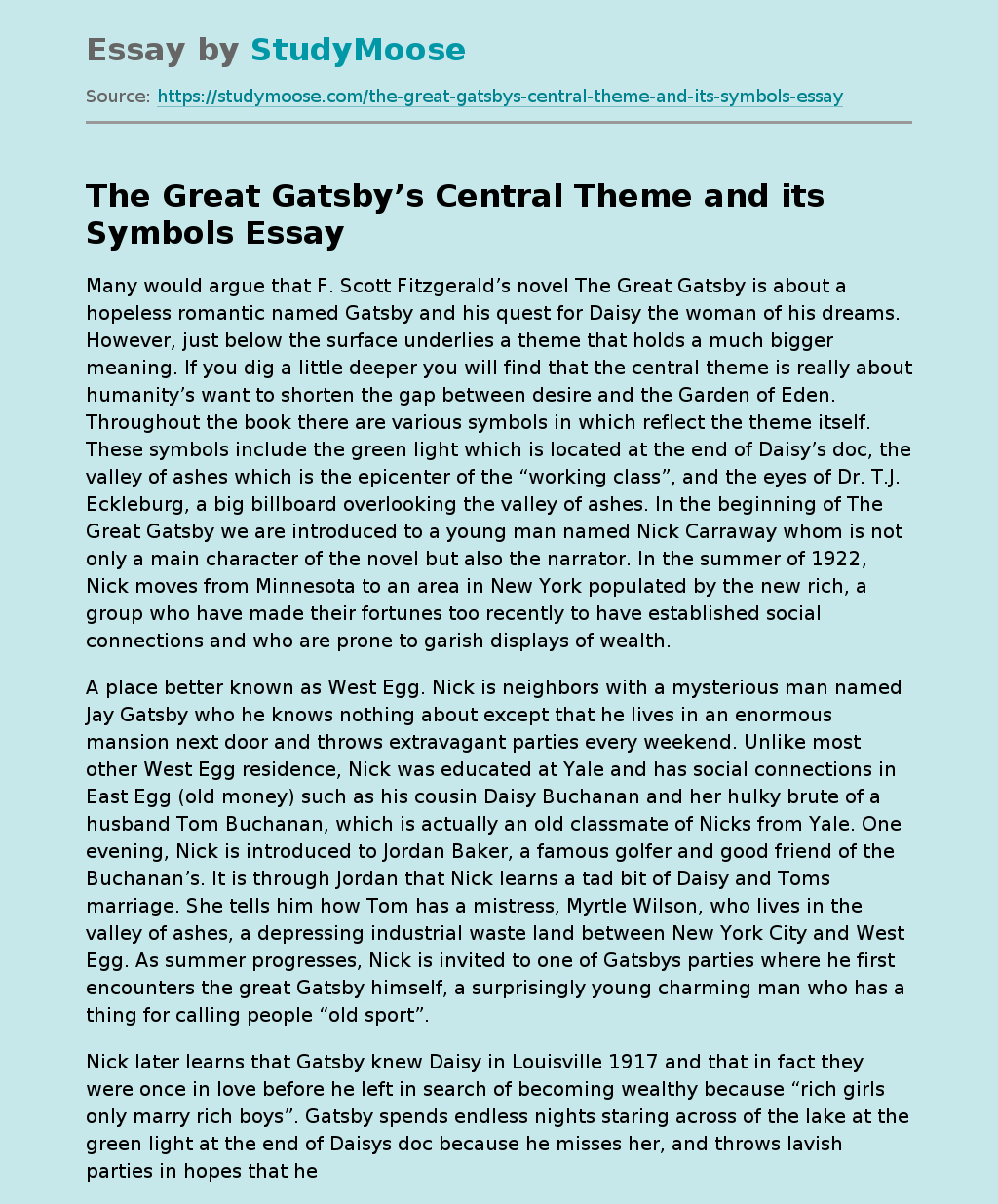