Violence is a central theme used in the novel ‘The Great Gatsby.’ By definition, violence is a behaviour involving physical force intended to hurt or kill someone or something and unfortunately, in almost every chapter of the Great Gatsby at least one violent or reckless act is displayed. Three major examples or symbols of violence portrayed in the book includes the characterisation of Tom Buchanan, the usage of cars and lastly, the death of Myrtle Wilson. Analysis of these examples show that F.

Don't use plagiarized sources. Get your custom essay on
“ The Great Gatsby; Theme; Violence ”
Get custom paper
NEW! smart matching with writer

Scott Fitzgerald, the author, uses violence as a mean to express the power, passion and mere ignorance of the characters in his book. Tom Buchanan is the embodiment of violence in the Great Gatsby. From the beginning, Buchanan is characterized by Fitzgerald as a wealthy, racist, abusive and arrogant aristocrat.

He has a strong need to exert or flaunt dominance over other people and uses violent means to do that. This is illustrated in the scene in chapter two where he breaks Myrtle Wilson’s nose after she taunts him by saying Daisy’s name.

This quote recounts the scene, “Sometime toward midnight Tom Buchanan and Mrs. Wilson stood face to face discussing in impassioned voices whether Mrs. Wilson had any right to mention Daisy’s name. ‘Daisy! Daisy! Daisy!’ shouted Mrs. Wilson. ‘I’ll say it whenever I want to! Daisy! Dai—“ Making a short deft movement Tom Buchanan broke her nose with his open hand.” Buchanan used physical force to put Wilson in her place, as his mistress and explicitly say that he overpowers her.

Tom did not apologise to Wilson or even acknowledge this incident later in the book and this conveys the idea that Tom does not care about the integrity of other people and uses violence quite a lot to see his way through and exert dominance over others. Another symbol of violence in the Great Gatsby is cars and their reckless usage by the characters in the novel.

Cars were new merchandise during the 1920’s and were then representative of wealth, passion and recklessness. Thus, the partying aristocrats of the 1920’s drove their cars with a passion for reckless, which often had an end result of violence. This passion is well portrayed in this quote from chapter 3, ‘Fifty feet from the door a dozen headlights illuminated a bizarre and tumultuous scene. In the ditch beside the road, right side up but violently shorn of one wheel, rested a new coupé which had left Gatsby’s drive not two minutes before….. they had left their cars blocking the road a harsh discordant din from those in the rear had been audible for some time and added to the already violent confusion of the scene.”

Furthermore, cars were involved in the accident that ‘violently extinguished’ Myrtle Wilson’s life; (Chapter 7) “The ‘death car’ as the newspapers called it, didn’t stop; it came out of the gathering darkness, wavered tragically for a moment and then disappeared around the next bend..………….. its driver hurried back to where Myrtle Wilson, her life violently extinguished, knelt in the road and mingled her thick, dark blood with the dust.” If Daisy who drove the car was more attentive to her driving, this may not have happened. This indicates how the characters’ ignorance of their surroundings or carelessness can be a source of violence too. Cars are symbols of violence because of their reckless usage by people and in cases like Myrtle’s, a substantial amount of carelessness is also involved. 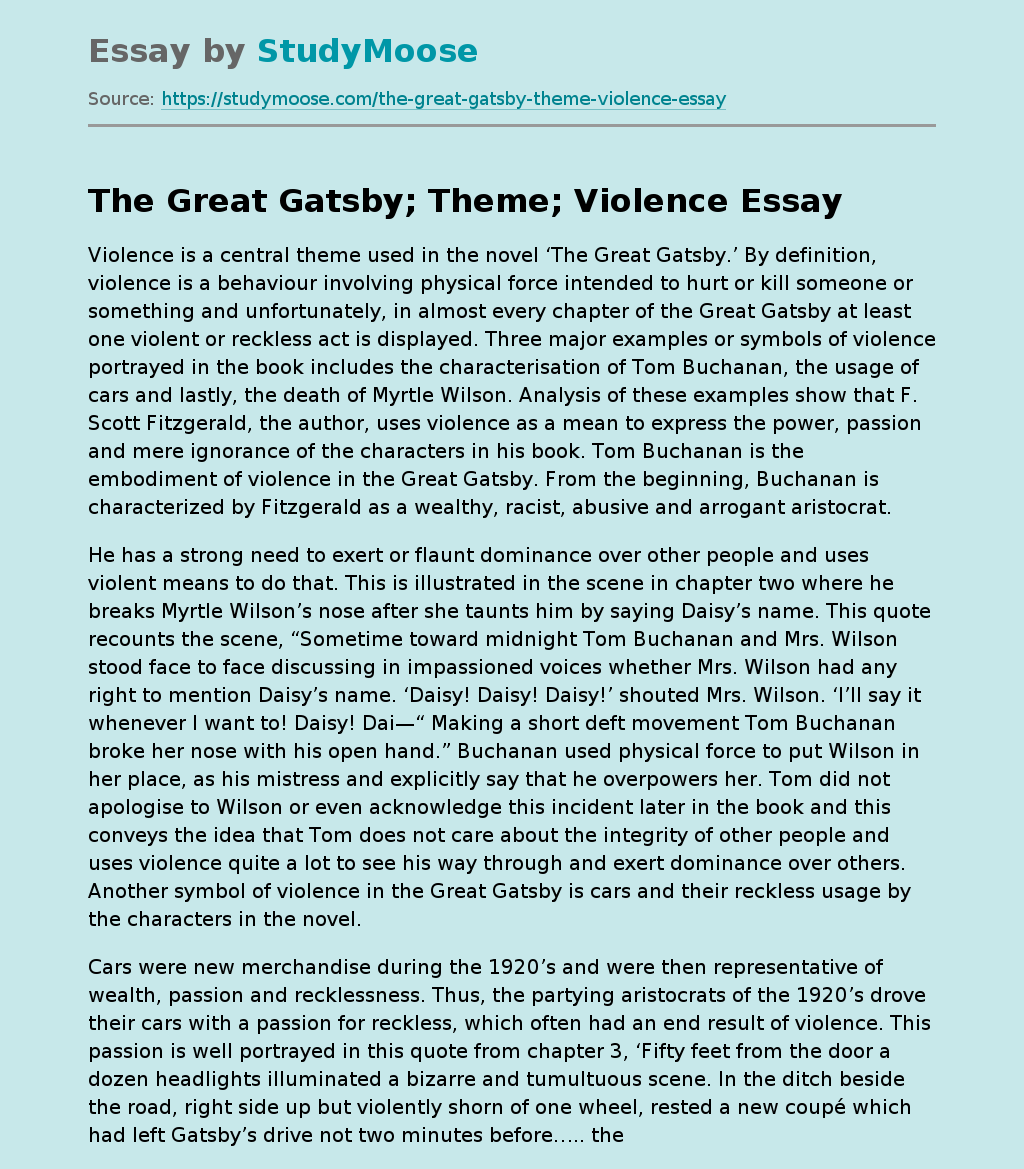