The Glasgow School School of Art

On a hill side west of Scotland, in the heart of the city of Glasgow, sits the Glasgow School of Art. The Art School became the center of the Arts and Crafts movement in the 1880’s and 90’s. The term Glasgow School generally refers to the group of artists and designers working with Charles Rennie Mackintosh, a central figure in the movement, at the school at that time. Symbolic symmetrical floral designs, Celtic imagery, Japanese art, elements of nature, and seventeenth century tomb stone lettering were influential elements of Glasgow style (tate.

Don't use plagiarized sources. Get your custom essay on
“ The Glasgow School School of Art ”
Get custom paper
NEW! smart matching with writer

The Glasgow style was led by a group of classmates dubbed “The Four”, which included Charles Rennie Mackintosh, Herbert MacNair, Margaret and Frances MacDonald. They met as students at Glasgow School of Art, and were brought together by headmaster Francis Newberry, who recognized similarities in their works. Together they created a wide range of glasswork, metalwork, furniture, posters, and jewelry (Mackintosh). The group was known for their distinctive and influential style that largely contributed to the art nouveau movement (tate.

org.uk). Their first exhibit at the 1896 Arts and Crafts Exhibition in London was not well received, and the Glasgow School of Art was mocked and ridiculed as “The Spook School” because of the ghostly and cryptic quality of their figures (artscrafts.org).

American painter James Abbott McNeill Whistler also made his contribution to the Glasgow style by sharing his enthusiasm for Japanese Art. These influences where felt by Charles Rennie Mackintosh and can be seen throughout his works. Artists of Glasgow style kept the foundation of the Arts and Crafts movement as created by William Morris, in style and anti-industrial sentiment (visualarts.com).

Sisters Frances and Margaret MacDonald, also known as the “Glasgow Girls”, played an important role in the development of women in the Arts and Crafts Movement. Previously women were not admitted to the Art Workers Guild. The Glasgow School of Art was also one of the first art schools to place the same importance on teaching women as men, which was unprecedented at the time (artscrafts.org). Newberry, the school director, allowed women to contribute and excel in leadership roles at the school (visualarts.com).

The Glasgow style embraced naturalism, romance, and realism; a revolt against the Edinburgh Scottish Art establishment, which “The Four” found oppressive. Trying to depict things as they actually were, they believed working outdoors brought their works closer to nature (historygraphicdesign.com). The artists expressed a distaste for conservative art that was popular at the time. Looking to move away from the hierarchy of genres, “The Four” focused on portraying nature, religion, and romance with free-flowing lines and angular forms (visualarts.com).

Charles Rennie Mackintosh was influenced by Frank Lloyd Wright to create spaces where the art and architecture were completely integrated into one harmonious unit. Francis Newberry had an interest in the Arts and Crafts movement and was greatly influenced by William Morris also. As Headmaster of GSA he introduced crafts including pottery, embroidery, metalwork, stained glass and woodcarving in addition to painting (artscrafts.org). The classic design element called the “Glasgow Rose”, remodeled after Aubrey Beardsley’s work, became a popular pattern for the movement. The rosebuds are a prevalent theme in the school building, meant to encourage the students to seek inspiration in nature (Glasgow Film).

Influence on Other Styles

The Glasgow movement greatly influenced the Vienna Secession movement, which also looked to counter the extremely floral designs of Art Nouveau (Meggs’). Mackintosh was so influential in the Vienna Secession that he was invited to design a complete room for the exhibit in 1900 (Encyclopedia). Austrian and German designers adapted the geometric structure of Glasgow style and were stimulated by the simplistic forms. They too rejected traditions of the time and explored new styles to express themselves (Britannica).

The Glasgow School movement was important to the development of the Art Nouveau style, as well as the beginning of women’s participation in art education and making a name for themselves as artists. Charles Rennie Mackintosh and “The Four” became world renown artists who showcased the Glasgow style through architecture, furniture, poster design, jewelry, metalwork, and glasswork which influenced and inspired others with their innovative designs. Modeled after the Arts and Crafts movement, Glasgow style valued high quality craftsmanship using a wide array of materials. This style was highly influential in the late 1800’s, and continues to inspire to this day, which is why I feel the designers involved in this movement should be recognized for their contributions to art history.

The Glasgow School School of Art. (2021, Feb 26). Retrieved from https://studymoose.com/the-glasgow-school-school-of-art-essay 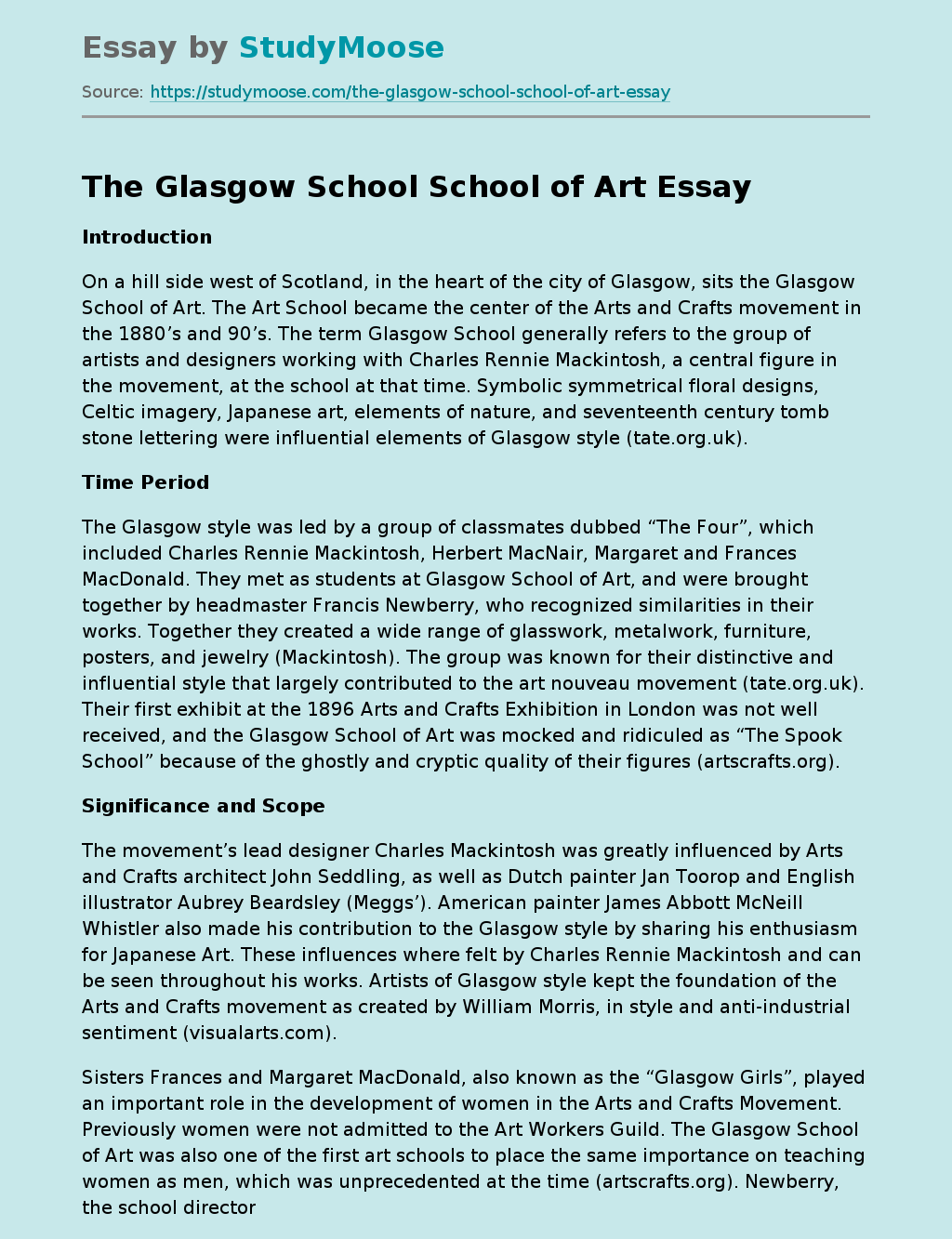