﻿The Geography of the Cold War: What Was Containment?

It was a glorious meeting. On April 25, 1945, at the Elbe River in Germany, two powerful armies met. Coming from opposite ends of Europe, the Americans and Russians had cut Hitler’s Germany in two. Now at the Elbe, soldiers from the Red Army of the Soviet Union reached out their hands to their American counterparts. It was a time for great happiness. World War II, the deadliest war in all of human history, was nearly over.

Unfortunately, the warmth of the handshakes did not last.

Don't use plagiarized sources.
Get Your Custom Essay on ﻿The Geography of the Cold War: What Was Containment? Just from $13,9/Page

The Soviet Union and the United States had serious differences. Their greatest difference was over a political and economic system called communism.

In its pure form, communism is a belief that private property should be replaced by community ownership. In the Soviet Union this idea was not easily accepted by the people. Russian leaders Vladmir Lenin and Joseph Stalin were ruthless in their elimination of those who had different ideas about Russia’s future. It is estimated that in the 1930s, Stalin was responsible for killing more than 10,000,000 Soviet people who he believe were in his way.

Soviet communists did not like capitalism. They opposed private ownership economies of the United States and its allies. Russian leaders believed that capitalism was doomed and that communism would spread throughout the world. This caused great tension and the emergence of a new kind of war, a Cold War. Mistrust ran deep. In the words of Winston Churchill, it was as if an “iron curtain” had been drawn between the Soviet-controlled countries in Eastern Europe and the Western democracies.

The Soviets had suffered terribly in World War II, losing more than 27,000,000 soldiers and civilians. Stalin was determined that Germany would never be able to strike Russia again. To protect Russia, Stalin wanted a buffer zone in Eastern Europe. It was no secret that Stalin and his successors wanted to expand the Soviet Empire.

﻿The Geography of the Cold War: What Was Containment?. (2016, Mar 09). Retrieved from https://studymoose.com/the-geography-of-the-cold-war-what-was-containment-essay 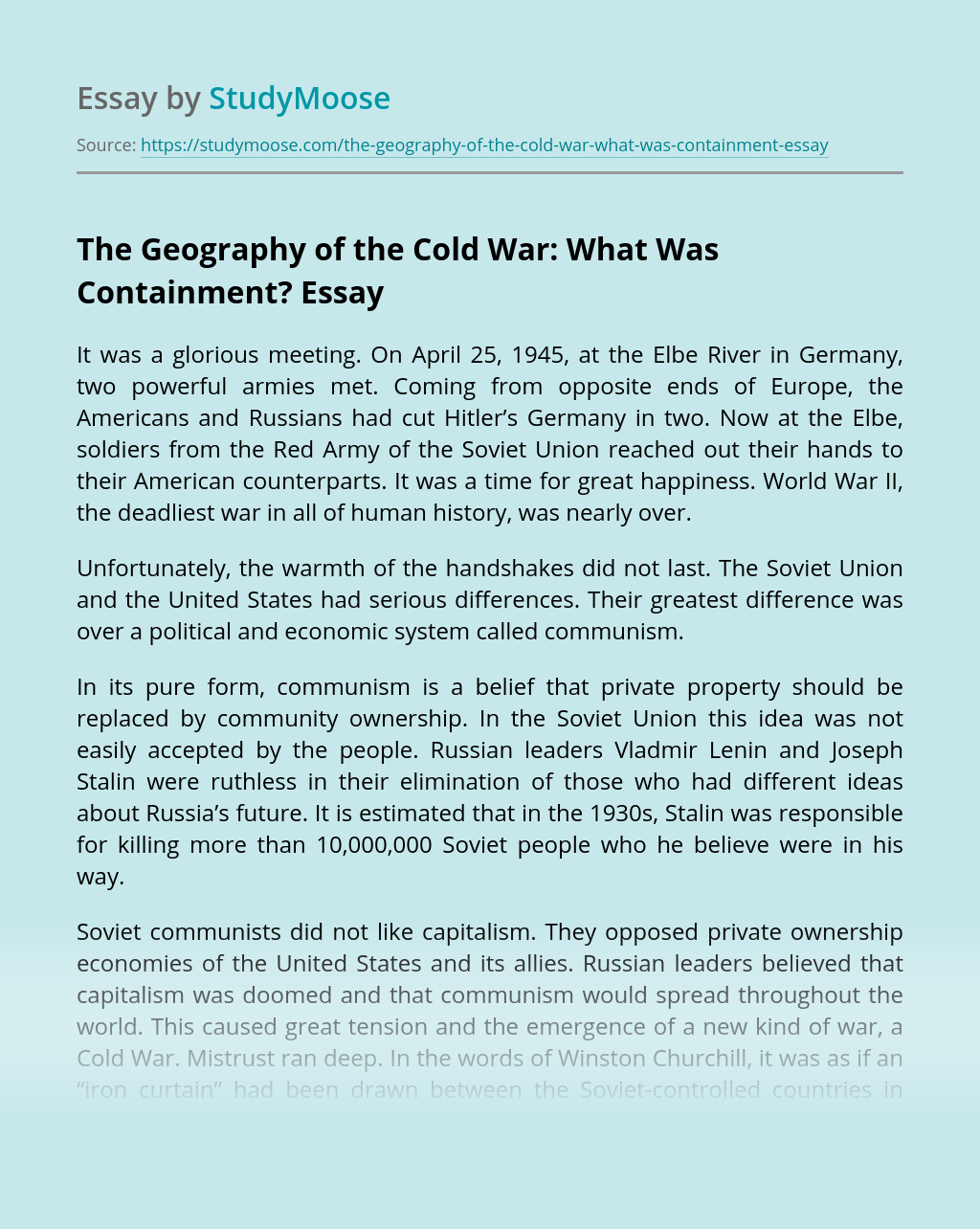 Executive Summary EasyInternetcafe was started by the easyGroup in the midst of the Internet boom in the United Kingdom. The mission of this company is to provide customers with access to the internet at the lowest possible cost. After the Internet Investment bubble burst, easyInternetcafe is experiencing a loss in profits and is struggling to...

Human Impacts on the Sustainability of Groundwater

The function of this lab is to reveal the sustainability of groundwater, if human advancement continues, at the same rate it has been, over the last couple of years. Over the last 50 years our water need has actually tripled, which is triggering water level all over the world to fail, and when these aquifers...

Case Study The role of social work intervention is an intensely complicated one in which legislation passed in recent years has had a significant impact. On the one hand this legislation has worked so that social services have become increasingly integrated with various other local authority departments so that they can work together in effective...

Roman Polanski's treatment of Act One Scene One of Macbeth

Give a detailed description of Roman Polanski’s treatment of Act One Scene One of Macbeth. State how effective you found this realisation. William Shakespeare created an assortment of plays with various themes but each with the same intrinsic values, which have attracted writers and producers to customise and shape these plays into their own adaptations...

In Barter by Sara Teasdale