The Functions of Symbolism in Literature

The Functions of Symbolism in Literature In literature, almost all writers like using symbols to extend meaning beyond the prosaic. A symbol is a figure of speech in which an object, person or situation represent something in addition to its literal meaning. Many writers—in fact, most or all authors of fiction—make the symbolic use of concepts and objects as rhetorical devices central to the meaning of their works. Cisneros, O’Connor, and Poe, for example, used symbolism extensively, to suggest different objects and represent different concepts.

Don't use plagiarized sources. Get your custom essay on
“ The Functions of Symbolism in Literature ”
Get custom paper
NEW! smart matching with writer

They use different types of symbolism to vividly demonstrate the personalities of certain characters, the tone of stories, and reveal certain backgrounds of society. If we read the book “House on Mango Street” on the surface level, we will not be able to understand Esperanza’s desire and her personalities. She lives in a small, crooked, and drab house, which represents the restricted options available to Esperanza as a poor Hispanic woman.

She has a dream house: “house all my own.

[w]ith my porch and my pillow, my pretty purple petunias. Only a house quiet as snow, a space for myself to go, clean as paper before the poem.” (Cisneros, Sandra) This dream house reveals her hope for something better when she grows up, a hope to always have something better in the future. In this way, the house is symbolic of protection and stability from the difficulties of childhood. It gives Esperanza a place to feel, to create, and hold on to dreams of a better future for herself.

This symbolism also shows the hopeful tone of the book. Another important symbol in this book is the four trees outside of Esperanza’s window. “Four skinny trees with skinny necks and pointy elbows like mine. Four who do not belong here but are here. Four raggedy excuses planted by the city.” (The House on Mango Street) We can tell from the book that she compares herself to them and admires them for growing while being anchored. She has strength and bravery inside of her just like the four trees have.

Esperanza does not belong on Mango Street, as the trees do not belong in the city; the trees are surrounded by cement and Esperanza by poverty and low expectations. Both she and the trees persevere despite their poor living conditions and the obstacles in their paths. A pair of high heels symbolizes escape because for the first time when her neighbor gives her and her friend Lucy a pair; which is what Esperanza wants to do strongly is running and walking away to escape from life on Mango Street and discover who she truly is. Esperanza lives in a society dominated by men and, ni hao wo shi ni de wan ba dan qing sonf ni women are treated by second class citizens. They are looked down by men whether they are boyfriends, friends’ fathers or husbands. Shoes are a reminder for her as a child of her desire to be attractive but her struggle to also be independent and equal. Symbolism plays an important role in the book because there are many events in Esperanza’s life that are hard to fully explain in words, but symbolism helps explain them by comparing the event to something completely different then what is happening in the story.

Symbolisms are also well liked by Flannery O’Connor in the fiction “A Good Man is Hard to Find.” The grandmother is one of main characters in this story. She portrayed as a “good” women on the surface, since she has faith in God and doing right in her live. She is stubborn and represents old southern culture. For instance, “[t]he old lady settled herself comfortably, removing her white cotton gloves and putting them up with her purse on the shelf in front of the back window. Her collars and cuffs were white organdy trimmed with lace and at her neckline she had pinned a purple spray of cloth violets containing a sachet.” (Flannery O’Connor) The grandmother also wears a hat which has “a navy blue straw sailor with a bunch of white violets on the brim.” The only reason she wears the hat and dresses like that is showing that she can be easily recognized by people as a lady if a car accident happens. The grandmother is ridiculous and seems she does not care about the fact that she and her family are dead in this scenario; the only thing that matters is her standing as a lady.

This reveals grandma’s selfishness and pushy nature. The hat is a symbol of her moral conviction. When the grandmother does become involved in a car accident; the hat falls apart. After she is thrown from the car and the family is facing the Misfit, the brim of the hat falls off. She drops the broken hat as her self-conception as a lady dissolves. Not only does O’Connor uses symbolisms to reflect the character’s personalities, but also to reveal the story’s tone and the societal background behind that time. The story’s primary action involves a family car trip on which they encounter an escaped criminal and his gang. If the grandmother had not insisted they detour to see the old house, which she realized too late was in Tennessee, not in the part of Georgia where they were, the family would have escaped the disaster. The old plantation is a symbol of grandmother’s past in which she believes people were more decent and better than they are today.

The realization that the plantation is not where the grandmother thought symbolizes that the past is often distorted. These symbols show that the tone of this fiction is ironic. The fact that the family had strayed from the main path to an unimportant side road, where they were killed, symbolizes how people often stray from Jesus and follows the wrong path spiritually. Even the town’s name “Toombsboro” is a symbol of death. On the way to the old plantation, there were clouds in the sky, the clouds represent the grandmother’s superficial faith. In case of her death, she dressed herself with the purple spray of flowers. It was as if she is taking death lightly; however, when she knew she was going to die, the grandmother started to desperately preach the gospel to the Misfit. The sky is cloudless and clear at the end of the fiction. The Misfit commented, “Ain’t a cloud in the sky,” “Don’t see no sun but don’t see no cloud neither.” (A good man is hard to find)

The clouds had faded away and the sky was empty, just like the grandmother’s faith was empty. Those symbols represent people’s lack of faith post World War II. Lastly, I want to discuss the symbols used in “The Black Cat” written by Edgar Allan Poe. In this story, the narrator is portrayed as a man who loves animals, has a warm heart, and is content with his marriage. Throughout the story he becomes moodier, more irritable, and inconsiderate to those around him. The main cause for his change is primarily due to alcohol consumption. The first cat is one of the most important symbols of this story. It is symbolic of the narrator’s evil heart. The first black cat was named Pluto, which is taken from Greek mythology. The name Pluto is another name for the Roman God of the Underworld or lord of the dead. One night the narrator came home quite intoxicated and frightened the cat. In return the cat wounded the narrator’s hand.

The archetypal symbol of the color, white, projects neutrality. It also represents America staying neutral while the other parts of the world were full of wars and death. People in the wars are ambitious and cruel is another societal backgrounds and that the story wants to show. Cisneros, O’Connor, and Poe’s simple, yet profound literary works continue to dazzle readers today. They symbolize the things we are familiar with in life to help us understand the stories on a much deeper level. “House on Mango Street,” “A Good Man is hard to find,” and “The Black Cat” are wonderful examples that use symbolism as an integral component of fiction to enrich the narrative by pulling the messages to the level of unconscious and anchor, set the tones, enhance the stories and characters.

The Functions of Symbolism in Literature. (2016, Apr 28). Retrieved from https://studymoose.com/the-functions-of-symbolism-in-literature-essay 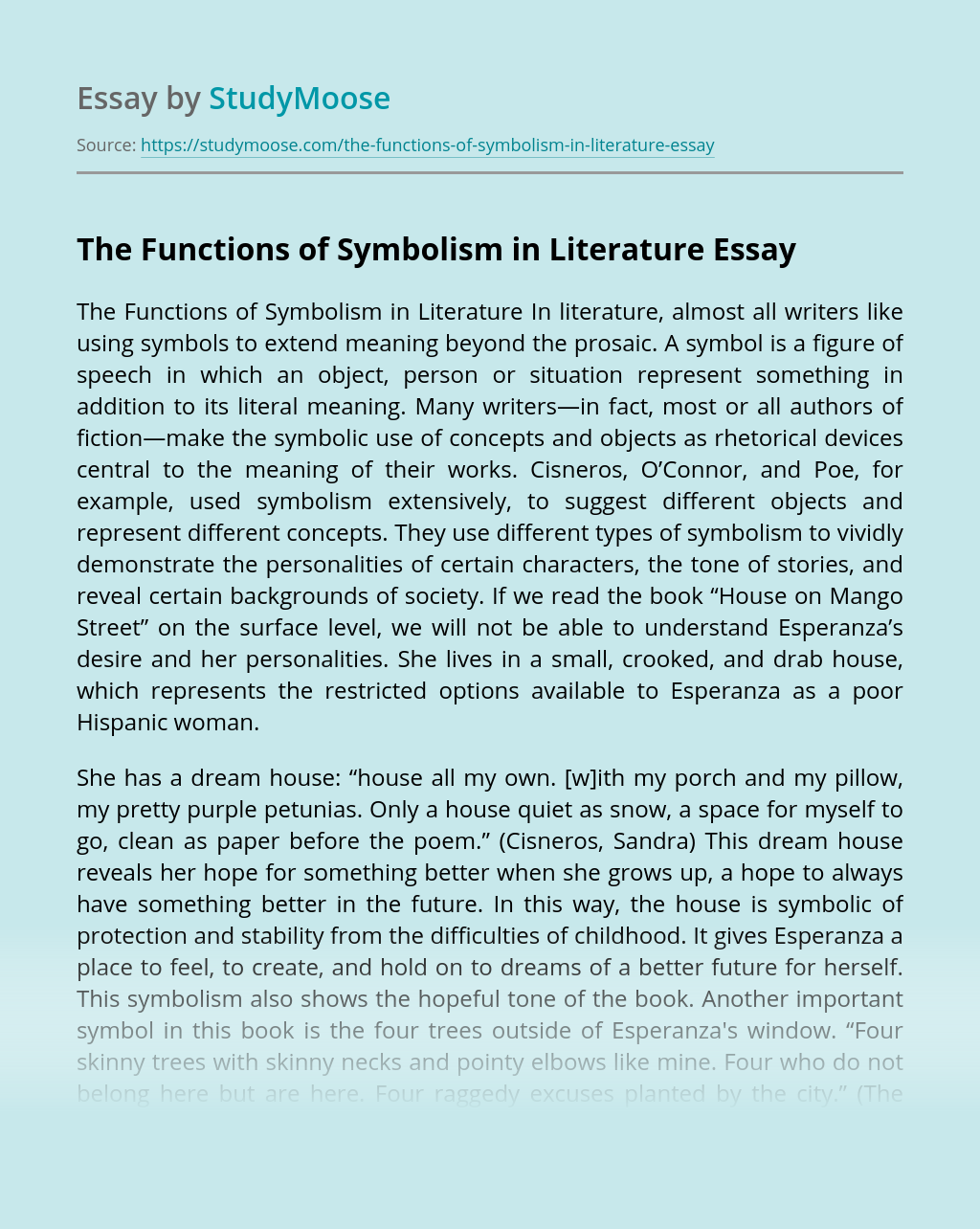