The Film Is Not Yet Rated

At some time in your life, you probably have been prohibited from watching a movie either by a doorman at a movie theater or by your parents, simply because of the rating. I have to say, I never really paid attention to how films were rated, or who was behind the rating process, until viewing This Film Is Not Yet Rated. This independent documentary, distributed by Netflix, IBC Films, and BBC Films, looks to unveil the truth behind the Motion Picture Association of America’s rating system, through personal interviews and undercover investigations.

Don't use plagiarized sources. Get your custom essay on
“ The Film Is Not Yet Rated ”
Get custom paper
NEW! smart matching with writer

The main characters starred (Kirby Dick, Jack Valenti, Becky Altringer) all provide their unique and personal opinions of the MPAA and film rating process. This Film is Not Yet Rated is a mentally and energetically engaging documentary that helps answer questions previously unknown to the public.

This independent documentary was released on September 1, 2006, after premiering at the Sundance Film Festival. The original cut of this film received a NC-17 rating; however after an appeal, the new version was “not rated”.

The setting of the documentary is real-life locations that are mostly shot in the daytime. Personal interviews in the film are shot while the subject(s) were seated in personal office rooms or outdoors. Most of the undercover investigations, fueled by Becky Altringer, Kirby Dick, and Lindsey Howell were shot around MPAA office building surroundings, and nearby locations and restaurants in Los Angeles. At times, different film techniques, such as hidden cameras were employed to prevent them getting caught and to suggest the practicality and confidentiality of the investigation.

The film intermittently transitions to show different scenes from movies that were under scrutiny by the MPAA ratings board, such as “Team America”, “The Cooler”, “The Dreamers”, etc.

We follow Kirby Dick and his team (Becky Altringer and Lindsey Howell) in a private investigation to unveil the identities of the MPAA rating/appeal board members. Although Jack Valenti, the past president of MPAA, claimed that the rating/appeal board members represented the average parent, the people responsible remained hidden in the darkness. Much of the investigation is spent finding their names, backgrounds, and past experiences. The film also discusses controversial issues of why a film receives its’ rating and particular feedbacks. The issues between violence and sexual content, homosexual vs. heterosexual scenes, and male vs. female situations, are all unraveled and criticized by both film critics and makers. Interviews are also a key element of this documentary. All of the interviews help to convey topics such as how the treatment of ratings have changed over time, the lack of clear sense of applied standards/rater training process, and the affect of a certain ratings on the market of a film.

The private investigation to disclose members of the MPAA is conducted on behalf of Kirby Dick. Dick hires detective Becky Altringer to conduct the investigation. Altringer begins her investigation by parking her car outside of the MPAA’s common building and taking down license plate numbers and pictures of employees. Jack Valentini, former president of the MPAA, is another key character in this film. Throughout the documentary Valentini and his staff are ridiculed for their irresponsibility and indifference in the rating process. The MPAA’s empowerment of the U.S Film business puts the “whole world in their hands”, and filmmakers like Matt Stone (maker of “South Park”), label the MPAA as narrow-minded and oppressive.

Director Kirby Dick and cinematographers Shana Hagan, Kirsten Johnson, and Amy Vincent all work together to shoot This Film is Not Yet Rated. Many film techniques are employed such as voice-overs, interviews, and some forms of stock footage to convey the historical aspect and origin of the MPAA and government censorship. Voice-overs are primarily used to publicize both negative views towards the MPAA and the rating systems effect on Western culture. Interviews in this film provide key evidence of the discrepancies the filmmakers see in the ratings given to their movies, and their reactions. Almost the entire film is shot in actuality, which is contrasted from fictional films that utilize scripted plots and manmade sets.

Overall, I enjoyed This Film is Not Yet Rated, and the film allowed me to gain an insight into the rating system and the MPAA. Although the MPAA still operates behind the curtains, and choose to not disclose their staff, it is crucial that they someday operate in the public sphere to avoid confrontation and the falsification of information. Kirby Dick’s documentary takes a big step in the right direction for film businesses, after he and his team successfully reveal the MPAA board members. The film does an excellent job capturing the viewer’s attention with its use of mockery and comedy in various scenes to criticize the entertainment industry and illustrate how the MPAA operates in a preposterous and mysterious manner.

The Film Is Not Yet Rated. (2016, Nov 05). Retrieved from https://studymoose.com/the-film-is-not-yet-rated-essay 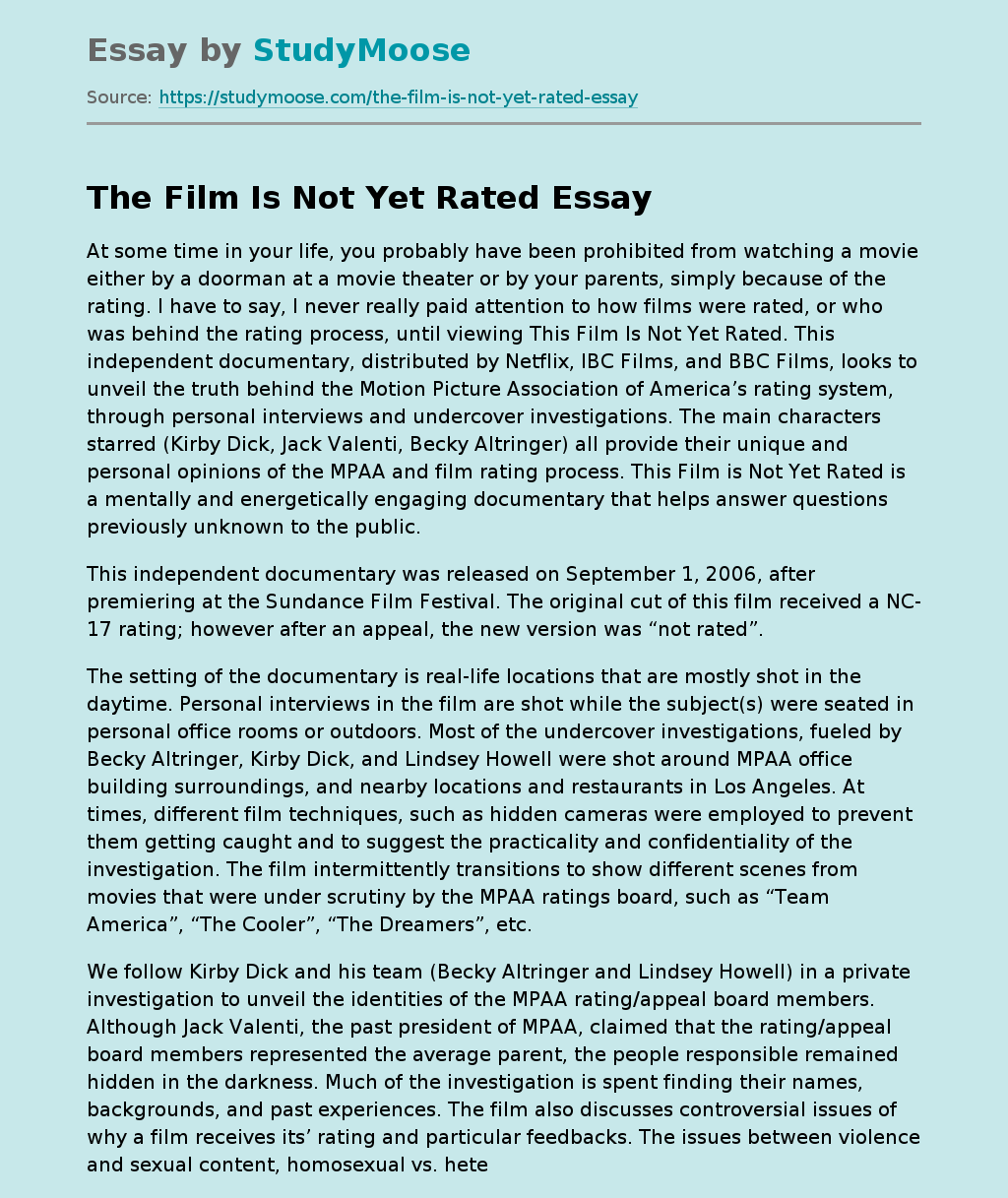