The Federalist and Anti-federalist

The United States Constitution was a product of intense public debate on a number of controversial issues. The major issue that divided Federalists and Anti-Federalists was the size of the republic. This debate resulted in a series of articles published in American newspapers in 1787 and 1788, the most famous of which were authored by Robert Yates (Brutus) and James Madison (Federalist 10).

Brutus argues that, unlike a small republic, a country occupying a vast territory and containing a huge population like the United States of America can’t be a successful and prosperous republic for a number of reasons.

Don't use plagiarized sources. Get your custom essay on
“ The Federalist and Anti-federalist ”
Get custom paper
NEW! smart matching with writer

First, in a large republic citizens are unable to influence the public welfare policies and uncontrollable abuses are more frequent and serious than in a small republic. Second, citizens in a democratic republic must be able to assemble for deliberations in vital issues.

Only in such cases will they be the sovereign in their country and their will can be fulfilled. However, this kind of government is possible only in a small republic confined to a relatively small territory.

Third, a certain number of citizens elected by the people and empowered to make laws or decisions related to various matters must know the people’s attitude to particular laws or issues. Since it is not possible in a large country, this small number of individuals, not the people, is the true sovereign. That is why, Brutus concludes, only a small republic can have a true democratic government and never a large and multimillion one like the United States (Brutus, 1787).

Another Brutus’ argument against the Untied States as a large republic is that the country includes diverse cultures, interests, habits, customs, sentiments, etc. Elected government officials representing diverse interests of heterogeneous groups would always contend with one another or make laws that would be suitable for one state but unsuitable for another one. Only in a small republic with homogeneous population and interests can government operate quickly and smoothly and efficiently promote the public good (Brutus, 1787).

The national government representing such a large and diverse country will never be a perfect authority being able to establish justice and domestic tranquility or promote the public welfare. For some states, the laws made or policies pursued by this government will meet their needs and correspond to their interests. Still for other states, they will be oppressing and unacceptable. Under such circumstances, the government will be “like a house divided against itself” which is an absurd idea (Brutus, 1787).

Brutus fears that the United States Constitution grants great and uncontrollable powers to the federal legislature which can make all laws necessary for the proper execution of its functions. Such powers would lead to the annihilation of other state governments and impose on the whole country the will of one single government. It will eventually result in the subversion of the state authority by one person or a group of persons (Brutus, 1787).

From his perspective, Brutus was correct. The thirteen American states consisted of a diverse population pursuing different interests and were extended over a large territory. A single national government could not consolidate all the states and govern them efficiently if the country were to become one large republic.

Every state had a relatively homogeneous population and common interests and was extended over a much smaller territory than the whole country. That is why only state governments could know what is better for their inhabitants and would manage them more efficiently. It seemed obvious that the political model of thirteen small republics managing their own affairs and headed by a federal government in certain national matters only would be more successful than a large and cumbersome republic (Brutus, 1787).

In a 1780 letter to John Scollay, Samuel Adams argues that people could be free only as long as they remain virtuous. Virtue was a central point to many Anti-Federalists which they believed was an animating principle of a republic. Adams expresses his concern that many people lost their virtue and by focusing on extravagancy, luxury, and idleness they diverted their minds from their liberties (Adams, 1780).

For Madison, virtue and homogeneity can’t form the basis for a successful republic. Homogeneous society provides good opportunities for the spread of factions, which will not be balanced by other groups, may be difficult to control, and oppress the rights of other citizens. Factions are less likely to succeed in heterogeneous society because the interests and goals of one factious group will be always opposed or balanced by those of other groups (Madison, 1787).

According to Madison, a large republic provides the solution to the problem of factions. Factions, that is, groups of citizens united behind a particular passion or interest adverse to the rights and welfare of the public, may become quite influential in one state. For example, a religious group may evolve into a political party and influence the public life in one part of the Confederacy. But the fact, that there is a variety of other religious groups across the country is a safeguard against its spread to other states. A wicked project may be successfully launched by a faction within one state, but is unlikely to succeed in the whole country. A large republic is, therefore, an efficient tool to control any danger from factious movements (Madison, 1787).

For Madison, the latent causes of factious movements stem from human nature. Civil society is characterized by different views on issues such as religion, government, education, etc. People holding such different opinions are divided into different parties or groups and are loyal to their ideas or leaders. Inflamed by their principles and passions, such groups will normally feel and show animosity towards other groups and their ideas.

These hostile feelings between different parties are very likely to prevent them from cooperation for their common good, result in attempts to oppress each other, and lead to conflicts. Madison argues that since such behavior is conditioned by the very nature of man, civilized society can’t avoid the clash between different views, groups and classes, and factions will always be a source of problems that society will have to solve (Madison, 1787).

Madison is sometimes referred to as one of the first pluralist political scientists. He studied the history of many ancient and modern societies, parties, factions, and leagues.

He analyzed different political systems, the theory and practice of politics, and political behavior. As we can see from The Federalist No. 10, Madison thought that the existence in a civilized nation of many groups belonging to different races and social classes and holding different political, religious, etc beliefs and ideas was normal. However, he acknowledged that pluralism is also a source of various conflicts and stressed the necessity to provide solutions to these conflicts and regulate the behavior of various groups. He adopted a philosophical and scientific approach to the issue of pluralism and maintained that it could be better addressed in a large republic (Madison, 1787).

Some commentators characterize the American political tradition as the interplay between the Federalist and Anti-Federalist perspectives. I think they mean by this that since the Constitutional debate in the second half of the 18th century, the theoretical discussion and argumentation as to what the national political system should be has never ceased. Politicians and political scientists still argue over the powers to be exercised by the federal and state governments in managing the public life and which model is better: a large national republic with a central government invested with large powers or a union of small republics (states) with a national government having its powers reduced to certain areas only. 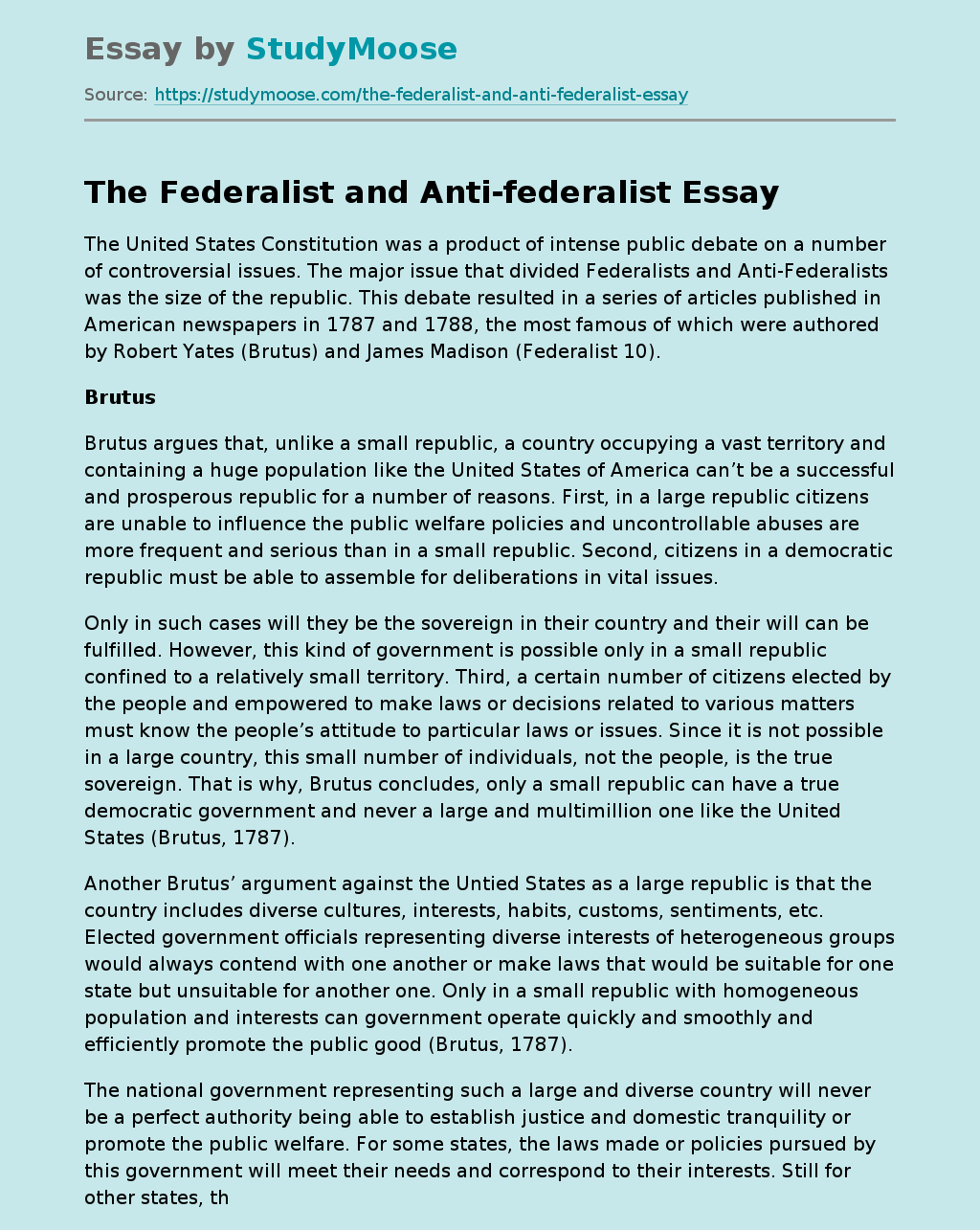