The Famous Horror and Detective Fiction

The famous horror writer ‘Edgar Allen Poe’ first introduced detective Fiction in 1841 with ‘murder in the rue morgue’. Although Mr Poe was the creator of detective Fiction, he was not the one to make it as popular as it is today. Readers were more intrigued by Poe’s creative genre ‘Horror’. Poe’s ‘murder in the rue morgue’ had also introduced the five traditional elements, the most important of all was ‘the superior detective’ known as ‘C. Auguste Dupin’, he had a method of deduction and was very eccentric.

Don't use plagiarized sources. Get your custom essay on
“ The Famous Horror and Detective Fiction ”
Get custom paper
NEW! smart matching with writer

Now in every detective Fiction story or TV programme their contains the Five traditional elements ‘the perfect crime, the wrongly accused suspect, superior detective, dim witted police and the surprise ending, each one more essential than the other. Detective fiction was at its peak during the late nineteenth century for that was the time of ‘Jack the Ripper’, a cunning murderer who was never found. The mobs were intrigued by this whole situation, how it started and how it ends.

To quench their appetite for mystery and suspense they would read detective fiction books.

The most popular out of all the writers would have been ‘Sir Arthur Conan Doyle’. His stories had a different focus point. While other writers are focusing on the plot, Sir Doyle would have been showing of his detective’s intelligence. The superior detective would have solved impossible cases, have ridiculous and controversial theories, suspect clues with little or no evidence but at the end of the day he was the one to catch the criminal.

The superior detective was known as ‘Sherlock Holmes’ with his right hand man Dr Watson. In any one of Sherlock’s stories Sir Doyle would have focused his attention on Holmes, the story would revolve around him on his thoughts and actions. One of Sir Doyle’s famous stories was the ‘Speckled Band’ that was about a young woman who died in a perfectly humane situation however there is little evidence to who or what did it. The ‘Speckled Band’ contains all the essential criteria, the perfect crime. Etc.

The perfect crime committed was the death of Julia Stoner. Their was very little evidence of murder and how it could have been committed, For example her bedroom door was locked, her windows were barred and their was no sign of blood, bruises or any other form of violence. The Superior detective was clearly stated after making remarks to Dr Grimsby Roylett about the ticket leaning over his pocket and the state of his coat. This gives us an example of Sherlock’s excellent observational skills and his superiority. “…I observe the second half of a return ticket in the palm of your left glove.” From observing this Sherlock realises that he arrived here on public transport.

In my view the wrongly accused suspect were the Gypsies and the sister of Julia. The reason for the Gypsies is because they are complete strangers to the family, who knows what they were capable of doing. The reason for Julia’s sister is because when she was speaking to Sherlock, he found her to be tense and he had the feeling as if she was hiding something from him. “…Have you told me all”. Sherlock had found her tense by observing her body language. This also shows us the intelligence of Sherlock.

The ending came to quite a surprise, however I wasn’t completely shocked to hear that the culprit was “…a swamp adder”. I knew that Dr Roylett kept exotic animals and I also thought Dr Roylett did it. My theory was correct about it being the Dr, but not completely. The snake killed the girl but the mastermind behind the death was the Dr. Although the story did not contain any police, the story itself states police as dim witted for example Julia’s sister goes to Sherlock to solve the crime. Here she knows the police haven’t got the intelligence to solve the crime.

Doyle’s rural setting of where the incident happened was colourful and natural. You would never think anything sinister could happen however when setting eyes on the location of the death, there was a huge contrast. Watson describes the setting “…there was a strange contrast between the sweet promise of the spring and this sinister quest upon which were engaged”. The surrounding was very colourful, no prisons, no insane asylums, there were no sinister vibes except for the ones coming from the house. I suppose the setting makes it to be a perfect crime but when Sherlock and Dr Watson set their eyes on “Stoke Moran” it would of narrowed down the suspects to those in the house.

Although the outside atmosphere was pleasant Watson felt a huge contrast between both. ” The building was of grey …two curving wings…in one of these wings the window was broken, and blocked with wooden boards”. Stoke Moran seemed to be mysterious but the only thing about unusual about it was the presence of that Dr Roylett who was a strong bitter man who kept wild animals in his premises.

Another one of Sir Arthur Conan Doyle’s books was the ‘the blue carbuncle’. In this Sir Doyle emphasizes a great deal on Sherlock, his predictions and theories. When reading ‘the blue carbuncle’ you get so much information from one piece of evidence that story loses the plot. When Sherlock is examining the evidence Sir Doyle is trying to tell the readers that Sherlock is so intellectual there is nothing he can’t solve.

The piece of evidence Sherlock was examining was a hat, although to a normal intellectual being like Dr Watson you wouldn’t find any clues about that hat. Sherlock came up with a great deal of conclusions and suggestions from a plain black top hat. Some of the conclusions made towards the hat by Sherlock would now be very controversial “…it came right over the forehead and settled upon the bridge of his nose”. Here Sherlock suggests that he is an intellectual man just by the size of his head “…It is a question of cubic capacity…a man with so large a brain must have something in it”. There were also suggestions about the hat that were more believable and more obvious to see “… goes out a little, middle-aged, has grizzled hair which he has had cut within the last few days, and which he anoints with lime-cream” but even Dr Watson failed to see these clues when glancing at it, first time.

The Famous Horror and Detective Fiction. (2017, Oct 18). Retrieved from https://studymoose.com/the-famous-horror-and-detective-fiction-essay 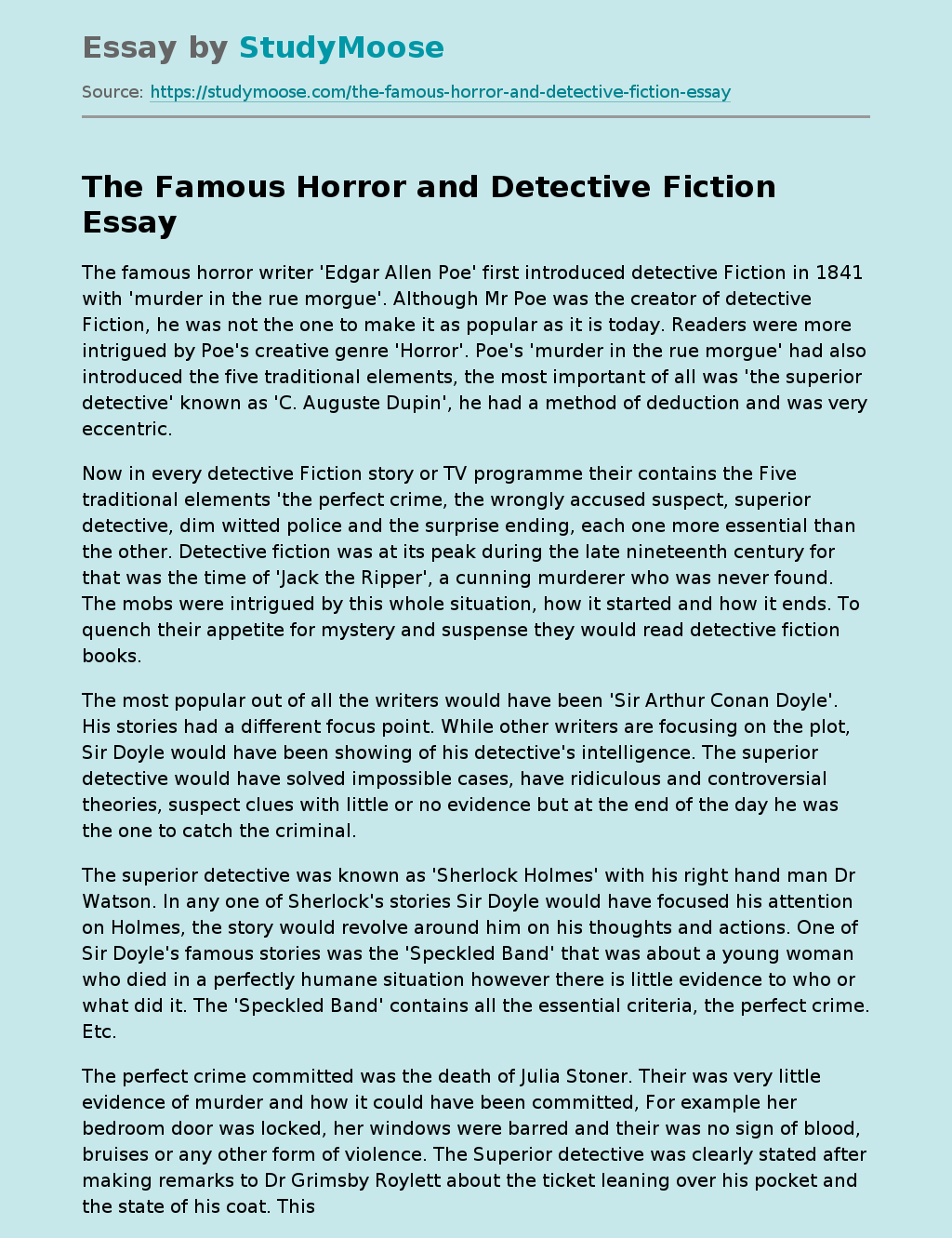