Lamb to the Slaughter

Because Dahl used vagueness in the book, he can control how much information we get from what the characters are thinking. For example, when Noonan: ‘turned and whispered something to the other detective,’ Dahl doesn’t tell us what was Noonan said. What made this more intriguing, was that another detective: ‘immediately ran outside into the street’. However, because we don’t actually know what was said, we don’t fully know what is happening at that time, meaning that we don’t know whether Noonan suspects Maloney for the murder she committed.

Don't use plagiarized sources. Get your custom essay on
“ Lamb to the Slaughter ”
Get custom paper
NEW! smart matching with writer

This in turn makes us wonder if there is something that is going on, that we don’t know about. However, in ‘The Speckled Band’, we always seem to know what is happening, because we read about everything that Holmes does. Also, no information is kept secret, like in ‘Lamb to the Slaughter’. This can be backed up by the last few pages in the book, as when Holmes is explaining how he deduced what happened from the clues he had, he also explains which clues were ‘red-herrings’ (for example, he says: ‘I instantly reconsidered my position when… an occupant of the room could not come either from the window or the door’)

It describes what Mary Maloney was doing, while waiting for her husband, Patrick, to come home.

What makes the introduction particularly unusual, is that Dahl uses descriptive words, but to describe inconsequential objects, such as: “On the sideboard behind her, two tall glasses, soda water, whiskey,” and “fresh ice cubes”.

This doesn’t make the introduction particularly compelling to read, and doesn’t leave us wanting to read on. Usually, an author would want to write an introduction that would grip the reader, which would be done by making an important, or mysterious event occur at the beginning, so that the reader would want to find out more about what would later happen. However, Dahl does put some very intriguing sentences into the introduction, which suggest that something will happen.

For example, Dahl writes: “There was a slow smiling air about her,” which makes it seem as if Mary wasn’t expecting anything to happen to her – but then a few lines later, Dahl writes: “… was curiously tranquil,” which suggests that something was going to soon happen. If readers pick up on these comments made by Dahl, then they would suspect that something was about to happen, which might make the reader want to know what will happen next. Although I criticise the introduction of ‘Lamb to the Slaughter’, the introduction of ‘The Speckled Band isn’t much better, I think.

This is because it talks about what Holmes has previously done – which is also not very gripping. However, the introduction of ‘The Speckled Band’ also has intriguing comments in it, more so than ‘Lamb to the Slaughter’. The most intriguing comment is: “which tend to make the matter even more terrible than the truth,” which suggests that, as well as the solution of the case being shocking, what will happen throughout the case will be just as bad.

This suggests that the rest of the book would be thrilling, and gripping, but the introduction was there, so that the events that would happen later could be outlined first. I can back this up, because Watson starts to tell us what happened in this case in the very next paragraph. In reflection, I will say that ‘The Speckled Band’ has the better introduction, simply because it seems as if it serves a purpose – with it leading up to later events. However, both introductions aren’t gripping, which means that readers don’t have an incentive to read on.

Lamb to the Slaughter. (2020, Jun 02). Retrieved from http://studymoose.com/lamb-to-the-slaughter-essay 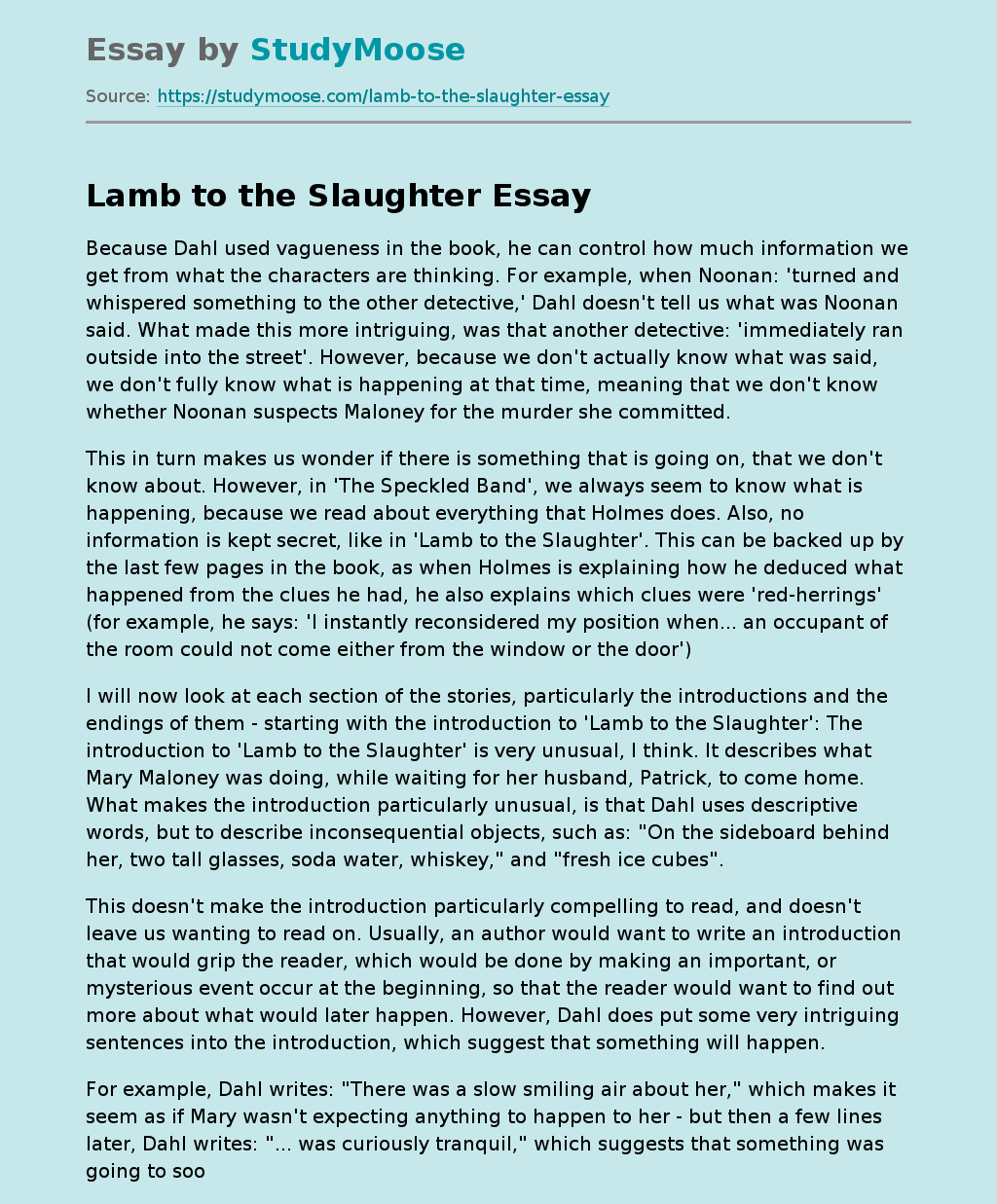