The first chapter will focus on the rise of detective fiction as a genre. And, how the works of Edgar Ellen Poe, Emile Gaboriau and Willie Collins served as a foundation and inspiration for the birth of Mr Holmes the consulting detective. Before this, it aims to give a short introduction to Sir Arthur Conan Doyle who penned the remarkable yet mythical being that is Mr Sherlock Holmes.

He grew up in a family where money was tight, yet a well-to-do uncle made sure that little Arthur got a proper education. In 1881, he could proudly call himself a doctor with a degree in medicine from Edinburgh University. He began his career as a writer when his patients were few and far between. His literary production was enormous and varied, he wrote everything from science fiction, poetry to factual material within history and spiritualism and the list goes on.

Yet to his own dismay it is the mythical figure of Mr S. Holmes he is most famous for. The universe surrounding the famed consulting detective has created the biggest cult following around the author and he continued being construed and reconstrued through every media known to man.

In an era, where thrillers have become more refined and are even considered an artform, it makes great sense to examine the men who laid the foundation for the most beloved detective in all of crime fiction. Many experts claim that Dr Joseph Bell was the biggest inspiration for creating Mr Holmes.

The young Mr Doyle is said to have been one of Dr Bell’s pupils while taking his degree at Edinburgh University. Dr Bell was quite an accomplished man, firstly he was a Senior professor at the Royal Collage of Surgeon to being Queen Victoria’s private surgeon, Now, Mr Doyle may have had his first encounters with this man at University but later on he actually ended up becoming one of Mr Bell’s employees. Dr Bell was were similar to Mr Holmes both in stature and appearance. On top of this, Mr Bell actually had an acquaintance who drew great parallels to Dr Watson mainly the fact that he was Veteran of the Crimean War (1854-56). But where one can surely argue that Mr Holmes and Mr Bell have their greatest strength are in their choice of method:

Endowed with a remarkable power to notice and deduce, Bel’s show-stopping trick was to diagnose a patient and provide details of his background without being given a word of history. He was reputedly able to discuss a sailor by a rolling gate, a traveler’s route by the tattoos he bore, and any number of occupations from a glimpse of a subject’s hands. (Smith 2009: 73)

The descriptions provided above of Dr. Bell do seem remarkable to the way Mr. Holmes goes about his case and stuns colleagues as well as his companion Dr. Watson along the way. Plus, much like Dr. Bell, Mr. Holmes pays attention to the smallest irregularity or simply puts detail and bases his conclusions of these.

Mr. Holmes may be one of the most famed detectives within crime fiction it. But one should not neglect the fact that crime stories have always intrigued readers. Some academics even argue that such stories can be traced back to the Holy book. Yet, the modern notion of thrillers emerged in small spurts since the 10th century.

During the same period that science was first being pressed into the service of crime-solving, the first detective stories, in which the analytical and rational deductive ability of a single, isolated individual provides the solution to an apparently inexplicable crime, were being published. (Scaggs 2005)

Sherlock may be the most famous detective in all of history, but he was not the first detective created. The first detective ever created is claimed to be Mr. Monsieur C. Aguste Dupin who is one of Edgar Allan Poe’s creations. Mr. Dupin was conceived in 1841 and take an analytical approach to his craft.

Now, one can see that Mr Doyle was not only inspired by Mr Poe but also a range of other crime fiction writers. On such writer was Wilkie Collins (1824-89) and his novel The Moonstone (1868) which clearly influenced Conan Doyle’s A Study in Scarlet. (Scaggs 2005) He goes on to point of that a specific part of Doyle’s The Sign of Four (1890) draws great parallels to the treasure theme and Indian sub-plot (Scaggs 2005) of Mr Collin’s The Moonstone. Another writer Mr Doyle sees as his guiding light is Mr Poe and how he presented his detective and companion. Attributes Mr Doyle took from Poe’s detective Dupin was his eccentricities, reclusive nature, his tendency to show off, and finally his approach to his work. The final creative mind who will be mentioned is Mr Emil? Gaboriau who is the mind behind the amateur detective Tabaret who can only be likened to Mr Holmes and Mr Dupin by way of intellect. One point where readers can draw a direct comparison between these powerhouses of crime fiction is their use of split narrators. Or as Mr Scaggs writes narratives in: in which long sections describing events that have led to the current crisis are embedded within a framing narrative of investigation and deduction in the present.(Scaggs 2005) The trick of split narratives are especially prevalent in Doyle’s A Study in Scarlet. 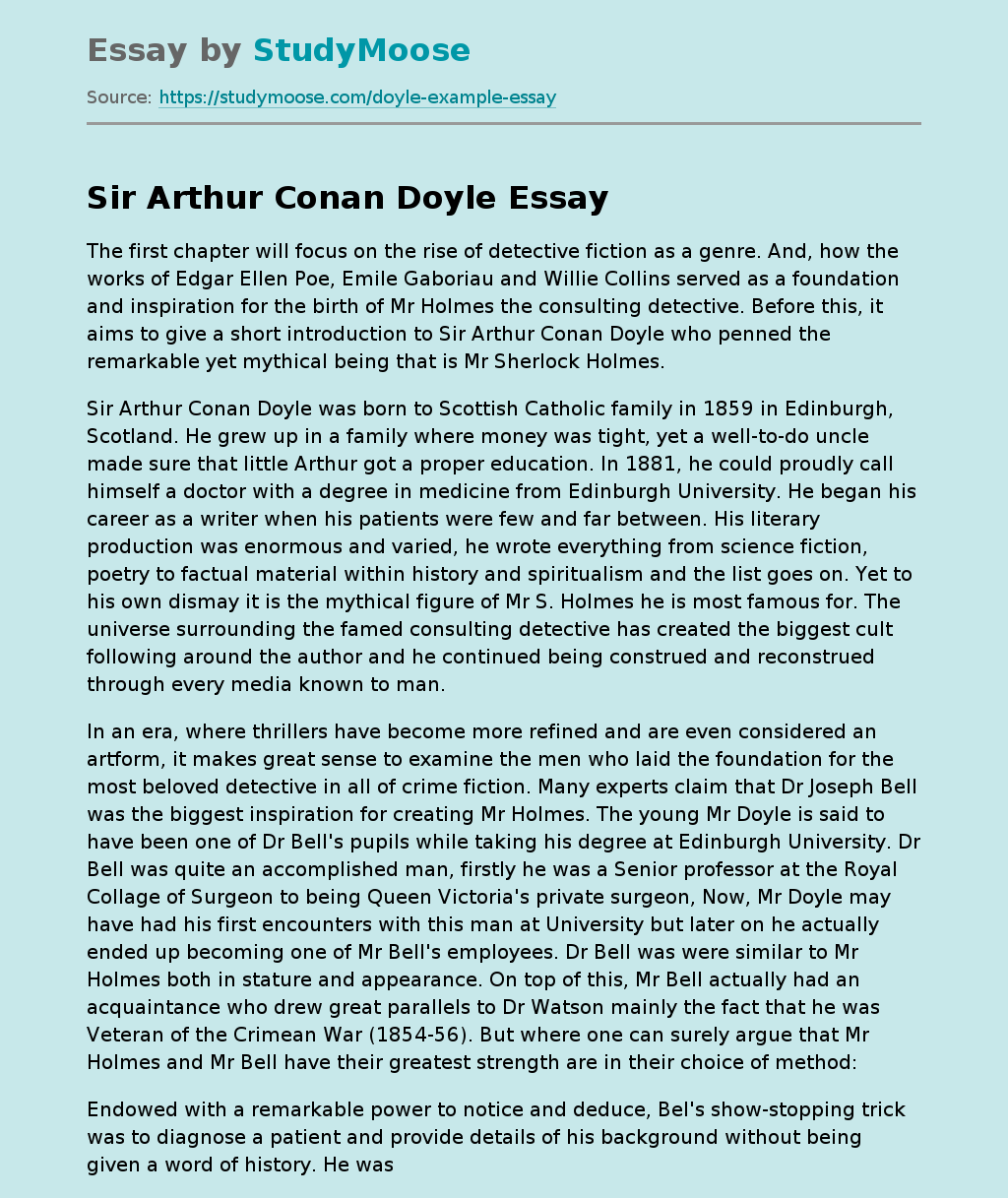