Research and discuss the family photograph album. How and why is the family album used to construct notions of identity?

Family photo albums have existed in many different forms. Not only as a personal flick book documentation containing “the chronicles of a family’s private story” (Fong, 2004, p.86) capturing special moments and events of the past; but the idea of documenting one’s past through images has been in existence since humans roamed the earth. Through pre-historic silhouettes of humans painted on cave walls; through the Renaissance where portraiture was available to those families who could afford it; to the point in history where cameras were available to the amateur mass public whereby photographs could be developed by any single individual.

Here moments could be captured at complete ease in great volumes and assembled into albums and passed down to generations. But why the desperation to capture our identities in these freeze-frame moments that were previously hours? What do these freeze-frames say about our families, our identities and ourselves? This paper will discuss these ideas and how a photo album is a selective and stylized documentation of our lives.

Theories of how the awareness of others viewing one’s “private story” could manipulate one’s personal identity through careful selection of chosen images displayed in the photo album. How the photo album generates nostalgia and longing that transports the viewer from an unpredictable future to a past that is stable. And finally how the overwhelming support of the Internet allows one’s photo album to be rendered digitally for many others to view questioning that the photo album is only a narrow vision of one’s life and therefore portraying an artificial lifestyle.

Many generations of families have used the photo album to document their lives and record proof of their existence. Despite our ever-changing life style we use photography to capture these moments and feelings to convey our sense of identity. West “Susan Sontag argues that all photographs aestheticize reality because the photographer selects what seems worthy of special and lingering attention to capture on film.” (West 2000, pg.2) These ‘freeze frames’ not only form and shape our history but also dictate what we appear to be. When we look at photographs we are not only looking into the pigments that fill this frame but also looking back into memories. Do we really remember the event, or is our memory altered because of the existing proof that is the medium of photography?

Typically in everyday life instantly we make snap judgments of individuals; from where they come from, to the style of hair they have. Nonetheless the portraits of these strangers do not provide us with an accurate description of their identities. Sometimes we imagine what we would look like to others, and thus a constructed identity is created for the sole purpose of perception to these people.

Larry Sultan (1985) states “Photography is there to construct the idea of us as a great family and we go on vacations and take these pictures and then we look at them later and we say, ‘Isn’t this a great family?” (Sultan, 1985) If this argument proves correct then the photographs and frames that are glued into our beloved family album should provide us with questions such as- Were we really happy in that moment in time?

Larry Sultan is an American photographer and produced a series of ‘Home made’ pictures of his mother and father in everyday life around their home. Larry challenged himself by visualizing and creating traditional photographs of his parents as an attempt to create a sense of identity to a traditional family photo album. Therefore he (Sultan, L. 1992, pg. 109) provided his mother and father with roles and “stage directions” of action and posture, all of which to his desire. Larry Sultan (1992) argues the control of the image by asking -“A question of how you look and who determines that, who’s in control of the image?” (Sultan 1992, pg.113).

In “Mom Posing for me” Sultan’s figure does not appear in that scene of the frame, dictating that he in fact is the one in control. Whereas in most traditional family albums the main focus revolves around the children and the capturing of extraordinary moments of spontaneity which are then displayed as a memento of history. Sultan however is staging the photography of his parents. The photographer has an opportunity to create scenes on his terms and portray to the viewer his perception of his parent’s identity; consequently the accuracy of their identity has been faltered.

In this traditional ‘freeze frame’ as viewers the first feature we notice is a timid, elderly woman propped against the wall, displayed as if a possession such as an object or an ornament. Even though Sultans father has his back turned to the lens (hiding his identity) we feel the sense of dominance, is he simply more interested in the television? Within this particular captured frame we could say that Sultan’s father is arrogant and unwilling because he does not stand by who we presume is his wife.

On the other hand as the viewer, do we see the woman standing alone to state her independence? Was this Sultan’s intention for the photograph? In 1980 America, women made significant accomplishments in economic and political domains for the opportunity to become appreciated as equals to men. If this is so, we are able to see this image as a symbolic representation of social collective behavior from Sultan’s mother when we form personalities of the two people.

Looking back into the history of our lives through the family photo album we relate the relationship between the frame and our life. Does it remind us of a loss in the family or remind us of whom we once were? We look at the images and construct a sense of belonging and happiness, but will the image alter the original memory that we had once created. Sultan (1985) stated that “… photography is instrumental in creating family not only as a memento, a souvenir, but also a kind of mythology.” (Sultan)

Nostalgia is a sentimental longing for the past, so when we look at these photographs do we find a connection or disconnection from what we remember? Photographer Susan Sontag states “Instead of just recording reality, photographs have become the norm for the way things appear to us, thereby changing the very idea of reality and of realism.” (Sontag 1973: 87, pg.107).

She argues that even though the image is fixed and factual, our visions and memories are detached from one another. People present in the photograph can often have different versions of that memory in comparison to one another. If memories can be altered on reflection of the photo album, then identities can be too. Comparison allows us to view our families and compare their identities to ours.

The photo album is built upon the basis of memories and identities, not just our own, but we can adopt other people’s by flicking through this book of generations and seem to recall who is who and create our own identity through the notion of photography. Nancy MarthaWest (2000) “If nostalgia does misrepresent the past by imagining it more stable than it was, it also makes the present bearable, usable and even triumphant” (West 2000, pg.11)

We make stories from these freeze frames which may not necessarily be true but what we want to believe, building a sense of stability through the photograph we are looking at. Like any book a narrator is needed, this is where we take position, creating, destructing and editing photographs to construct identities that we aspire to be or making a stylized reality that we would want. Nancy Martha West (2000) “It allows for a continuity that can ‘replenish ones sense of self’ even in the face of terror and loss.” (West 2000, pg.11) Nostalgia derived from the photo album allows us to feel safe, give us our identities and lets the unpredictable future seem manageable.

In modern society we have access to Internet Social Networking sites such as Facebook, Twitter or Instagram. The development from the traditional family photo album where we carefully place these frames into a leather bound book has blossomed onto the World Wide Web where millions of people can gain access to our personal lives and our identities. Creating a false identity through a traditional photo album is now possible to view on an accessible mass scale meaning that the constructed identity seems more successful. This is because many people view and believe what they perceive and thus desire what they think this person has, or who they think this person is. Do we change our identity on these sites to become who we yearn to be in the real world?

The contrast of the virtual and physical world has vast differences but what they have in common is that judgments are still made of one another through our daily lives. We comment on clothing, ethnicity, occupation, the use of our body language etc. The internet on the other hand gives us opportunity to take order of our lives, to control comments, demand listeners and readers, write statuses, post pictures, and subsequently create an identity of how we want to be represented through these modernized photo albums. (Hamburger, E. (2012) Facebook revamps privacy settings and Activity Log, now lets you untag photos en masse [Online] Available: http://www.theverge.com/2012/12/12/3758410/facebook-revamps-privacy-settings-and-activity-log [22 December 2012])

It is apparent to see on these virtual web spaces that many people are concerned to how they represent themselves through privacy settings – sifting through the ‘bad’ pictures of themselves and allowing other pictures to be shown through their profile page. Margaret Cooper (2010) “The most common reason for females to untag a photo was displeasure with their appearance in the photo (88.88% of females who untagged photos), indicating how they looked was an important part of their self-presentation to others.” (Cooper 2010, pg.103) This is parallel to how we select which pictures are to be displayed in the traditional photo album; therefore the photo album is stylized artificiality in relation to our identity.

It seems that the need to capture our identities not only serves the purpose to store memories of the family’s heritage but has become an album to convey a stylized reality of our identities. Nostalgia and the need to reflect on images allows us to feel safe within these identities. The development of technology has broken the seal of the traditional way of portraying the family photo album. The fact that we are now able to view others’ ‘private story’ over the internet and how we manipulate and select individual photographs of each other indicates a new generation for the family photo album.

There is now a ‘building block’ and opportunity to create our own identities and memories through this cultural condition. However it is still a reoccurring debate whether or not we lose our sense of identity through manipulating and editing the photos we chose to show to the world via the internet or within the family photo album. Nevertheless this tradition exists to this very day and has been in existence for decades through the form of photography. It deniably allows our private lives of our photo album to be rendered for many others to view questioning the perception of an artificial lifestyle where the photo album is only a narrow vision of one’s life. 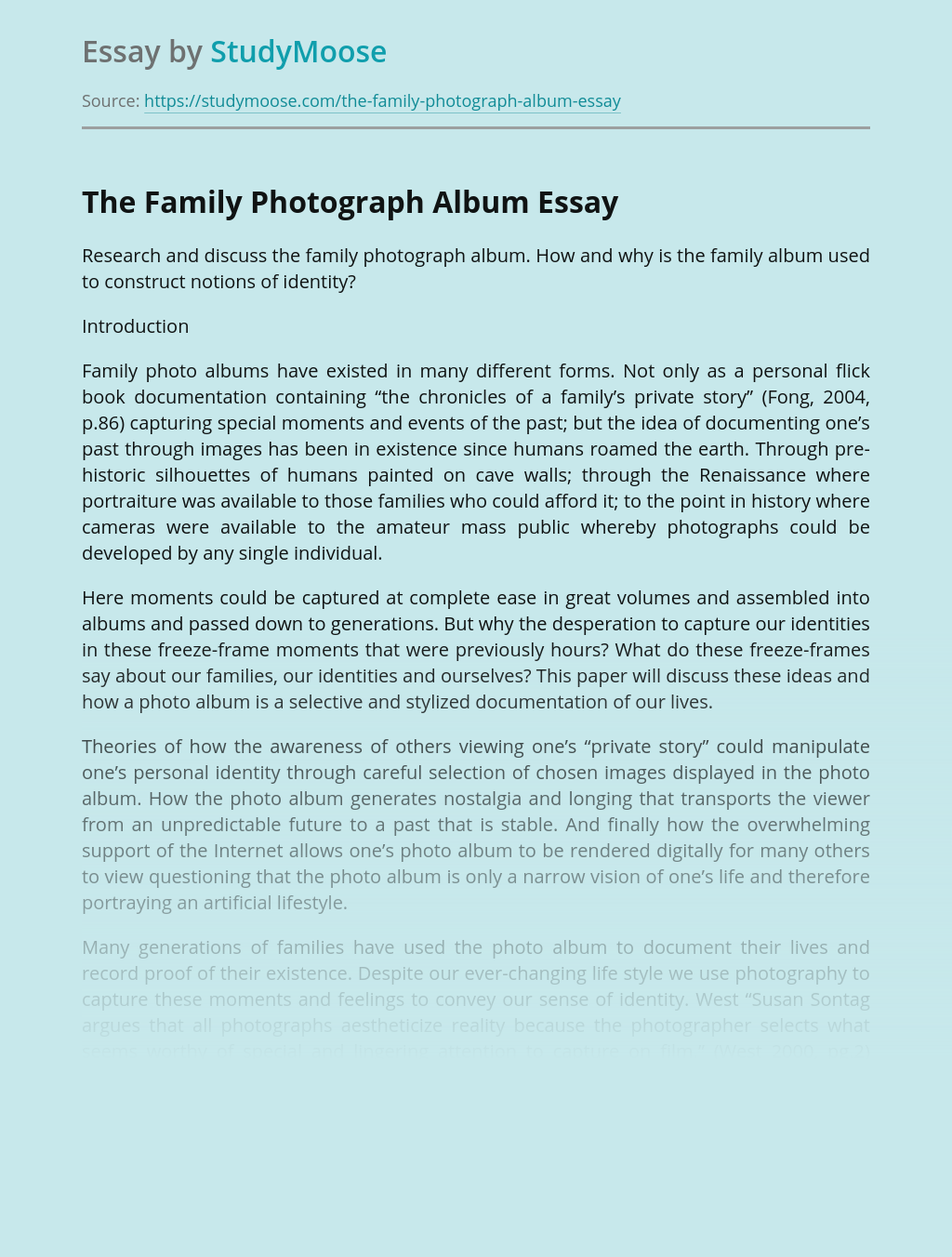 Don’t waste time
Get a verified writer to help you with The Family Photograph Album
Hire verified writer
$35.80 for a 2-page paper
Stay Safe, Stay Original