I have chosen to look at the genres R&B and Rock. R&B CD covers usually have the artist on the front cover showing off their body and quite a plain background. Rock album covers never show the artist’s photo and often and a picture symbolising what they believe in. This is because they both have different star values. A typical mise-en-scene from R&B would be the artist and one from rock would be a large bold title.

Don't use plagiarized sources. Get your custom essay on
“ Compare and Contrast the CD Covers of ‘Dangerously in Love’ by Beyonce and ‘Liberation Transmission’ by Lostprophets ”
Get custom paper
NEW! smart matching with writer

Beyoncï¿½’s album name, ‘Dangerously in Love’ was named that because at the time she was recording the album, she fell in love with the artist who featured in one of her songs. Lostprophets’ name is linked with their album name and cover. The album name is ‘Liberation Transmission’, so they are sending messages about freedom and the last part of the name is prophets. One of their tracks is ‘The New Transmission’ which means they are sending their message out which is what rock groups do and it also links with the album name.

‘Rooftops’ is another song title from the album, and connotes that their ‘message’ is sent from their. It is a high up place and a powerful place to be. The first song on ‘Dangerously in Love’ is ‘Crazy in Love’. The two names are the same apart from the first words-‘Dangerously’ and ‘Crazy’, but these words can be linked. If something is very crazy it can be dangerous.

The mise-en-scene is fairly simple on Beyoncï¿½’s album.

She is in the middle but leaning to the left and wearing a sparkly net top. You can just see the top of her jeans which show all of her stomach. Her hair is blowing backwards which makes her look more natural and relating to the audience. It also shows her earrings which match her top. However, the back ground is just blue that fades towards near the top and it’s not very interesting so she is the thing that the attention is drawn to. The album title is in the bottom right hand corner of the album and her name above it in larger letters. The lighting looks as if it is shining straight towards her and lights up her face and body.

On ‘Liberation Transmission’ the background is very plain, like the R&B album because the designers of the cover wanted to draw the audience’s attention to the main picture. However, unlike the R&B album cover the main picture isn’t a person. It is a crest that has been drawn by a computer or a person. Crests are things that have a history behind them and represent something like a family or a school. This crest represents their transmission of liberation. There is also blood splattered over the front of it with connotes that it is a message worth fighting for and a controversial one.

On Beyoncï¿½’s album, the background is blue which is just to make Beyoncï¿½ stand out, but she is wearing jewellery that is silver which connotes wealth. The Lostprophets album is black and white which is very clear and bold. It connotes they are not afraid to say what they believe in. The blood splattered across it is red and this symbolises death and danger. The font used on Beyoncï¿½’s album is a very modern font and shines in a silvery white colour. This connotes she is modern and fashionable and it looks cool so it will appeal to people. On ‘Liberation Transmission’, the font is huge bold and black. It stands out and makes itself clear. It is very square and this looks more rigid and strong, connoting they won’t be knocked back easily.

Beyoncï¿½’s album appeals to her target audience because they want to be like her and what she looks like on the cover. By buying the album, it is like having a little piece of this for themselves, so she shows her body and wealth on the front. Lostprophets’ audience like the music for what it is and don’t care about the image of the artists, so it’s not on there. They like what they stand for, so Lostprophets make it clear on the cover.

Compare and Contrast the CD Covers of 'Dangerously in Love' by Beyonce and 'Liberation Transmission' by Lostprophets. (2020, Jun 01). Retrieved from https://studymoose.com/compare-contrast-cd-covers-dangerously-love-beyonce-liberation-transmission-lostprophets-new-essay 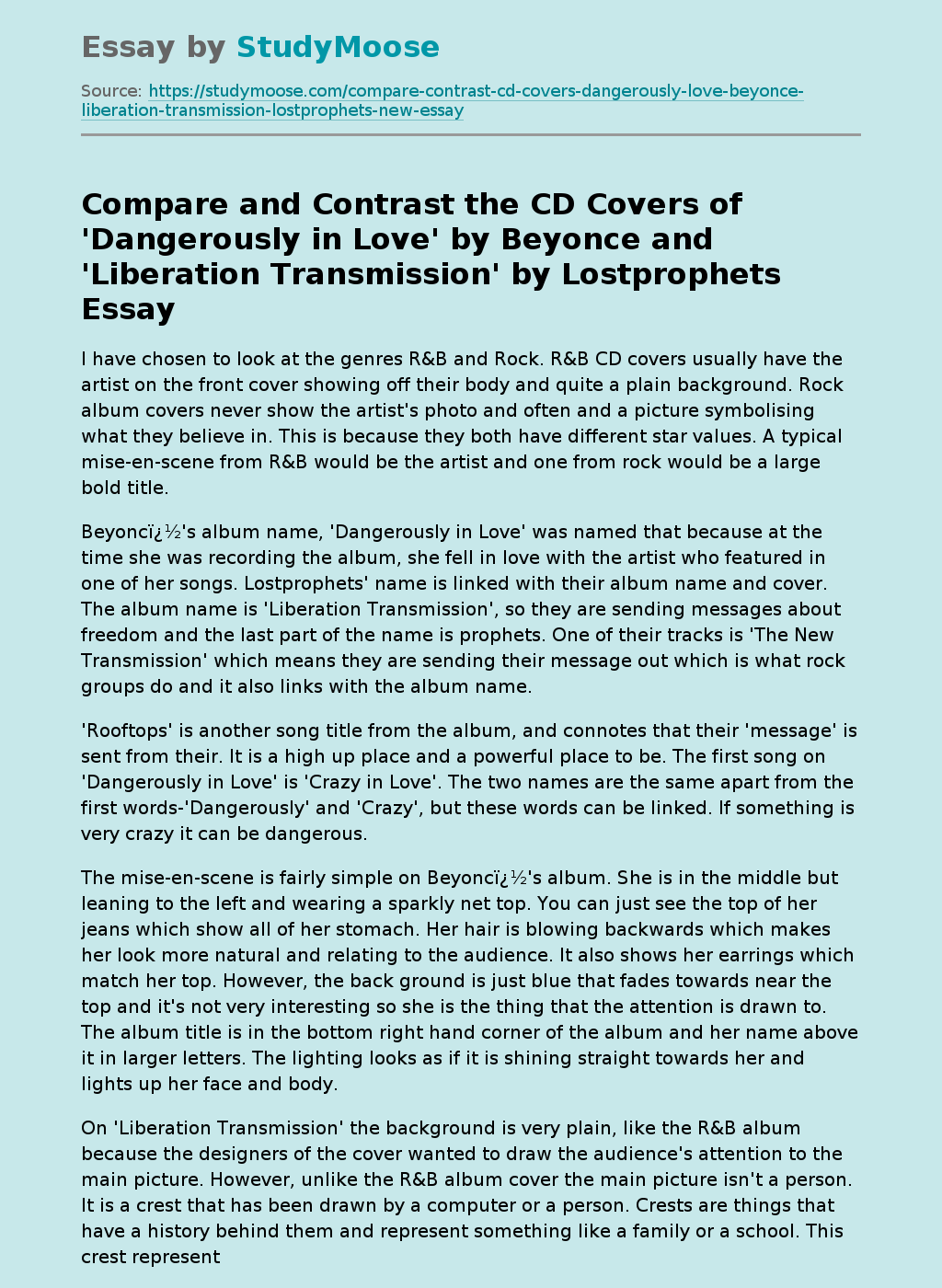