The autobiography covers on the life of Valentino

A number of authors of work of literature have mastered the art of narrating stories in ways that give the whole perspective of real life experiences in various societies that they choose to depict in their works of literature. Such is the work by Dave Eggers in “What Is the What: The Autobiography of Valentino Achak Deng”. This is an autobiography of Valentino Achak Deng, a Sudanese refugee whose life story appears to be more fiction than true. The autobiography covers on the life of Valentino in various parts of the world.

Don't use plagiarized sources. Get your custom essay on
“ The autobiography covers on the life of Valentino ”
Get custom paper
NEW! smart matching with writer

Life for Valentino commences in his native Sudan where life is all perfect and until a war breaks out that forces him to flee to neighboring Ethiopia. He is forced to flee again to Kenya and ultimately finds refuge in the United States of America.

The narration gives vivid descriptions of the places Valentino spent his time, as well as the experiences that he endured in those places. The US for Valentino appears to be a place of final refuge, a place free from all the misfortunes witnessed in Africa; whether in Sudan, Ethiopia or Kenya.

However, he soon comes to find out the US is different but also Africa quite similar in certain aspects. Valentino’s struggle in the US are both different and similar to his struggles in Africa.

Valentino is concerned about the stereotypes that exist in the US about Africa; this is a negative aspect of the US that he did not expect upon his arrival to this new world that would free him from all the struggles he had to go through in Africa.

He comes face to face with the American stereotypical depiction of Africa and Africans at large when he buys for himself an international phone card to call back home in Africa. He goes on to narrate; “The one I have is very strange, and was probably not made by Africans: its bears an unusual montage: a Maori tribesman in full regalia, spear in hand, with an American buffalo in the background. Over the images are the words: AFRICA CALIFORNIA”. (Eggers, 470).

The fact that Africa was depicted as a place that belonged to tribesmen outlines the primitive way in which Africa and Africans were regarded in the US. To make matters worse, the Maoris are people of the New Zealand who have nothing to do with Africa or their culture. This goes to prove that the US has a cliched perception of Africa and will portray this even with inaccurate representations. It did not matter to the people who made the cards that the Maoris were not Africans; outlining an inherent homogeneous concept of Africa as a home of tribesmen. This is a fact that Valentino finds quite disturbing.

There is sense of security that engulfed Valentino when he came to the US. He thought this was not going to be anything closer to what he had experienced in Africa, where he dodging violence and all sorts of misfortune appeared to be normal. Muggers break into Valentino’s apartment and apart from beating him up and stealing from him, they also remind him of how stereotypical the American society was towards Africa and Africans. They call him “Fucking Nigerian! So stupid” (Eggers, 9). This reminds Valentino that as much as he thought the US was paradise and such a nice place, insecurity was a real problem.

Further, it did not matter where one was coming from. An African was regarded as an African; whether he was from Sudan or Nigeria; An African will always remain an African. This a form of stereotype that Valentino finds to be more disturbing than the fact that he was mugged in the US in his own apartment. Further, the muggers found it pleasurable seeing a Nigerian ad the quote suggests; “Hey Tonya, come out here and look at the Nigerian prince” (Eggers, 15). This outlines that he was construed so differently in this American society, his appearance and as well as race was something that other people found amusing, and this was disturbing to Valentino.

Valentino had grown up in refugee camps in Ethiopia and Kenya, and the US was like a form of salvation to him. However, there is a form of perception about refugee camps that he finds in the US that greatly disturbs him. Quoting from the book; “When images of the earthquakes in Pakistan are shown, and the survivors seen in their vast cities of shale-colored tents, waiting for food or rescue before the coming of winter, most Westerners believe that these refugees will soon be returned to their homes” (Eggers, 370). From this quote, it is evident that people in the US got the whole perception of refugees wrong. Valentino had himself been displaced by violence and found himself in a refugee camp. However, his stay was not short; he grew up in a refugee camp. He states that growing up, his life was lived in refugee camps (Eggers, 370). This outlines how Valentino perceived America and Americans to be out of touch with the problems and realities of the world, preferring to uphold the various perceptions and stereotypes they had on Africa and Africans.

The United States didn’t seem like a place Valentino would find the form of discrimination he experienced. To begin with, he had to find work and when he did, it was apparent that he was different from others. There are different rules for employment for people like him in the United State; which are not so nice. “At my fabric-filing job, my coworker seemed to operate under vastly different rules than I. She arrived late each day and lied about her hours” (Eggers, 234). The co-worker was of the minority race and the differential treatment accorded to them was evident. This Valentino attributes to the fact that he was black and could not get away with a number of things at work, sometimes working longer hours to lesser pay than his co-worker who earned more for less hours of work. Valentino further reports that, “I had no recourse but to work twice as hard as she, for two-thirds her pay” (Eggers, 234). This implies that the level of discrimination in the United States did not permit him to earn the amount he deserved. He was viewed as a person of a lesser race as well as societal standing and thus deserved to be paid less than colleagues even though he put in more work.

Discrimination in the US is further evidenced through Valentino’s interaction with Madelena in his pursuit to join a Jesuit college. In as much as he was qualified and it was evident that Madelena would enroll him, a number of issues came up. Among the reasons that made his application stayed include as Valentino reports; “I had failed to make a certain test that earlier they told me was unnecessary” (Eggers, 471). These are antics that can be seen to deny a deserving person an opportunity. Joining the Jesuit College was made difficult because of the type of discrimination people like Madelena had against Valentino in a world that was supposed to be free from such like vices.

To conclude, Valentino’s story relates to various aspects of everyday living. There are things or places that appear to be the ultimate solution to problems or challenges. However, getting to experience the things and places envisaged comes with challenges. Valentino thought he had escaped war and the destitution of growing up in refugee camps. However, his experience in the US also taught him that a place free like the US was also associated with vices such as violence, stereotypical depiction and discrimination.

The autobiography covers on the life of Valentino. (2019, Nov 15). Retrieved from https://studymoose.com/a-number-of-authors-of-work-of-literature-have-mastered-the-art-example-essay 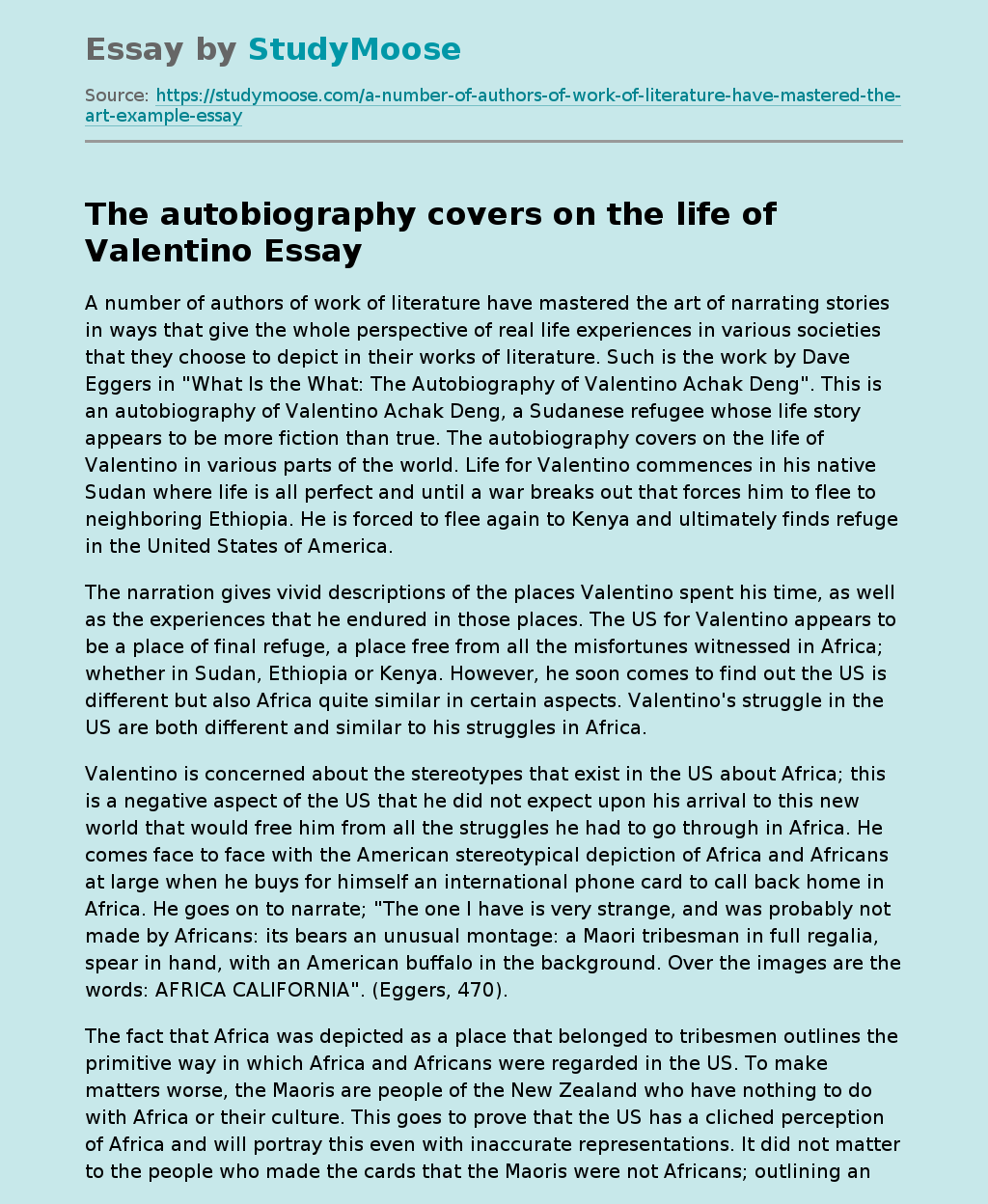