The Evolution of American Federalism

I am going to examine the nature of American Federalism and how this division of power between the Federal and state governments impacted the Civil Rights Movement. As I do so, I will also address three assigned concepts in conjunction with an assigned question. I would like to choose to talk about Plessy v. Ferguson (1896) and Brown v. Board of Education of Topeka, Kansas (1954), the second one would be about the Civil Rights Act of 1964 and the Voting Right Act of 1965.

Don't use plagiarized sources. Get your custom essay on
“ The Evolution of American Federalism ”
Get custom paper
NEW! smart matching with writer

I chose the Affirmative Action to be my last one. In my writing project, I will give definitions first to each concept and explanations would come second. At last, I will sum up the main ideas that appeared in my writing paper and give conclusions.

With the implementation of the federal system in the United States, the separation of powers between the federal government and the state government has a great impact on the Civil Rights Movement. If we don’t talk about the civil rights movement, in general, state laws should be based on the constitution.

If state laws are opposed, but not unconstitutional at the same time, state laws are generally allowed to continue to be used. So in a sense, the separation of powers between the state government and the federal government is actually unilateral supervision, but also a two-way understanding and inspection. But most importantly, in the face of major decisions, the state government is a filter, and the key adjudication rights are handed to the federal government.

I think it is because of such a system that the civil rights movement can succeed faster and spread this success to the whole country more quickly. And this is when the first topic I want to talk about gets involved.

Plessy v. Ferguson (1896) is actually a landmark case in American history. The ruling on this case marks the establishment of the principle of “separate but equal”. The reason for this began on June 7, 1892, when Homer A. Plessy, who is one-eighth black, deliberately boarded a bus dedicated to white people on the East Louisiana Road. At that time in Louisiana, white people and other races must ride in equal but separated carriages. According to the law, Plessy was identified as a black person and was arrested and detained for his actions in violation of the law. He took the Louisiana State Government to court, accusing it of violating his rights under the 13th and 14th amendments to the U.S. Constitution. But at that time, judge John Howard Ferguson ruled that the state had the right to enforce the law within the state, and obviously, Plessy lost the court case. To make matters worse, he had to pay $300 for violating the quarantine law. But that’s not the end, he didn’t give up. Plessy then sued judge Ferguson’s ruling in the Louisiana Supreme Court, which upheld Ferguson’s judgment. So again, his efforts did not pay off.

In 1896, Plessy appealed the case to the Supreme Court of the United States. On May 18, the Supreme Court ruled by a 7-to-1 majority that Louisiana law did not violate the 13th and 14th amendments to the constitution. The reason given is that “segregated but equal” does not mean discrimination against black people, but only the recognition of differences between white people and black people due to different skin colors. They held that the plaintiff’s plea was based on inferiority. In fact, the ruling of the case confirmed and affirmed the legitimacy of the apartheid policy, which made the apartheid law of “separate but equal” in the southern states of the United States continue for more than half a century.

Although the case did not appeal successfully, Plessy’s spirit greatly stimulated many black people who were still suffering as well as the people of other races. This is also a rudimentary case of the Civil Rights Movement. It was not until 1954 that Brown v. Board of education lost its legal status.

Brown v. Board of Education is a landmark case of the Supreme Court in 1954, in which the judge unanimously ruled that the segregation of children in public schools is unconstitutional. Brown v. Board of Education was one of the cornerstones of the civil rights movement and helped set a precedent that “separate but equal” education and other services were in fact fundamentally unequal.

The case is made up of four cases, the most famous of which is that the plaintiff Oliver Brown filed a class-action lawsuit with the Topeka Education Commission of Kansas in 1951. The reason was that his daughter, Linda Brown, had previously been denied admission to the all-white primary school in Topeka. Brown claimed in the lawsuit that black children’s schools were not equal to white schools, and that apartheid violated the so-called “equal protection clause” of the 14th Amendment, which holds that no state can “deny to any person within its jurisdiction the equal protection of the laws.” There are also many factors that play a role in the success of this case. What impressed me most was that the chief justice of the Supreme Court who dealt with Plessy case died after Plessy’s case. Before Brown v. Board of education case, Earl Warren was appointed chief justice of the Supreme Court.

The core of these two cases is trying to overthrow a law of separate but equal. Although there are not many doubts from the logical aspect. But if it is true that all people are equal, then why separate them? Plessy’s case actually increased the sense of resistance for the later Civil Rights Movement but because it did not succeed in the end, part of the confidence was lost. But the success of Brown v. Board of Education is a cornerstone of the Civil Rights Movement. It sets an example for those who work hard later and made them more confident by showing that their fight could be successful one day. In fact, the decentralization of state government and federal government in the American federal system has helped the success rate of the Civil Rights Movement. After all, although the state government has “strict discipline” for its own people, the way they advocate discipline is also based on the decisions of the federal government. From these two cases, it can be concluded that after the failure of the lawsuit to the state government, there is still hope that the decision of the federal government is what that really matters.

The Civil Rights Act of 1964 is a landmark federal legislation. It expressly prohibits discrimination on the basis of race, color, religion, gender, and nationality. The law was enacted on July 2, 1964, and signed by President Lyndon B. Johnson. The enactment of this Law marks one part of the success of the Civil Rights Movement. The United States is a country famous for freedom and equality. The promulgation of the bill is mainly because people believe that although “separate but equal” is established, there are various signs that people’s attitudes towards black people and other ethnic groups in society are not as equal as the ideal. This violates the provision of the constitution that everyone can enjoy equal protection of the law. Although there were written laws indicating equality in the form of vague concepts before the promulgation of the Civil Rights Act, the civil rights act of 1964 completely lifted the veil of ambiguity and emphasized equality for all. The promulgation of this law is still of great significance. It gives everyone equal opportunities to work, go to school and enjoy public places, it made everybody officially equal to each other based on the law.

The Voting Rights Act of 1965 was signed by the same president to overcome legal barriers at the state and local levels. These obstacles have prevented African Americans from exercising the voting rights guaranteed by the 15th amendment of the US Constitution. The voting rights act of 1965 is regarded as one of the most influential civil rights legislation in American history. After the enactment of this law, people finally have the opportunity to enjoy the right to vote equally.

Affirmative Action is a social movement that emerged in the 1960s with the African American people’s rights movement. The purpose of this campaign is to bring back the discrimination against black people and women in history, and to convert their suffering in history into real benefits. This also involves a series of social movements. It advocates taking care of vulnerable groups such as ethnic minorities and women under the conditions of university enrollment and government bidding. It is a “race priority” law in a specific period, hoping to ensure that they will not be discriminated against and treated unfairly in terms of re-education and work. In the end, influenced by California, another ten states began to support the “affirmative action” to eliminate reverse discrimination.

The Evolution of American Federalism. (2020, Oct 01). Retrieved from https://studymoose.com/the-evolution-of-american-federalism-essay 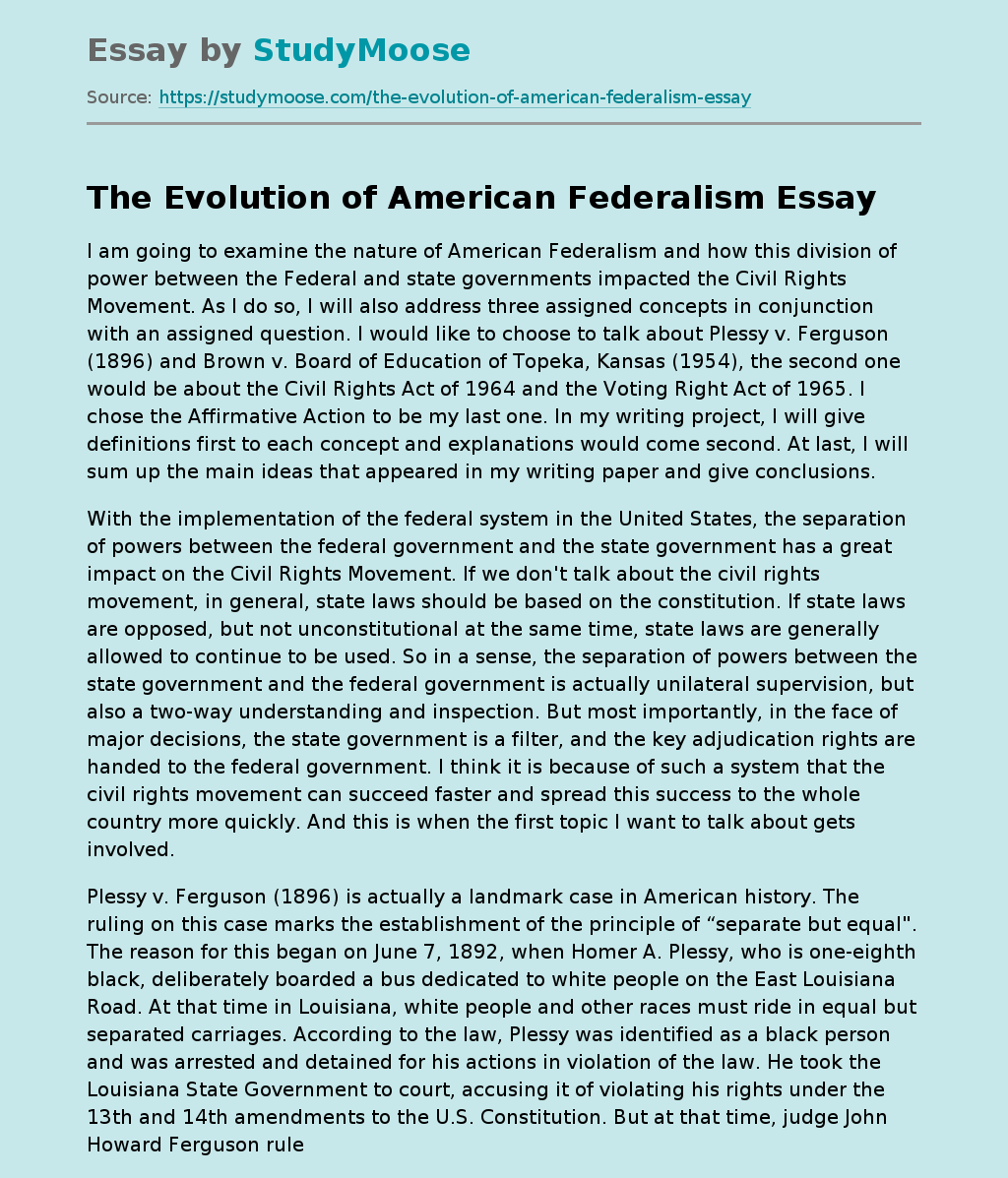