The Effects of Working Mothers

As more mothers are becoming employed, the concern of whether a mothers employment has a positive or negative effect on children and family is being questioned. This research paper reviews the effects of mothers’ employment on a child’s behaviour, education and the relationships within the family. It concludes that a mothers employment is indeed a positive aspect to families dynamic. Through research children with working mothers prove to be more smarter, and well behaved than children with mothers who are not employed.

Don't use plagiarized sources. Get your custom essay on
“ The Effects of Working Mothers ”
Get custom paper
NEW! smart matching with writer

This research paper also shows that the relationships within the families are enhanced positively through a mothers employment.

As times change, families do as well. In the past 50 years Canada has seen significant changes in the family structure. The notion of motherhood as the sacred and primary role of women is no longer the norm, or ideal. The lifestyle of mothers and families today have completely changed (Hoffman, 1998). “Family sizes are smaller, modern technology has considerably diminished the amount of necessary housework and food preparation, women are more educated, marriages are less stable, life expectancy has increased and youthfulness has been extended, expectations for personal fulfilment has been expanded and traditional gender role attitudes have been modified and are less wildly held” (Hoffman, 1998) shaping the entirely of women’s roles, as well as families.

In todays time, mothers no longer hold full responsibility of the household chores, and the upbringing of the children. Instead the majority of mothers are employed and are a contributing asset to the families financials.

This major change has raised the question: How does a mother working affect the children and family? Although widely viewed as a negative aspect to a family’s dynamic, working mothers prove to have a positive effect on a child’s education, behaviour, and relationships within the family.

The effects on a child’s education

Working mothers have been proved to be beneficial for a child’s cognitive development after the first year of a child’s life (Sailor, 2012). A study showed when mothers worked during the earlier years of a child’s life, there were negative effects on a child’s thinking and behaviour due to the child not developing a proper attachment to their mother during the developmental stage of attachment (Sailor, 2012). If a mother is present during the first year of life, studies show a mothers job doesn’t have negative effects on her child (Sailor, 2012). Children with employed mothers are found to have higher cognitive scores (Sailor, 2012) and receive higher test score than children with nonworking mothers on language, reading and math (Hoffman, 1998). Studies also find that boys and girls are affected differently by a mothers employment. Girls are shown to be less affected by a mothers employment.

They appear to have more beneficial results through a mothers employment and to the alternate child care (Sailor, 2012). Studies also find that daughters of working mothers have an overall better achievement in academics, their career and commitment to their work (Hoffman, 1998). Boys on the other hand did better if the mothers care was replaced by a grandmother or close relative (Sailor, 2012). A mothers employment can also dictate what type of school the child goes to. Children with both parents working may have a financial advantage. Having more than one income in the household may allow the child to go to better school than children whose parents only have one source of income (Mann, 2012) Also when a mother is working, they usually send their kids to daycare. This insinuation is beneficial to a child because it builds socialization skills (Mann, 2012) Therefore a mothers employment through research proves to be a positive influence on a child’s education. Children with working mothers have both a cognitive, social and financial advantage when it comes to their education.

The effects on a child’s behaviour

A mothers employment is shown to have gender-based effects on a child’s behaviour. The behaviour of girls is effected more positively than the behaviour of boys. A study found that daughters of employed mothers were more stable in a classroom setting than daughters of unemployed mothers, whereas boys of employed mothers showed more acting out than boys whose mothers did not work (Hoffman, 1998). The study also found that daughters of employed mothers also were more independent, social, effective workers, and had a higher capability to adjust to social matters than girls with unemployed mothers (Hoffman, 1998). Another study showed that children with parents who are either both unemployed, or one of them is unemployed, show more challenging behaviours at the age of five, than a child whose parents are both employed (McMunn, 2011). More specifically, this study showed that boys whose mother were the wage earner in the family presented more behaviour difficulties than boys living in a dual income household.

Girls, on the other hand, displayed more behavioural difficulties than girls in a dual income household if the father was the wage earner (McMunn, 2011). Although the direct influences of each gender are highly important, the most important influence a mother has on her child’s behaviour, regardless of the gender, is shown to be the example she sets for her child. Through a mothers employment children are able to learn work ethic. A mothers employment is highly beneficial to a child because it allows them to look up to a mother who is a productive member of society, and strive to be the same (Mann, 2012)

Therefore through a mothers employment, the behaviour of children is influenced positively. Generally children in the classroom with employed mothers are better behaved than children with unemployed mothers. Children of employed mothers have a modern role model to follow. This influence allows them to strive to become productive members of society and diminishes some of the attitudes towards traditional gender roles (Hoffman, 1998).

The effects on family relationships

The status of a mothers working position, whether full-time or part-time, does not affect the importance she places on being there for her family and supporting their needs. Instead a mothers employment builds stronger relationships within the family. The relationship with the child and the mother is enhanced through a mothers employment. Because the mothers employment benefits the family by supporting the families needs (Reynolds, Callender, & Edwards, 2003, p.63-67), the child is granted the needs they need to flourish physically and mentally. A mother’s employment allows a child to view his mother as a role mole model improving the relationship between the mother and child (Reynolds, Callender, & Edwards, 2003, p.63-67). A study found that father with working partners express that the time their spouse shared with the children was not taken for granted.

In conclusion, both working and non working mothers place high value on their families. In both cases, mothers try to do what is best for their families. Although being at home and taking care of the children had been the norm for many years, working mothers prove to be a more positive asset to a families dynamic in todays society (Mann, 2012) Studies suggest that their are cognitive, social, behavioural and financial advantages children receive when their mother is working. Children with working mothers had higher test scores, were more socially experienced, behaved better and had a better chance at receiving better education because of the extra income the family would receive from a mothers employment.

The relationships within the family were also proven to be positively influenced by a mothers employment. Working mothers are said to focus more on the quality time with their children and family rather than the quantity improving the quality of relationships. Children also are able to look up to their mother building a relationship through admiration, and appreciation. Therefore in general, the effects of a mothers employment prove to be more positive then negative. A child’s education, behaviour, and the relationships within the family are all areas that are positively affected by maternal employment.

The Effects of Working Mothers. (2016, Aug 07). Retrieved from https://studymoose.com/the-effects-of-working-mothers-essay 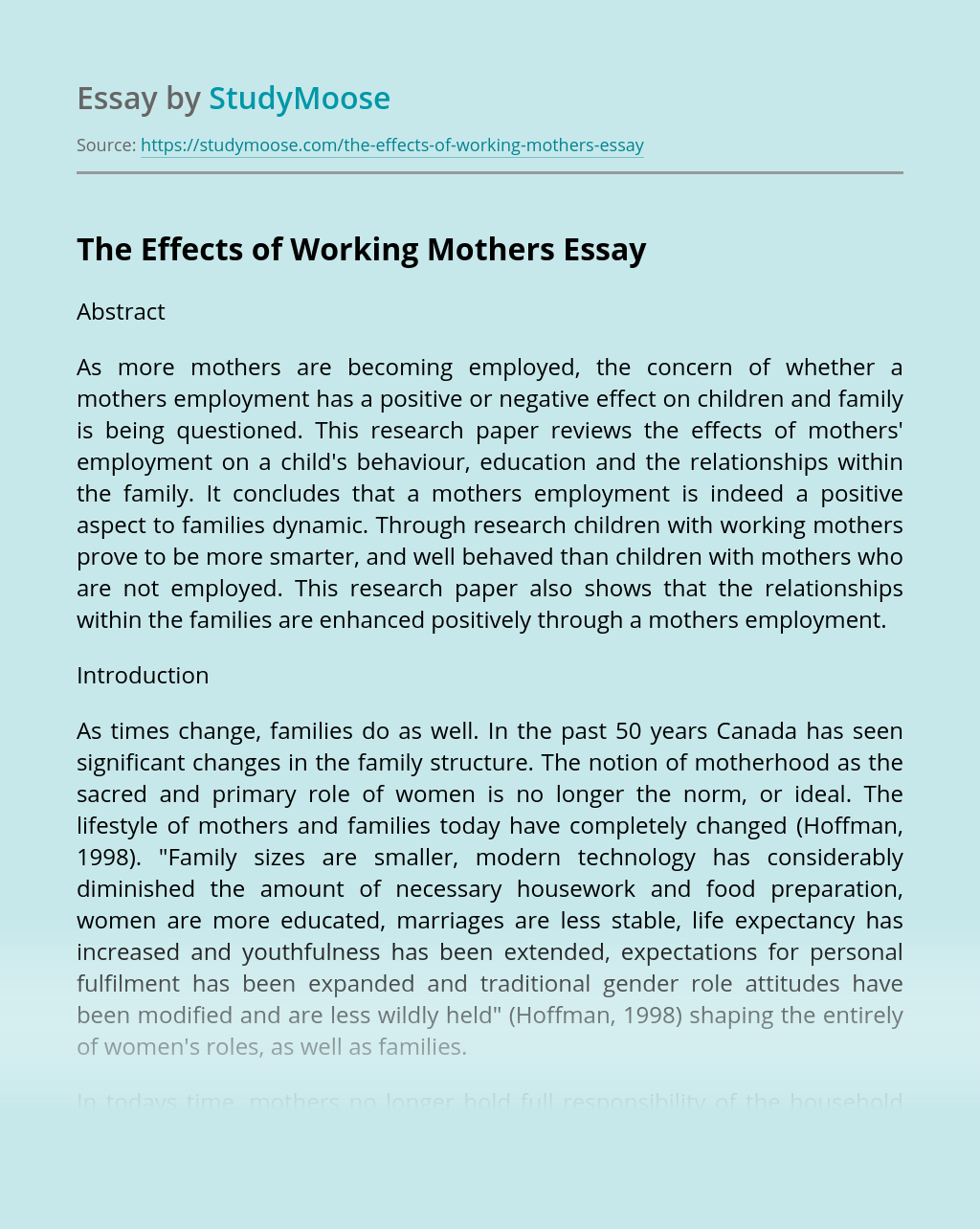