The Effects of the Internet on Our Communication

Nen Benefits of CMC and the Internet to Communication Communication has been one of the highest goals to members of any society. Without communication, there is no way that anyone would know about the day’s current events, know about new information, and know about what is going on around the world. In the fast pace of life, we as human beings need a faster and better way of communication in order to improve the quality of life. Therefore, many new technologies were invented in the last century.

Don’t waste time
Get a verified writer to help you with The Effects of the Internet on Our Communication
Hire verified writer
$35.80 for a 2-page paper

Especially, in the past few decades, the appearance of internet has played as an important innovation in communication, and the use of internet will continue rising at a rapid pace. The invention of the internet has wide-ranging effects on many domains of society.

It complements to the traditional communications which were face-to-face, mobile phones and letters. Let’s consider, in the past century, if you wanted to tell your friends something, you could just post them a letter, but how long would it take to get to your friends? A week? Or even a month? Now, the fact is that it takes us just a few seconds to tell our friends anything by sending them an email.

As good communicators, we should be competent to use technology to increase the quality of communication.

“Computer-mediated communication (CMC) provides another way to interact. Instant messaging (IM), e-mailing, blogging, and online chat are some of the many ways that acquaintances and strangers can communicate through CMC.

” (Ronald and Russell, 21). In the text “Human Communication”, Morreale shows that the more motivated, knowledgeable, and skilled a communicator is in selecting and using CMC for a given type of message in a given context, the more likely the communicator is to achieve competent outcomes  competence (182). We can affirm that technology does provide us a new way of communication, especially in personal relationship communication, and enables us to communicate faster, save our time, and decline the cost of communication. The fast pace of change in our lives encourages people to try achieving a faster way of communication. “The switch from analogue to Digital technology combined with the invention of the internet has been the major influence on our communication styles” (William, 1). We can easily realize that the invention of CMC meets most of our demands.

It helps us to send information from one country to another just in a few seconds. For example, the huge earthquake took place in Japan in April. Couple minutes later, people around the world could hear about the disaster that destroyed Japan. One significant thing is that CMC reduces the importance of distance. People can contact with their friends or the members of their families, access to latest information and make friends anywhere at anytime through CMC though they might be strangers or they might have different cultural backgrounds. Technology has become very popular and useful to everybody at any age. This was shown in the statistics done by USC Annenberg School for communication that people, who are over fifty, have learned to use technology.

About 76% of the over 50 crowd uses technology more freely today than they did five years ago; when only 51% of the over 50 generation used technology as well. In addition, the discoveries of e-mail, chat and instant message (IM) prove convincingly that CMC is a better way of communication than the old-fashioned one. Most people agree that e-mail is the fastest way for conveying information and communicating with other people. According to a statistics done by Radicati Group from August 2008, the number of emails sent per day to be around 210 billions which means more than 2.4 billion e-mails are sent every second (Heinz,1).

Along with email, IM is one of the latest programs available that gives us opportunities to keep in touch with our friends. The integration of instant message and video call allows people to talk and watch each other online. This kind of communication is like face-to-face communication. From the above information, you can imagine how important CMC is in improving our communication. Another important advantage of CMC is saving our time. Because of the rapid rate of global economic development, we are becoming so busy that we do not have enough time to communicate with others. So “CMC” is the first thing we could think of to satisfy our demands of communication. A new statistic cited from  the website internetworldstats shows that the total number of global internet users is 1,596,270,108 in March, 2009 with the world population of 6,710,029,070 (Miniwatts, 2009). The challenge of finding the right time to meet up is especially difficult for people who are separated by long distances and multiple time zones. In this case, the function of email provides a way to share information that other ways would not be possible.

Communicators can create their own messages and respond to one another without any direct contact in real life. There is an interactive relationship between CMC and personal communication. In other words, if you regularly communicate with friends and family via CMC, it is likely that you will also call them and try to see them more often. Thereto, cell phones associated with wireless allow us to contact with everybody whenever and wherever we want. In fact, it is said that cell phones with internet services have made life easier. A statistic done by PG Publishing Co. reveals that the number of cell phone users in the United States have increased from 34 million a decade ago to more than 203 million (Peter,1). Technology, indeed, plays a significant role in our life. Along with communicating faster and saving our time, CMC is a cheap tool for us to contact with people around us. It just requires a computer with a low fee internet service.

I will take the payment of internet service of the Comcast Corporation as a typical example; the internet fee for first 6 months of Comcast High-Speed Internet is $29.99 per month. After promotional period, regular monthly service charge of $59.99 (Comcast, 2011). Additionally, the cost for buying these devices is not really expensive to everybody with their incomes. We can use internet to email at anywhere, anytime we want, just with some basic steps. It helps us communicate immediately and save a lot of time. According to a Radicati Group study from August 2008, there are about 1.3 billion email users worldwide. That makes a tad more than one in every five people on the earth use email (Heinz, 1). Email has eventually been popularized in communication. As the matter of fact, we can save our cost and time through new technologies.

For instance, the old-fashioned way of communication, a letter, took us a lot of time and money to keep in touch with other people. The letters sent through post office would probably take among a week to even months on delivery, not mention that it even can be lost before the particular person gets it. Moreover, it is not completely sure of security; it can easily be opened and read or sent to wrong addresses. Recipients will not receive the information, and this thing will be inconvenient if there is an emergency. For those reasons, we cannot deny that technology is an indispensible part of human life. All in all, the modern technological boom of the internet age offers people the abilities/chances to communicate and to work closely together. “Information technology not only has a significant impact on various fields of human endeavor, it also creates the potential for greater operational efficiency and influences changes in the way business activities are performed,” said Suanu (Suanu, 2008).

We as human beings are able to communicate more often and more effectively thanks to the efficiency of the media provided by technology, in which communication is available. Particularly, CMC have made it easy so that people, their friends and their families can stay connected no matter how many miles apart they are. The evolvement of technology makes our life more interesting to live. It will satisfy all the needs that are required by society. If people feel the need to see the person they are talking to, they only need to link up their webcam onto the World Wide Web and set up a microphone and instantaneously they will be able to communicate with friends and family members. Also, technology can be the translator for two people who speak different languages but sharing similar interests who before could never communicate because of a language barrier. Technology will inherently impact on our communication, making it more available, faster, and more efficient than years past.

The Effects of the Internet on Our Communication. (2016, Oct 21). Retrieved from http://studymoose.com/the-effects-of-the-internet-on-our-communication-essay 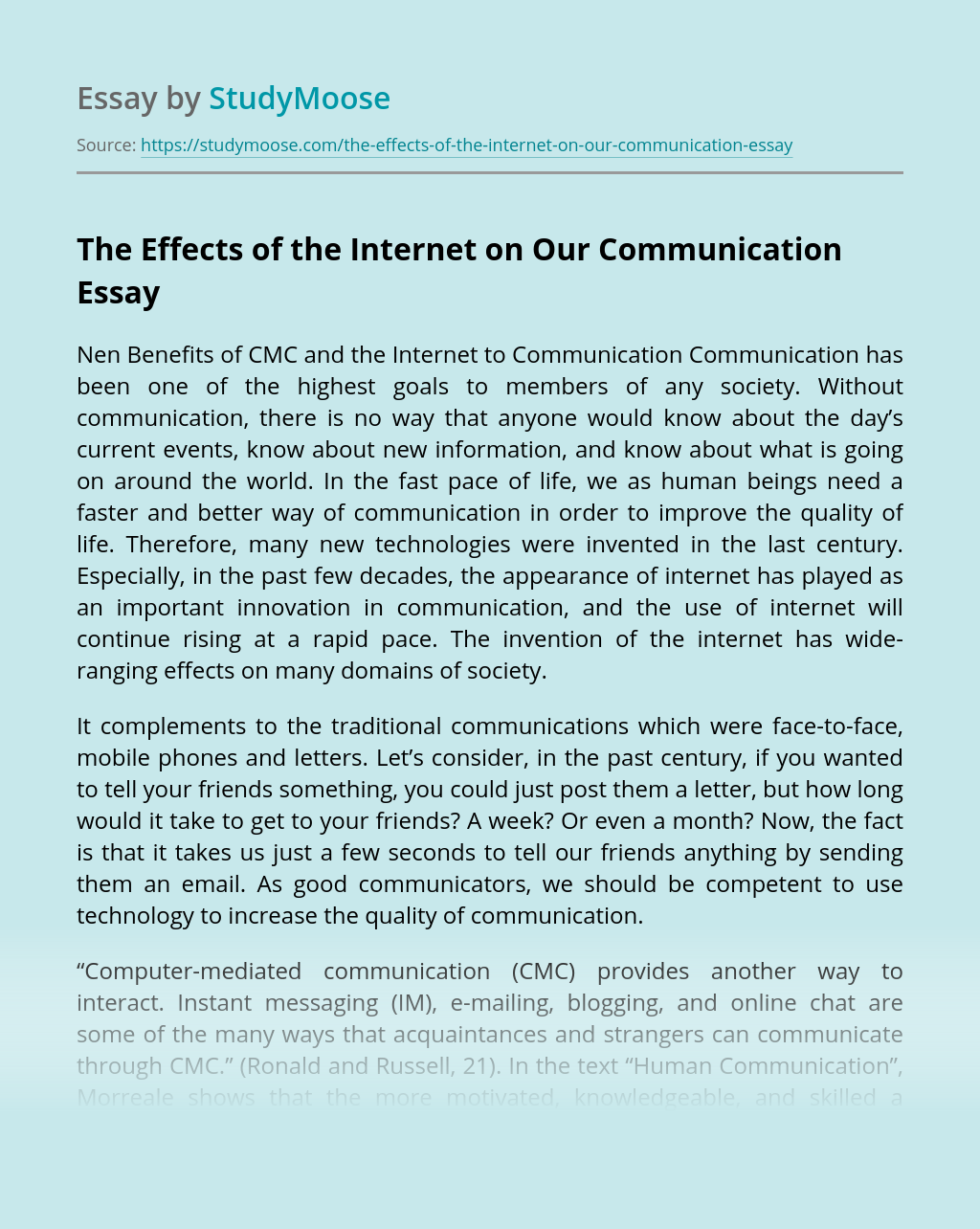 Don’t waste time
Get a verified writer to help you with The Effects of the Internet on Our Communication
Hire verified writer
$35.80 for a 2-page paper
Stay Safe, Stay Original