The Effects of Social Media on Students

It is amazing how the Internet is changing people’s lives. People are able to quickly do research and gather data on the web, navigate through websites, and most people are able to find anything on the Internet in a matter of seconds thanks to search engines like Google. The Internet has provided our world with a different means of communication and is accessible to anyone at any time at a click of a mouse. Despite all the beneficial aspects of the uses of the Internet, as users of social media increase, so does the debate of whether it gives good influences to individuals.

Turn in your highest-quality paper
Get a qualified writer to help you with
“ The Effects of Social Media on Students ”
Get high-quality paper
NEW! AI matching with writer

Social media, however, has a negative aspect due to the fact that it affects relationships with others, people easily get distracted, and it may cause cyber bullying.

According to researchers, social media is affecting the way kids look at friendship and intimacy. Patricia Greenfield, a UCLA developmental psychologist says that teens’ ideas of friendship have been influenced by their immersion in the on-line world since young people feel socially supported by having large networks of on-line friends.

This results in a decline in intimate friendships. Instead, many young people now derive personal support and affirmation from ‘likes’ and feedback to their postings. Other opinions are in argumentative essay samples.

Other research at UCLA shows that teen’s preferred mode of communication, texting, makes them feel less connected than face-to-face communication. In the studies of various forms of communication between friends, the closer the experience was to in-person conversation, the more connected the friends felt.

For example, video chat rates higher than a phone call, but the phone creates a closer connection than texting. As one can see, the influence social media has on teenagers cause them to view the relationships they share with others differently. Not only does social media affect relationships, it also distracts others from what they are doing.

Many people can say that social media is one of the most common ways of a distraction for students. It has an effect that is both harmful to the productivity of students and has been proven to decrease the student’s grades academically. Networks such as Instagram, Twitter, or Facebook are very hard to ignore since there are constantly new information being updated, like pictures being posted and status updates of friends. Now, many students are admitting that social media networks are the cause to their grades suffering.ty Study’s co-writer. Since social media networks are accessible to anyone that has a smartphone, people can easily get sidetracked and lose a lot of time without even noticing. Students are not realizing the harm they are doing when they are taking thirty minutes to check their accounts when they are really supposed to be focusing on schoolwork. To summarize, social networks are causing a disturbance in students’ focus.

Another critical thing that social media allows others to do are becoming cyber bullies. The introduction of social media has brought about the unfortunate rise of cyber bullying; a social concern that has taken previous forms of harassment to a whole new level. Users who would ordinarily avoid confrontation for fear of physical or lawful reprisals find themselves free to act online as they wish, insulting and harassing others without consequence. The masked identity that the Internet gives also causes other concerns for the victim, with the unknown identity of the bully causing a heightened sense of stress and anxiety.

In contrast to traditional types of bullying, cyber bullying allows those on the Internet to post personal information. This is much worse than a face-to-face type of scenario because online activity is permanent, meaning that it will always stay on the Internet, allowing hundreds or even thousands of people being able to view it. The views being untraceable, and the ready available access to ‘share’, victims are surrounded by a mass scale of humiliation. There is no doubt that cyber bullying is a horrible thing people can do through social media.

Teenagers across the world may believe that social media has a positive impact on their lives because it makes communication with friends quick and easy, however, it takes away meaningful relationships. Now, people prefer communicating through the touch of their fingertips, and not face-to-face interaction, which is much less meaningful. You might also think that social media allows you to make new friends, but in reality you may never know who is behind that computer screen. People have the ability to become a different persona and escape their reality and create an altered image of them online. Proponents of social media might say that it makes them feel better about themselves, but that is not the case. People who use social networking sites are prone to social isolation. Social networking can exacerbate feelings of disconnect, and put children at higher risk for depression, and low self-esteem.

Social media has a damaging effect on the lives of students’ since it can negatively affect relationships with others, cause them to be inattentive, and can get cyber bullied. Students will always have the choice of how well they do in school. They are in control of their own grades, and what they want to retain. Having the perfect balance between a social media network and schoolwork can be achieved through self-discipline and suitable scheduling. Students need to start changing their habits of how much time they spend on social media. Digital communication in itself is not a bad thing, but if one is losing out on opportunities to connect with people as well as they can, then that is a problem. Next time, one can make a difference by just being a little more mindful of a person and call those out that are behaving negatively.

The Effects of Social Media on Students. (2016, Aug 07). Retrieved from https://studymoose.com/the-effects-of-social-media-on-students-essay 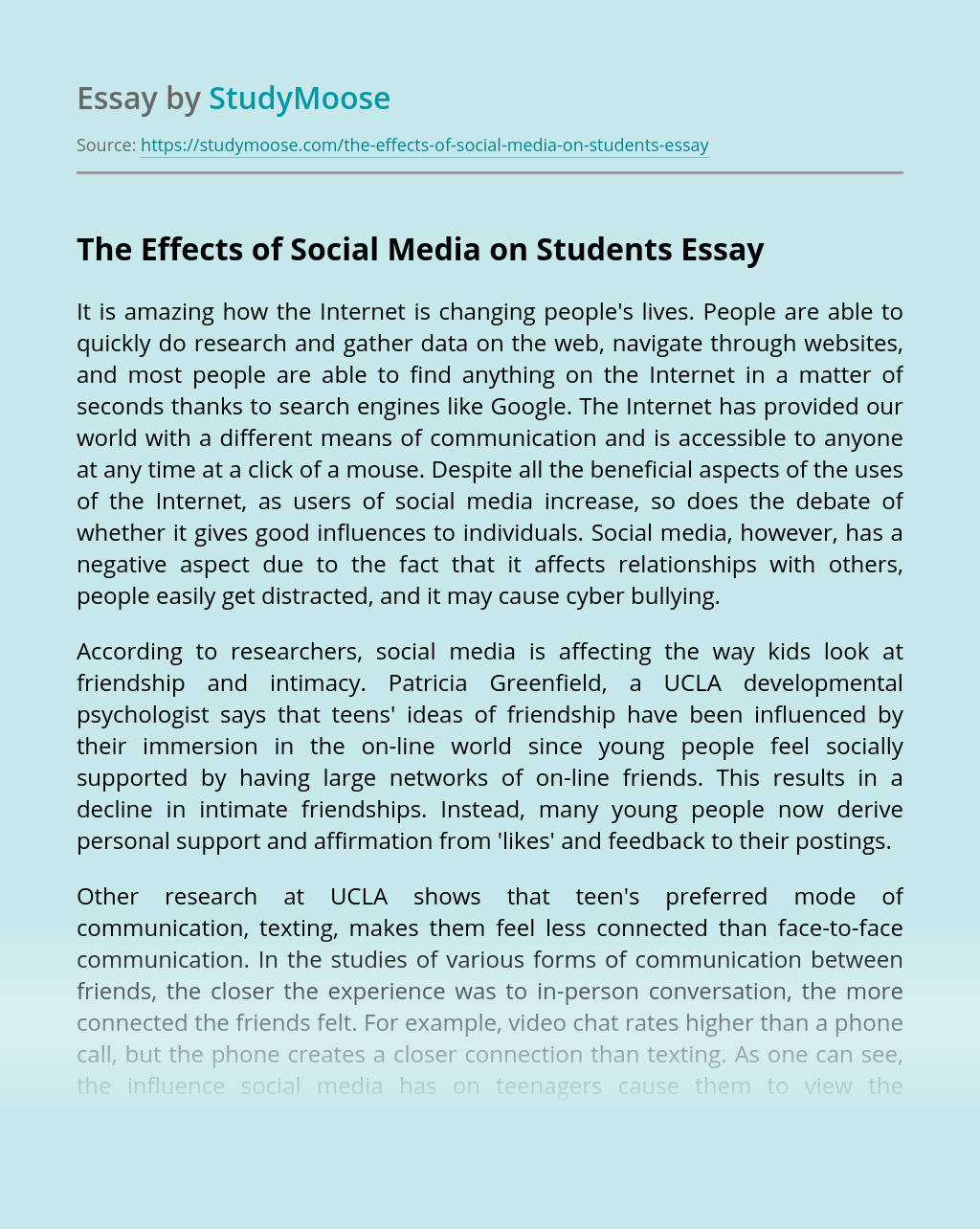 Turn in your highest-quality paper
Get a qualified writer to help you with
“ The Effects of Social Media on Students ”
Get high-quality paper
Helping students since 2015
Stay Safe, Stay Original