The Effect Of Digital Technology On The Music Industry

Nowadays, teenagers are living constantly surrounded by technology. Even if the younger generation may not see it, technology has had an impact on different factors. The widespread use of digital technology in the music industry has allowed consumers to reproduce digital versions of copyrighted songs inexpensively, with the help of many software and websites. There has been an increase in digital copying activities and those are most of the time claimed responsible for producers’ loss in revenues. While some people claim that the increase of digital technology has killed the music industry, in fact it has lead to innovation and new ways of consuming and sharing music, such as iTunes or YouTube.

Don’t waste time
Get a verified expert to help you with The Effect Of Digital Technology On The Music Industry
Hire verified expert
$35.80 for a 2-page paper

The growth of download and exchanges of music are held responsible for the decrease of music sales since the end of the 90s. Information and communication technologies, and specially Internet, changed the logic of consumption and the process of producing music. The music industry has been touched since 2000 by a crisis and the organizations representing this industry like to claim that web users who are exchanging private copies via peer-to-peer networks are to blame for this crisis.

Peer-to-peer networks are networks where users act as both suppliers and consumers of the content. The file-sharing, and peer-to-peer, website Napster emerged in 1999 and since then, music sales in the United States of America have dropped 53%. However, the American government is fighting against those file-sharing websites and a few of them were seized, such as LimeWire in October 2010.

One of the biggest challenges for the music industry was to deal with the invention of the MP3 file.

This file came to life between 1996 and 1999 and since then, piracy became more and more important. The MP3 file enables people to save files on computers and to share music with anyone in the world. It led to the creation of music sharing software, such as Pirate Bay or LimeWire. The Record Industry Association of America (RIIA) proved the effects of technology on the music industry by showing on their website the fall in the overall size of the sound recording industry in the last 10 years. Indeed, in 1999, its size was $14,584.5 billion and in 2008, it was only $8,480.2 billion. Moreover, between 2004 and 2009, it is said that 30 billion songs have been illegally downloaded. Therefore, the Record Industry Association of America estimates that piracy causes an annual harm of $12.5 billion in losses to the United States only. Moreover, the Institute for Policy Innovation pegs more than 70,000 lost jobs and $2 billion in lost wages to American workers.

However, those are macroeconomic factors and the positive effects of technology are overtaking the negative ones. Indeed, digital technology has created new medias. YouTube affords new ways to consume, create and share music and it has put in the spotlight a lot of artists. For instance, well-known artists such as Esmee Denters or even Justin Bieber have been discovered thanks to this media. Moreover, YouTube is the third most visited website in the world behind Google and Facebook and 100 hours of video are uploaded to YouTube every minute. One of the major facts to keep in mind is that YouTube are paying artists and music labels thanks to thousand of advertisers using TrueView in-stream. Indeed, Google claims that free music generates as much money for the music industry as paying for it. Google Inc. disclosed during the Midem, a yearly event dedicated to the music industry that YouTube has paid out more than $1 billion to music rights holders over the past few years.

Moreover, Chris Maxcy, YouTube director of content partnerships, said that YouTube’s larger music partners on the site are making millions of dollars per month. But YouTube does more than allowing artists – amateurs or professionals – to share their creation; it also gives them the chance to get feedback on their work. Indeed, viewers are able to comment and rate videos. Moreover, artists are after a special title: the VEVO record. VEVO is a joint venture of Universal Music Group, Google (which owns YouTube), Sony Music Entertainment and Abu Dhabi Media. The VEVO record is given to the artist who gets the highest number of views in 24 hours. When a music video has a lot of views, artists are guaranteed that their music is going to be displayed on radio and is going to sell a lot.

The holder of the record is currently Miley Cyrus with the song Wrecking Ball. Indeed, her music video received 19 millions views in its first 24 hours. The song was released on August 25, 2013 and as of January 2014 “Wrecking Ball” has sold three million copies in the United States. The song debuted on the Billboard Hot 100 at number 50 but it soon became number one after the release of the controversial music video, which shows the impact of YouTube on the music industry. Furthermore, the American music magazine Billboard added U.S YouTube data to its platform, which means that it is now a factor into the chart’s ranking: it joins digital download track sales and physical singles sales.

ITunes created the first legitimate digital music store that competed with piracy. On April 28, 2003, Apple released the iTunes store. The music industry had finally an application to earn money from the sale of digital music, after years of suffering from the power of Napster and piracy. Steve Jobs created a new link between the artist and the customer. Indeed, instead of having to go to a store and having to buy an album just to get one specific song, customers are now able to pay only 99 cents (1,29$ in some case) to listen to a song. Steve Jobs thought that music lovers would rather pay 99 cents a song if it was easier than stealing the song; he was right. Indeed, iTunes has more than 500 million users in 119 countries and more than 25 billion songs are available. It is also said that more than 15 000 downloads are made each minute.

Independent labels and artists can also compete with the majors, as iTunes gives promotional space alongside the major labels if you present great music. iTunes has also helped musicians develop ways to promote their music. Nowadays, artists make most of their money by touring and selling music on iTunes is a way to advertise for a tour. For example, a pop-artist recently launched the concept of “music Monday”: each Monday, and for 10 weeks straight, the artist would put a new single (1,29$) on iTunes to advertise for his movie. It enabled the artist to make more money than he would have made if he release the songs in an album. As a matter of fact, iTunes offers many ways to keep the music industry afloat.

The Effect Of Digital Technology On The Music Industry. (2016, Sep 16). Retrieved from http://studymoose.com/the-effect-of-digital-technology-on-the-music-industry-essay 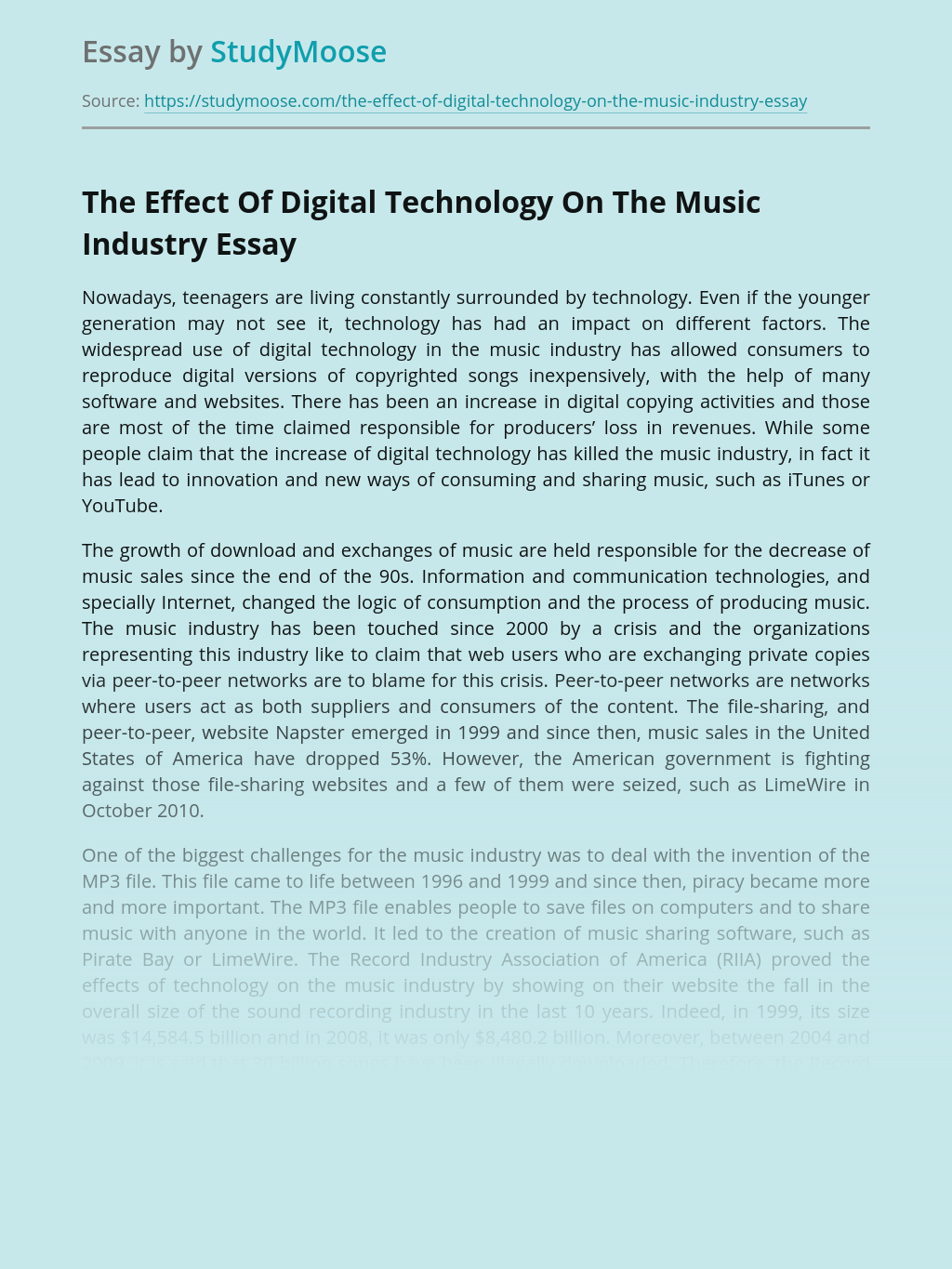 Don’t waste time
Get a verified expert to help you with The Effect Of Digital Technology On The Music Industry
Hire verified expert
$35.80 for a 2-page paper
Stay Safe, Stay Original