Record companies today believe that downloading music for free is a crime and hinders the sale of music in stores. Though it seems to be free, this paper present to the pros and cons of downloading music from the Internet. Important points will be discussed are the file sharing programs history, why downloading should be free and lawsuits for downloading music. Peer-to-Peer technology is a form of file sharing that enables the sharing of computer resources such as, files by, direct exchange with other systems.

P2P file sharing started with Napster in 1999 and has become the most popular way to share files (P2P File Sharing). Before Napster, computers for sharing files were extremely limited to the exchange of files on the file transfer protocol. Napster changed file sharing because of increased speed and Internet connections. Therefore, file-sharing programs like Napster became popular and opened doors for a variety of file sharing programs. These programs can do more than Napster was originally intended to do.

They can develop file-sharing networks and swap everything from music files to video files (“P2P File Sharing Overview & History”). Some P2P file sharing networks that have emerged since Napster are: Morpheous, Kazaa, Aimster, Filetopia, iMesh, Songspy and WinMX. P2p networking is here to stay and it is evident that Napster played a significant role in inspiring other networks to expand by offering a variety of free music and useable software. With computer age growing at a rapid rate, many consumers use the Internet for a number of reasons.

One of the most popular uses is downloading music.

Downloading music has become a plague that haunts the music industry on a daily basis. File sharing has allowed a vast number of people to acquire music that would cost a great deal of money in stores. Music companies argue that file sharing networks should not be able to allow consumers to download popular music. Declining sales is the number one argument record companies use to defend their rights concerning downloading music. Many believe that people will download and burn CDs containing their favorite songs and cause the music industry to lose a great deal of time, effort and money.

Further arguments claim that CDs cost entirely too much money given that many may want the CD for one particular song, further music companies fail to realize that some songs that are downloaded using the P2P network are only used for those songs that are hard to find in stores. Therefore, Peer-to-Peer networks have many useful applications and should not be closed to stop music privacy (“A debate with a focus on trading MP3’s”). Several years ago, the music industry had the same argument about cassette tapes, stating that the copying of cassette tapes did not hinder the sale of music. Websites have now enforced the copyright law.

This implies that some music downloads are restricted and may charge a fee to download. Consequently, downloading music does not hurt the music industry but allows individuals to acquire music that is very appealing to the ear. Downloading music over the Internet is also encouraging music buyers to buy more CDs. Artist receives a wide range of publicity when their music is traded over the Internet. Some consumers download music to spite the artist and record companies because they tell them not to download their music. Another reason would be that MP3s are not a physical thing; so “stealing” a song loses no actual lost value.

A friend of mind told me that since he has started downloading songs form the Internet; he’s brought more CDs. A point that is of interest to me would be if sharing with one friend were ok, then why is sharing with everybody else wrong? One of the main reasons behind downloading music is that it’s actually, trying before you buy. It also gives people a chance to sample the CD to determine if the CD is necessary to purchase. On the other hand, if companies charge a fee for downloading music, they in turn will receive compensation that they would ordinarily receive if a person would purchase a CD from the store.

Music fans continue swapping songs over the Internet; many recording industries have threatened to sue fans for downloading and recording songs. The threat appeared to have little effect on the pace of downloading from the most popular file sharing services (“Lawsuit threat not slowing music file sharing, but many treading carefully”). Downloading music can be legal or illegal; fans believe that downloading songs on a single computer allows them the full right to download whatever songs they wish. The record industry will not win if the result is to sue people. They can sue all they want, but this will not increase CD sales.

Criminalizing these individuals would be the wrong approach to adopt, because this problem would be ongoing. Music lovers are still interesting in maintaining a CD collection and downloading has not affected their desire for ownership (“Lawsuit”). It is evident that people would buy more CDs if the prices were lower instead of turning to their computers. Filing lawsuits against individuals is hopeless and will not make CD sales to rise. This approach will only make fans angry which in turn would hurt the music industry. In conclusion, being able to download music has its advantages and disadvantages.

Two solutions to the advantages would be to download music for a fee, which would allow artist to be compensated or allow record stores to have booths with CD burners, which allows consumers to make a CD to their liking. Also, networks would not be violating the copyright laws. The disadvantage is that individuals would not be allowed to freely copy as many songs as they would like, especially hard to find songs. Consequently, downloading would not be as successful as it has been in the past and networks would not get as much attention as they were receiving. 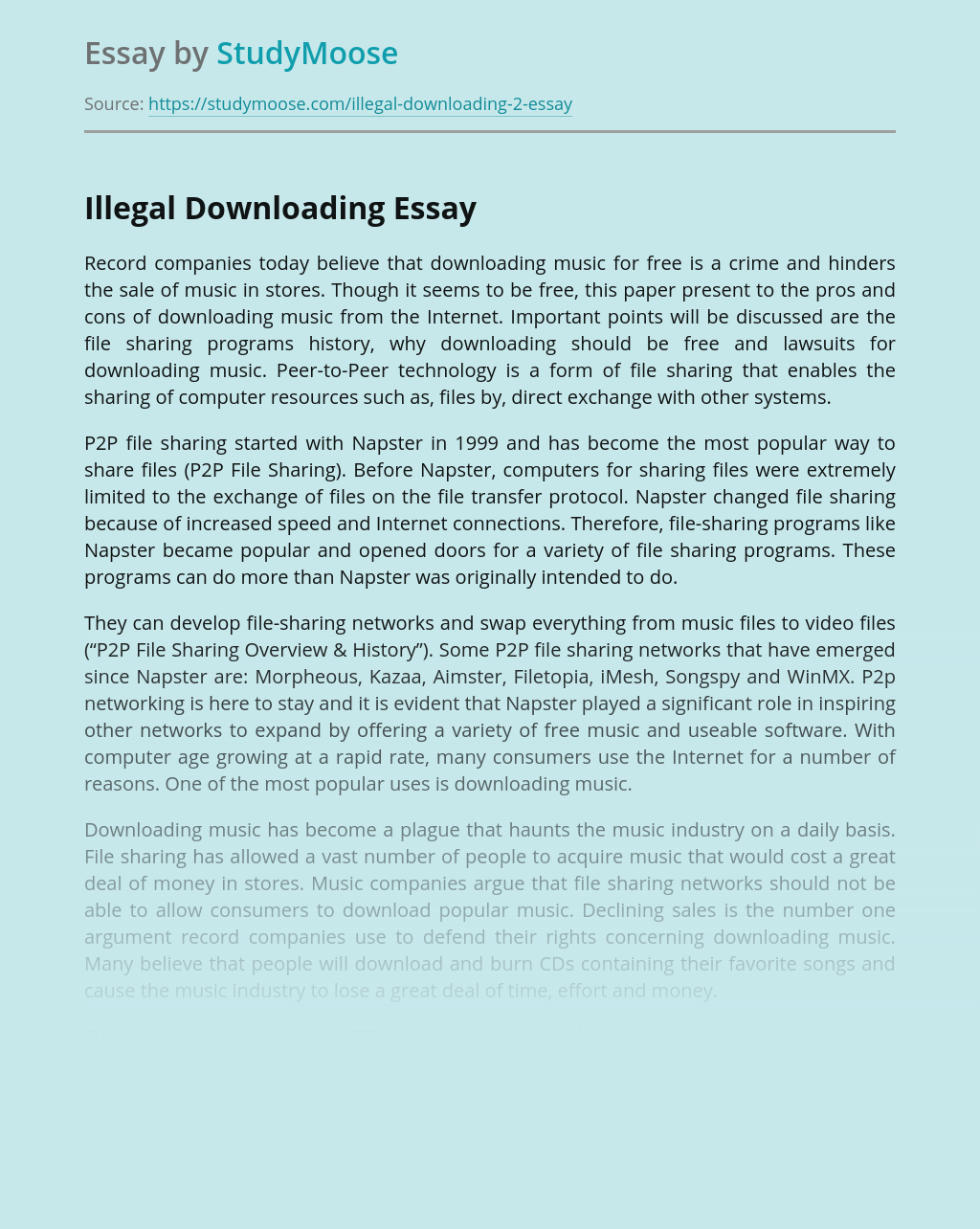