The American multinational enterprise, Google Inc., predominately leading the globe in internet services and products. They provide online advertising technologies, search engine, cloud storage, applications and other software. Their customers are advertising agencies and large businesses who pay to be exposed on the many free services Google offers to internet consumers. The largest shareholders Brin Sergey and Larry Page, founded Google while attending Stanford University. Google is the most universally used internet search engine, which allows them to gather interests and information about the consumers using their free services.

Don't use plagiarized sources. Get your custom essay on
“ Primary Stakeholders of Google Inc Marketing ”
Get custom paper
NEW! smart matching with writer

Advertisers spend billions to strategically place their ads through Google because the free Google services accumulates personal interests and information needed to identify consumer demographics on the internet.

In recent years the government and general public have raised concern about consumer privacy, as well as, the monopolistic presence in the internet market. Their shareholders are predominately internal making any external influence to the company improbable. Google employees are carefully selected and generally consist of newly graduated software geniuses; recently the media has criticized Google for the majority of their employees being Caucasian and Asian males.

Google Inc. has a responsibility to manage its operations to maximize shareholders profits, but how well does it treat the other four primary stakeholders: the government, employees, customers, and general public. (Google, n.d.)

Google has gained the government’s attention through multiple investigations over the years. In 2011, Google government officials from Europe joined the United States Congress to bring antitrust investigations against the Company.

The next year in 2012, the Federal Trade Commission, FTC, conducted an investigation to gather evidence suggesting Google is a monopoly. Apple competes through SIRI and the app store as alternative search methods to Google. Amazon holds the lead in product searches and Facebook is commonly used to search for trusted customer reviews by friends.

The FTC was unsuccessful in proving their monopoly case and Google still dominates the internet/ computer market easily eliminating any start up competition. The Google business model makes sure no shareholder has a vote that could significantly impact the company, but the way media, government, and the majority of web users, interpret their activity could influence the company’s objectives. The FTC government agency has the influential power to investigate and bring media attention to the topic of Google’s seemingly unfair advantage in their market (Singer, 2012).

Approximately 99% of Google’s revenues are derived from businesses advertising on the free services it provides users. In Google’s system many advertisers bid on keywords. Popular keywords like “Miami Florida” are sold for much higher “value-per-click” than other less popular search topics. This revenue method allows Google to attract both large corporations and small business to place advertisements. The free services provided for Google users has destroyed markets. Decreasing the demand for products/ services like GPS, road atlas, and current traffic status by allowing the free anytime access to Google Maps.

Google distracts its users with free services that make their life easier when Googles actual intent is selling individual attention and information about the users to advertisers. Google users are the product and not the customer. Through Google user’s searches and personal information like passwords saved in google chrome or contacts from gmail accounts, Google can deliver a product to advertisers tailored to their exact needs; people looking for shoes are delivered to shoe sellers, and people located in a certain town are delivered to local restaurants (Newman, 2011).

Google Inc. is a huge company owning 66 percent of its shares leaving 34 percent of the company owned by external shareholders. Founder Brin Sergey owns the largest amount of shares by an Individual at 21.8 million shares. There are less than five major external shareholders are institutions such as, FMR LLC, Vanguard Group INC, State Street Corp, Price T Rowe Associates INC, and Barclays Global Investors UK Holdings LTD. Unlike Microsoft, Intel, and Apple; Google does not give cash back to its shareholders. Amazon and Facebook also do not yield cash dividends, but they are not as large, mature or as profitable as Google.

If Google wanted to increase its shares a capital return program could be attractive to new investors. The cost of Google offer such a program would mean applying a payout of about 1.5 to 2.5 percent to compete with its peers. Google has three classes of shares: Class A gets one vote per share, Class B gets 10 votes per share, while Class C receives no voting privileges. Class B shares are only held by company insiders so Brin Sergey, Larry Page, and Eric Schmidt own 92.5 percent of these shares, thus the majority vote (Niu, 2015).

Google is universally acclaimed as a great place to work. Its stock has soared 674% since its inception in August 2004. Their offices abound with areas designed to promote interaction, like a bowling alley in the California office or a pub lounge in the Ireland office. The search engine company provides its employees with a great health plan, legal aid, travel assistance, and a college reimbursement plan. If an employee dies, Google will continue to pay 50% of the deceased’s salary to his or her family for a decade (keep in mind they higher new graduates with an expected long life ahead of them). The California headquarters lobby is decorated with lava lamps, a piano, and search query projections posted on the wall.

There are colorful fun exercise balls and bicycles for physical fitness in the hallways. Google receives 3 million applications annually and only higher about 0.2%, statistically Ivy League schools have a higher acceptance rate than Google. Engineers make up the majority of Googles employees and their salaries range from $ 100 thousand to $ 200 thousand. Engineering interns make approximately $ 7 thousand monthly (Unknown, 2014). Over all Google is more than generous when it comes to the treatment of their employees and promotes job low turnover (Waggoner, 2013).

According to Forbes magazine in 2013 four companies tied for first in corporate social responsibility: Microsoft, The Walt Disney Company, Google and BMW (Smith, 2013). Google has gained its popularity though the free services it provides all Google users. They have about $62.3 billion in cash and even after subtracting out its long and short term debt it has $57.2 billion. The majority of its profits, $41.8 billion, are held in foreign subsidiaries for tax avoidance.

Being a technology based company, replacing hardcopies with electronic documents saves the company money as well as the preservation of the environment. Therefore google can brag about its efforts to achieve “green” status whether they are simply eliminating supply costs or have a general concern for the environment. Google has minimized the environmental impact of their services. Their carbon footprint is practically zero, but it doesn’t need an access amount of environmental resources (Google, 2015).

Google is a young, expanding, and profitable company. The government is concerned and continually investigating Google because of its controversial monopoly in the search engine market and antitrust based on the selling of user information. The general public and government should be concerned that Google invests approximately two –thirds of its cash overseas to avoid tax laws in the United States. The advertisement customers that Google provides as their revenue generating services are given information tailored to view ads strategically and that makes Google more successful than other internet marketing company.

The shareholders of Google are mostly internal owners; no capital return programs have been established and all impacting votes are controlled by the internal shareholders only. The employees are treated extremely well compared to companies across the globe. Google will continue to grow based on its business plan, which brilliantly manipulates the general public users into thinking they are getting services for free while they make billions by selling adverting companies the information they want without breaking any laws. Google could treat the general public and government stakeholders better by improving user privacy and cease avoiding taxes. 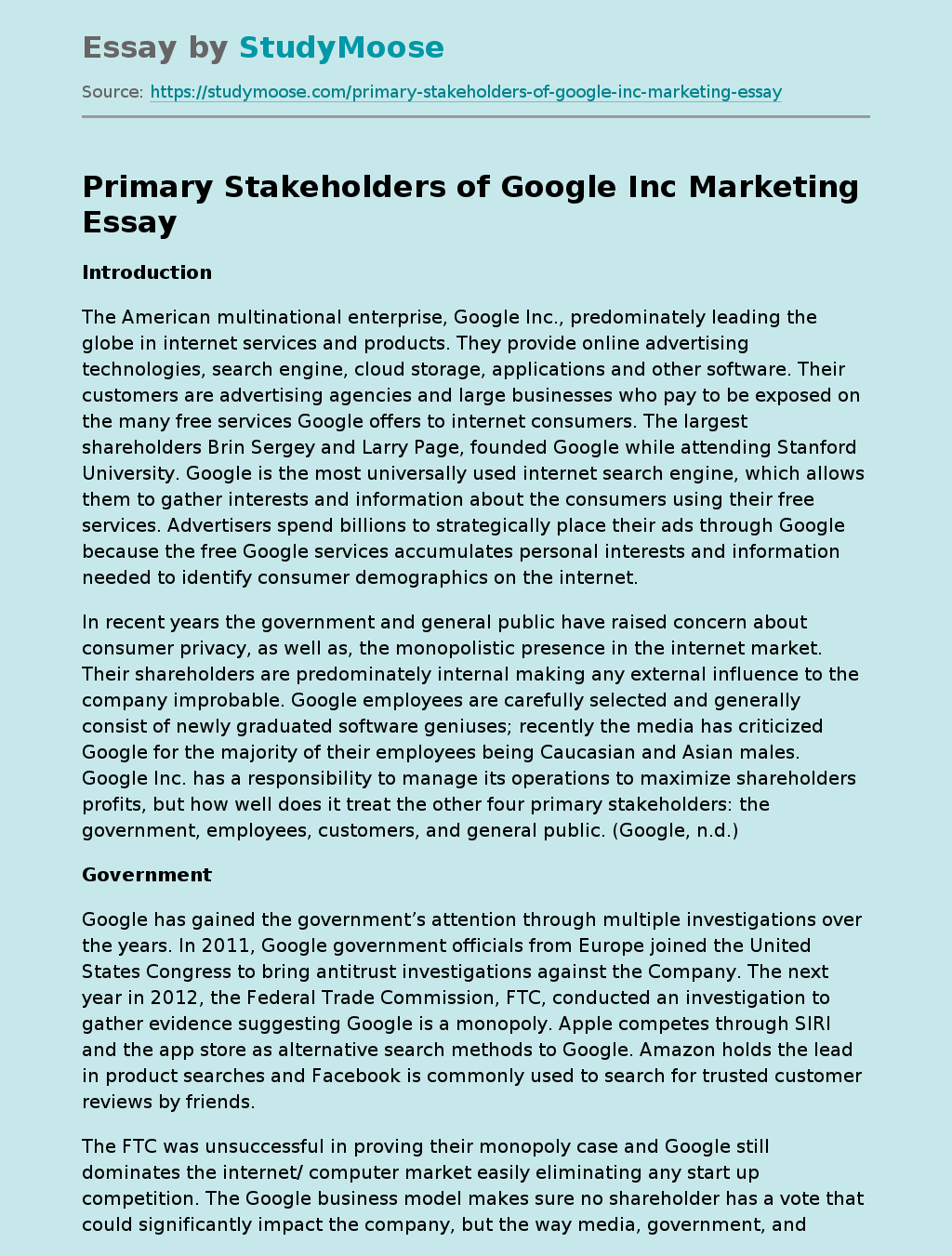