The Dome of the Cathedral, Florence

The Cathedral was designed and built in between 1377-1466 by the architect and visionary Fillipo Brunelleschi and numerous others. However parts of the building appear to date back to the 11th century, by a sculptor Arnolfo di Cambio (Farfan, 2001). The cathedral itself is located north of the Piazza del la Signoria and towers over the city. Initially there had been a great deal of competition with regards to who would be granted the contract of building the dome (also known as the Santa Maria del Fiore), but Brunelleschi used the innovative idea of constructing the dome support structure without a wooden center (Farfan, 2001).

Don't use plagiarized sources. Get your custom essay on
“ The Dome of the Cathedral, Florence ”
Get custom paper
NEW! smart matching with writer

In 1420, Brunelleschi was granted the contract that involved the inner support being constructed from brick alone (Farfan, 2001). The dome consists of a complicated geometrical design, with an octagonal drum that with several empty shells within to lighten up the interior of the structure, this Brunelleschi called the ‘oculus’ (the eye). Brick ribs crisscross the interior but do not serve as a support for the building.

Proficient in: Cathedral By Raymond Carver

The springing put of the dome is approximately 177 feet above ground level. From the base of the drum to the top of the dome is around 108 feet, showing the massive volume of the building as a whole.

The radius across the outer edges of the octagonal drum measures 176 feet. An estimated amount of bricks used is in excess of 4 million (Farfan, 2001). The octagonal domes inside the cathedral were completed in succession of one another in order to create a stable support. The process is complex and dependent of precision timing and measurement.

Bricks were laid using the ‘herringbone’ method, being laid on sloping beds in a ring like fashion, the spirals are closed with protruding bricks laid lengths ways instead of breadth.

The cones within the spiral are divided into 5 equal geometric points in order to locate the ‘pointed-fifth curvature’. The axis of the inverted dome corresponds directly with the domes outer structure. The slack line corresponds with the bricks beds resting on the inverted cone surface. As work commenced the domes vertex shifts upwards (Farfan, 2001). The completed dome is supported by 3 half domes on the exterior of the structure. The ‘quinta acuto’ (eight corner ribs), the method of the radius divided into four-fifths of the maximum crossing span, is visible in even the half domes (Salvadori, 1980).

Sandstone bricks were used within an iron reinforcement, prevent the collapse if the dome under pressure from its parallels (Salvadori, 1980). This was the largest dome built without wooden centering. This was the first instance that Doric, Ionic and Corinthian orders were used in architecture since the ancient times. Constructed out of sandstone and iron reinforcements, Brunelleschi designed tiles for the surface of the dome that would be easy to maintain and resist the elements (Salvadori, 1980). The outer facades are constructed with visible cantilevered arches, presenting themselves as alcoves facing onto the street below.

Atop the Dome is Brunelleschi’s famous lantern which is hollow marble. The ornately decorated exterior is what can be described as truly Renaissance grace, elegantly yet elaborately consisting of numerous alcoves, facades and frescoes. The main facade is pink and green. The interior has stained glass windows in order to allow as much light in as possible and the paving entering the dome is marble. The interior also has frescoes of The Last Judgement, by artists Giorgio Vasari and Frederico Zuccari. The interior is extremely vast with extraordinarily high ceilings and is extremely well lit.

The oculus sheds a direct beam into the middle of the building. The Duomo itself fits in with the Renaissance architecture surrounding it, including The Baptistery designed by rival Ghiberti, whose equally Gothic sculpture and is equaled if not surpassed by Brunelleschi’s ornate facade. All machinery and hoists used in the building of the dome have been removed, however numerous modern students of architecture have rebuilt models using versions of the machinery that would have been utilized, as well as making bricks in the same way as Brunelleschi would have done.

Because of the openness of the structures interior, it is easy to move around in and facilitates vast numbers of people at one time. It is also constructed so that most of the inner quadrant can be viewed from the center of the building. Brunelleschi initiated the idea of linear perspective, with all points converging to a centralized point, this is evident in his construction of the dome particularly. This was also the beginning of the humanism approach, focused on the sensibilities of people. This meant that the building itself had to be as user friendly as possible while still being an aesthetic asset to the city.

The idea of perspective for Brunelleschi was the most important aspect of humanism, drawing from the postulate that art is how the person views their world. Therefore the artistry of the dome had to by some standards be appropriate to the period, social climate and what the people of the city were expecting (see footnote 2). As a result, much of the richness associated with renaissance art is visible in the construction of the dome, but it remains relatively unobtrusive, its colors being predominantly bronzes and burnt browns.

The interior flagged marble floor has alternating pieces of dark ruddy brown and cream, making at more aristocratic than religious. This lends itself heavily on the idea that the initial purpose of the dome was not religious, but more a centerpiece around which the city could be arranged. It has the ‘landmark quality’ that associates it with other countries and cities almost via its competitiveness. The entrance to the dome, through Giotto’s bell tower, which was completed only after the death of Brunelleschi.

Three doors mark the entrance and exits of the dome. The main door is called the Almond door due to its elliptical shape. It has a painting of The Assumption of Our Lady Into Heaven, by the painter Nanni Bianco. Rich renaissance colors mark this painting as a distinct aspect of renaissance culture. High up on the side portals of the main painting are two small statues of the prophets by sculptor Donatello. There is also a mosaic in the lunette of the portal door, by the artists Domenico and Davide Ghirlandiao.

Due to the three small domes supporting the dome itself, entrances and exits are through these portals, meaning that one can basically enter and proceed through the opposite entrance if necessary. The Dome of Florence Cathedral could basically be described as a landmark that does not intrude on other buildings within the Florentine setting, instead it serves as a central point in the city and has become a tourist attraction over the years. For students, the remarkable invention of stone supported domes has also become a topic of discussion.

Previously having used wooden support scaffolds, the stone version may have been costly and time consuming but it gave the opportunity to build stronger and larger constructions. IT has been used over centuries as a gathering place for local meetings and also to house the some of the nost beautiful renaissance artworks of time. It is possible that Brunelleschi’s ideas about light and space influenced more modern architects such as Lloyd Wright, whose ideology was to allow as much natural light as possible into the building.

The colors of the interior of the dome allow this natural light emanating from the oculus to be expanded and rather than giving the cold internal feel such as some of the older basilica’s would, the dome gives off an intensely warm energy. This was certainly an invention that changed the face of architecture and has long held it position in the history of the art. Sources: “Dome: Almond Door”. 2008. FirenzeViva. com. Accessed: 10 February 2008. (http://www. firenzeviva. com/duomo-firenze/duomo_almond_door. htm) Farfan, Maria.

The Dome of the Cathedral, Florence. (2016, Aug 19). Retrieved from https://studymoose.com/the-dome-of-the-cathedral-florence-essay 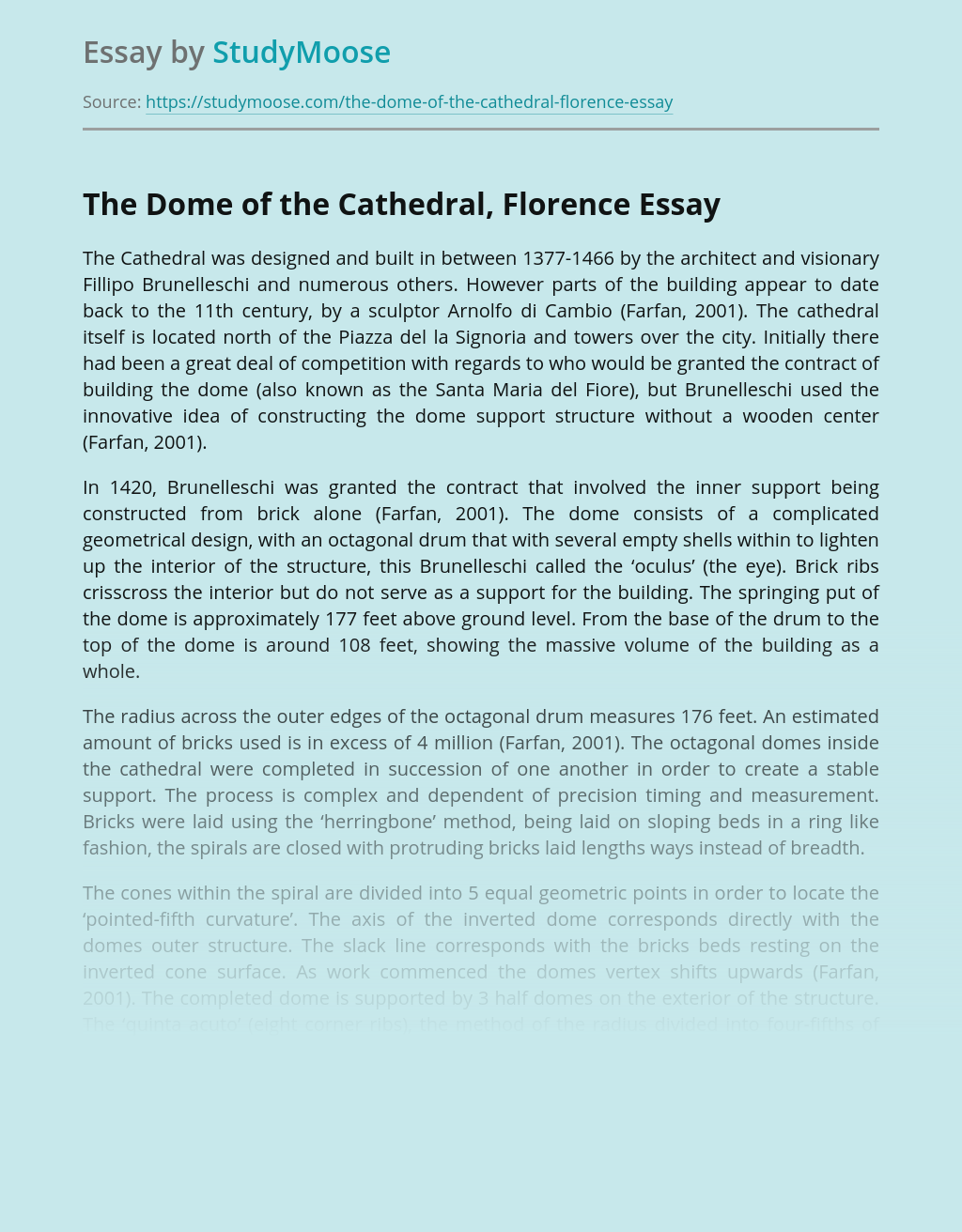