Dissociative Identity Disorder, formerly known as Multiple Personality Disorder has been the issue of strong philosophical scrutiny. Part of the reason for this is because it brings up the question of personal identity and whether there can be more than one person “inside” one body. “Various skeptics have argued that there is no such thing as multiple personality, or that it is in some way artificial or inauthentic” (Perring, 2010). Disbelievers generally maintain that DID is essentially a phenomenon where therapists or influential others suggest dissociative

Don't use plagiarized sources. Get your custom essay on
“ The Dissociative Identity Disorder Psychology ”
Get custom paper
NEW! smart matching with writer

Advocates, on the other hand, point out that no instances

of psychiatric induced DID have been documented in literature (Ross, 1989). They also believe that DID typically appear from severe childhood trauma on individuals who may be inclined to dissociation (Loewenstein, 1994). Society has fortunately conquered their former ignorance and now realizes that mental illness does exist. Although there still needs to be further research performed on the causes and treatments of all mental illnesses this is particularly true when it comes to Dissociative Identity Disorder.

Some cynics believe that Dissociative Identity Disorder (DID) does not exist at all, and is a deceptive practice by patients and therapists seeking attention, money, or to use it as an excuse for criminal behavior. Others claim that DID is not really a separate occurrence, but rather a different form of mental disorders such as Schizophrenia, Manic Depression, or Borderline Personality Disorder (BPD). These debates are on-going, and considerable controversy still surrounds the diagnosis of DID, however, it remains as a category in the American Psychiatric Association’s DSM-IV-TR.

Dissociative Identity Disorder (DID), is defined in the Diagnostic and Statistical Manual of Mental Disorders (4th ed.; American Psychiatric Association, 1994) as “the presence of two or more distinct identities. . . that recurrently take control of the person’s behavior. . .(and in which there is) an inability to recall important information that is too extensive to be explained by ordinary forgetting” (p. 484).

A person with Dissociative Identity Disorder presents as having the appearance of at least two distinct personalities within one person. “These personalities, or “alters,” can have profoundly different voices, speech patterns, self-descriptions, memories, character traits, beliefs, desires, and levels of education. Different alters within one body can describe themselves as being of different ages, genders, ethnicities, skin color, height, weight, and eye color” (Perring 2010). The different alters may not be aware of each other, however, one alter (A.) may be aware of alter (B.) without the other alter (B.) being aware of alter (A.) (one-dimensional).

(Putnam, Guroff, Silberman, Barban, & Post, 1986). The nature of historical memory in DID is particularly important in the perception of recent debates over the accuracy of traumatic memories. A recent study by Richard A. Bryant, (1995) investigated autobiographical memory in a patient, prior to and after her diagnosis with DID.

“This diagnosis was associated with increased recall of traumatic memories that were reported by a child personality. The child personality was able to recognize only half of the memories reported by the host personality. The patient’s responses were dissimilar to responses of control and non-experiment participants. These findings suggest that DID is associated with alterations in autobiographical memory and that memories differ across personalities” (Bryant, 1995).

In the book When Rabbit Howls, the patient presents with over 92 different personalities. The main identity, Truddi Chase, is buried deep within the other alters, and does not speak, she is a two year old that the book refers to as “sleeping”. The book itself is written by the other alters who are referred to as “The Troops”. What is interesting about Truddi’s story is that she was able to work, get married, and have a child despite her serious condition. Throughout her life there have been periods of amnesia, and the various alters all experience this amnesia. At one point in the book, Truddi’s alter “switches” to one named the Outrider and she refers to the switch as “Her mind shifted too, not a jarring motion, but like a car changing gears, smooth-except that she felt it strongly and wondered why it was happening” (The Troops for Truddi Chase, 1987).

One way to determine if DID is an actual psychological condition in itself is to determine if DID-diagnosed individuals exhibit a set of clinical features (i.e., psychiatric history and symptoms) and psychological practices that distinguish them from Non-Dissociative Identity Disorder (NDID) diagnosed individuals. Researchers have begun to recognize and quantify a set of clinical features that are shared by most DID patients (e.g., episodes of amnesia, alterations in identity, history of childhood trauma, sense of being controlled by an outside person, hearing of voices, (non psychotic) and have combined these characteristic features within structured diagnostic interviews that exhibit distinction and consideration (e.g., Ross, 1989; Steinberg, Cicchetti, Buchanan, Hall, & Rounsaville, 1993).

In a recent study by Drob, S., Eagle, P., Scroppo, J., & Weinberger, J., (1998), The DID participants reported a common set of clinical features that distinguished them from NDID psychiatric patients. “The DID participants also exhibited a distinctive and theoretically consistent set of perceptual and cognitive characteristics on the Rorschach test that at least partially differentiated them from both ND psychiatric control group and from the published norms for two closely related clinical groups (BPD and PTSD)” (Drob et al. 1998).

According to Drob, Eagle, Scroppo, and Weinberger (1998), DID is a controversial diagnosis, and there is reason to believe that genuine, distinctive, and theoretically consistent psychological processes underlie this disorder. Those individuals who suffer from the diagnosis of DID, have significant difficulties in emotion regulation, impulse control, interpersonal skills, developing skills and maintenance of safety from dangers to themself or others, numerous high-risk behaviors, as well as, controlling disturbing thoughts. In addition, the stigma attached to those diagnosed with this disorder in and of itself is undeniably devastating.

The reality of Dissociative Identity Disorder is clear and concise enough from the numerous studies that have been performed to justify its existence. The DSM TR IV recognizes it as a legitimate psychological disorder. There still may be those who would say that DID is not a legitimate mental illness, however, instead of trying to prove that it does not exist, their time and expertise, would better serve at preventing and curing this debilitating disorder. “Although DID is a controversial diagnosis, there is reason to believe that genuine, distinctive, and theoretically consonant psychological processes underlie this disorder” (Drob et al. 1998).

Although DID is a rare occurrence, The Three Faces of Eve, Sybil, and The minds of Billy Milligan are some of the most notable instances of Dissociative Identity Disorder. The diagnosis of DID is a serious and lifelong battle for those suffering from such a condition. For an identity to split into different personalities because of an extremely violent or traumatic experience, in and of itself shows the severity of this disorder. Fortunately there are those in the psychological field who specialize in this type of disorder and can offer assistance to those with Dissociative Identity Disorder. 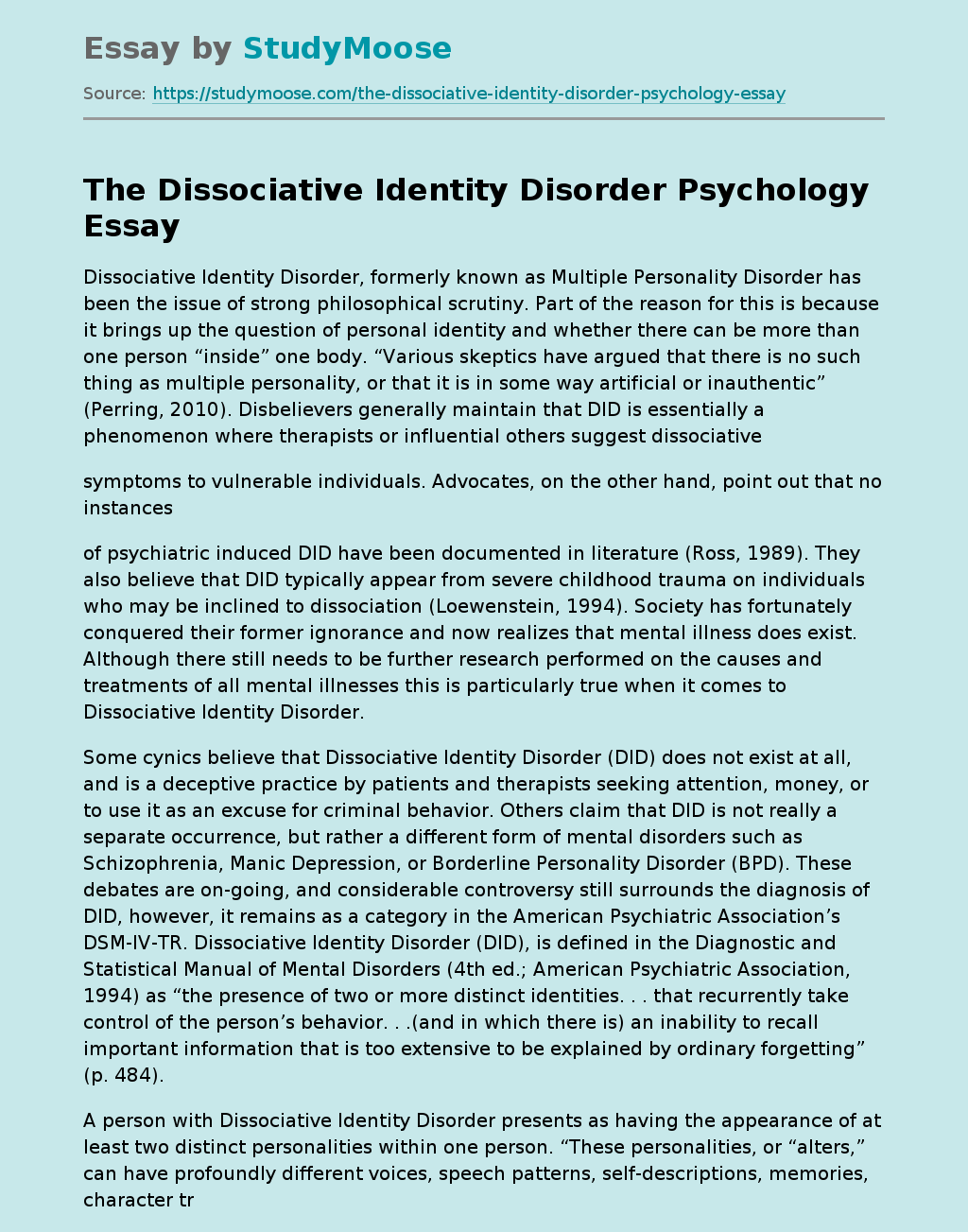