The Dilemma with Gun Control in College Campuses

In fact, some people can dispute that they are for it as well as being against it. Despite the positive criticism the public has to say about allowing weapons on campus. As for me, I believe that guns should not be allowed on college campuses because students are not mature by the time they begin college, and if they allowed guns on college campuses, they will be under the influence and can affect their learning environment. This can become a significant problem because that would mean that the students could be considered as victims and can get involved in a deadly situation.

Don't use plagiarized sources. Get your custom essay on
“ The Dilemma with Gun Control in College Campuses ”
Get custom paper
NEW! smart matching with writer

For example, if you lend a minor a deadly weapon, they can easily pull the trigger for unnecessary reasons without thinking the situation through and can cause an accident. Therefore, they cannot be trusted handling a firearm because of their low maturity levels.

More than one person can get injured due to not properly handling a firearm. Not only that, but it can put many students on campus in danger.

I do believe that people kill people, but if a gun is in the hands of an individual who has a license to possess it when their mind has bad intentions, can lead to destruction and chaos. I also believe that those individuals who carry dangerous firearms freely can cause them to pull the trigger because of their mentality and the dysfunctional conflicts that they may have at home. Most college students are not mature enough to hold a weapon.

It would be terrifying to know that someone is sitting next to me on campus that possesses a gun and having the thought of that person shooting the school. Not only would I feel uncomfortable but I wouldn’t be able to concentrate on my homework studies because I would be to busy stressing about this person carrying his gun on campus. Therefore, guns should not be allowed on college campuses because it would lead to an increase in brutal crimes across many communities around the world, distracting students from their learning environment, and lead to accidental discharge incidents.

We can make significant improvements in our society about gun control by coming together to confront the issue of the widespread of gun violence by teaching kids all around the world about the safety of gun violence and how we should be more aware of our surroundings. Applying the knowledge about how guns can be deadly can be one step into the making in our society. In conclusion, gun control has sparked a significant role in American society. Because of the second amendment people in the United States of America have the right to own guns to protect themselves and to feel safe. And also having to come from massive shooting outbreaks across America, leading to easier access to guns, which also leads to gun violence which has been the main issue to the public eye. Altogether, the unites states need to evaluate gun violence while also preserving the second amendment.

The Dilemma with Gun Control in College Campuses. (2020, Sep 05). Retrieved from https://studymoose.com/the-dilemma-with-gun-control-in-college-campuses-essay 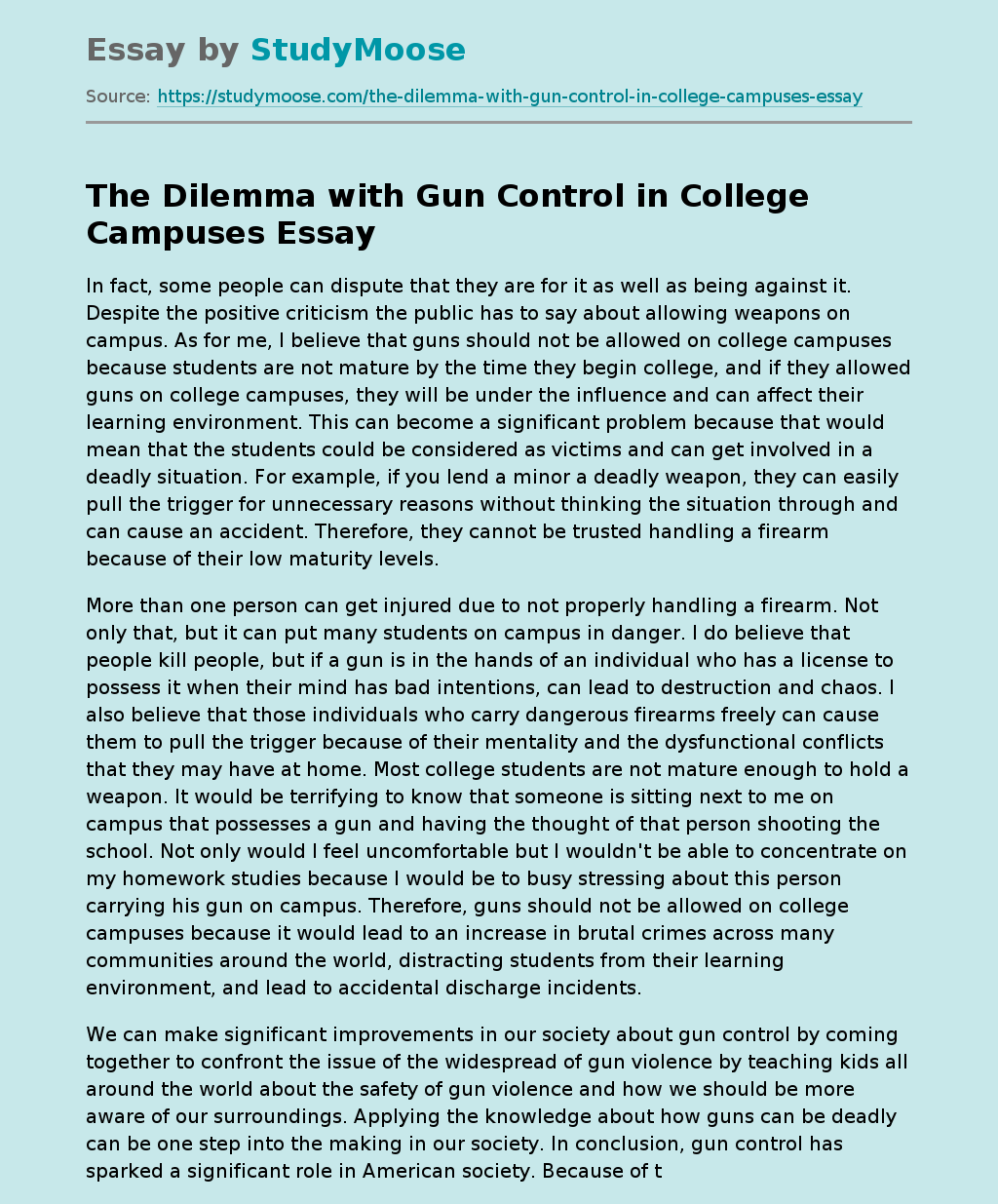