The Differences Between Chinese Food and Japanese Food Essay

There are lots and lots of differences. Keep in mind that China has at least 8 different cuisines so while the foods in northern coastal China have similarities such as the use of wasabi and lots of seafood, in the western part they use mostly lamb and eat noodles. Its hard to do a true comparison but I’ll try. – Raw vs cooked – Traditionally Chinese distinguished themselves from other cultures by saying they had mastered fire, and thus had quite a taboo on raw food for most of Chinese history.

Don't use plagiarized sources.
Get Your Custom Essay on The Differences Between Chinese Food and Japanese Food Just from $13,9/Page

Japanese clearly like raw foods. – Role of visual aesthetic – While both cultures care about color and appearance, Japanese will consider a dish good sometimes almost solely based on how visually pleasing it is. – Rice – Japanese rice is shorter grain and stickier. Northern Chinese rice is also short grain, but in general Chinese use longer less sticky grains. – Spice – China has some very spicy cuisines such as Sichuan and Hunan. There are few very spicy dishes in Japan.

– Influences – China was a huge part of Silk Road and had lots of influences from other countries.

There is still a lot of Muslim influence in many parts of Chinese cooking. Japan has incorporated more modern gourmet food from the West in recent history. – Tea – Japanese green tea tends to be steamed while Chinese green is often roasted in the production process so they have very different flavors sometimes. – Alcohol – Japanese sake tends to be less strong then Chinese rice wines. Chinese rice wines fill up the whole room with a strong odor and are as high as 90 proof.

The Differences Between Chinese Food and Japanese Food. (2017, Mar 25). Retrieved from https://studymoose.com/the-differences-between-chinese-food-and-japanese-food-essay 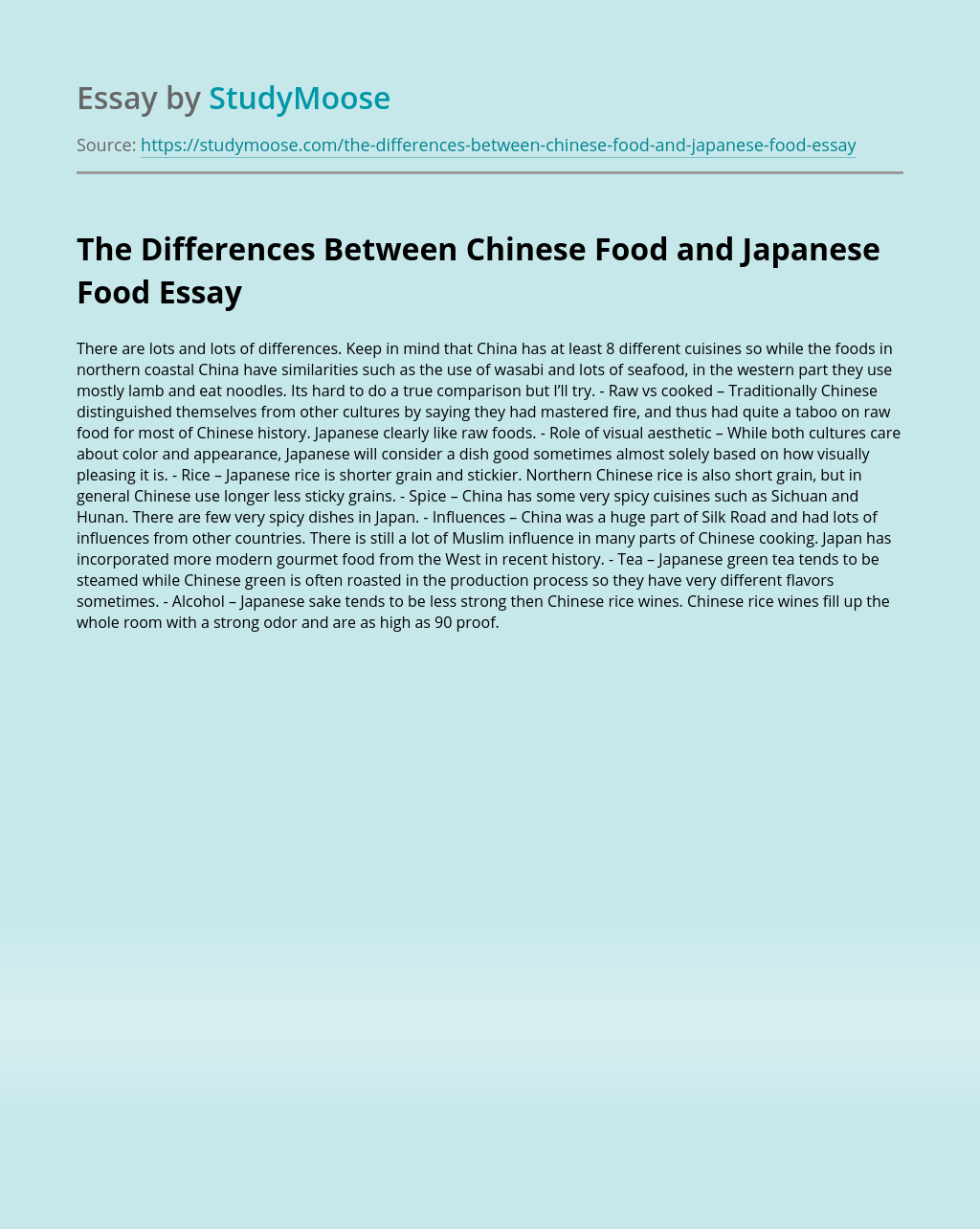 “Things Fall Apart” by Chinua Achebe describes tribal life in the jungles of Africa. Actually, the author speaks about Ibo community before the arrival of a white man. Achebe provides detailed overview of Ibo community interpreting their proverb and myths and analyzing the status and role of women in Ibo society and in pre-colonial Africa.... VIEW ESSAY

The chemical processes that take place inside food determine its nutritional value, taste, texture and freshness. Like any other organic material, food can decompose over a period of time. The importance of food chemistry lies in its ability to counter the effects of decomposition and spoilage and extend the shelf life of foods. Food chemistry... VIEW ESSAY

– The feminist art movement that officially began in the 1960’s- refers to the efforts and accomplishments of feminists who made art reflecting women’s lives and experiences. In doing so, it brought more visibility to female artists, and was a very influential political statement in itself. It was a movement that consisted of various artists... VIEW ESSAY

View sample
What Is Religion

Religion is a hard concept to comprehend. It is showing us a different side to look at our life. Instead of having hard facts that can be physically proven, religion shows us to take a leap of faith and believe the impossible. In The Nature of Existence Charles Messer says: “Religion is simply a system... VIEW ESSAY

Does racism and prejudice still exist today? Officially there is no racism in the United States in the sense that all kinds of racial discriminations are prohibited by law. But racism still exists to some extent in the hearts of the people. In general, there is a reduction in the prejudices people have about others... VIEW ESSAY