“The Devils Wife” is a poem written by Carol Ann Duffy. The poem is written in first person, past tense narrative, The poem is a dramatic monologue from Myra Hindly’s perspective of life in prison. the poem details Myra hindlys reflection on the crimes committed along with ian brady, known as the moors murders. Through the use of poetic techniques such as word choice, structure and imagery, Carol Ann Duffy creates a sinister atmosphere, the sinister atmosphere changes as the poem progresses and also as hindlys life progresses.

Don't use plagiarized sources. Get your custom essay on
“ “The Devils Wife” by Carol Ann Duffy ”
Get custom paper
NEW! smart matching with writer

the stucture of the poem is a dramamatic monologue written by Carol Ann Duffy, however we can not fully trust what the narrator is saying as it is not from Myra Hindly herself. the sinister atmosphere is created right from the opening of the poem. “The devil was one of the men at work” the word choice of “devil” shows that Ian Brady is evil and distrusting, “men at work” is a double entendre and shows the Brady was physically working with Hindly but also mentally working with her and manipulating her.

this creates unease with the reader as we see that there is something ominous and menacing about Ian Brady. “he entered me” this also has a double entendre and refers to Hindly and Bradys sexual relationship, which is also described as being violent, and also refers to the fact that she feels controlled by Brady, “he made me bury a doll” this shows that he was the instigator and she followed him.

when Carol Ann Duffy says “he made me” this makes the reader question whether or not she was involved in the murders or if she was only forced to hide the evidence.

The sinister atmosphere is developed further through the description of the evil acts taken place and also the sexual gratification between Hindly and Brady. the sexual acts are developed in a suspenced way, “i wont repeat what we did” again Duffy uses this as a double entendre to create dramatic impact, the reader is unsure whether she is referring to their intimacies or referring to the murders, or could she be referring to both? the sinister atmosphere is highlighted when Carol Ann Duffy makes a direct reference to one of the murders. “looking at playground, fairgrounds” Hindly and Brady would stalk places where children would be found and search for their next victim. this is extremely unsettling and chilling for the reader. Myra
Hindly was implicit in their murder scheme. “id walk around on my own. he tailed.” Myra Hindly is admitting her own guilt and is admitting that she was just as evil as Ian Brady. The description that Duffy writes about the vulgar things Hindly and Brady committed is what creates the sinister atmosphere and the very distressing feeling.

The atmosphere is continued to be sinister when we see the physical description of Myra Hindly. “tongue of stone” “two black slates for eyes” “thumped wound of a mouth.” this describes further the violence in Hindly and Bradys relationship. “tounge of stone” suggests to the reader that Brady is so controlling of Hindly and he doesnt allow her to speak, and perhaps she is beaten to be kept quiet. “two black slates for eyes” show she has black, evil eyes, she is emotionless and possibly she has fear of the child seeing her. “thumped wound of a mouth” this also indicates that Hindly was beaten by Brady to be kept quiet. the title of verse two “medusa” links back to Hindlys “slates for eyes” and it also links forward to the description of her “medusa stare” the literal meaning of ‘medusa’ is an evil woman who turns people to stone with her evil eyes, Carol Ann Duffy is suggesting throughout the poem that Hindly is the same as Medusa, she also shows that Myra Hindly views herself as a monster in just the same way as the public does.

The control that Brady has over Hindly is a major theme in the poem. “no body liked my hair. no body liked how i spoke” “i didn’t care” this shows that Myra Hindly changed herself to attract Ian Brady and he is most likely forcing her to change. Hindly still has a strong obsession with him “i wrote him every day” “id lie on my bed, on fire for him” despite the evil, vile things Brady did, Hindly still wanted to be part of his sinister world and she fantasised about him. could this be because he had so much control over her she doesn’t know what do without him? Despite the fact that Hindly is serving a life sentence in prison for her crimes she still shows no remorse. “i howled in my cell” Hindly is not howling because of the guilt of what she did, she is howling because she cant be with him.

Carol Ann Duffys use of word choice, structure and imagery, creates a sinister atmosphere is created throughout the poem of “the devils wife”. The reader is left with a chilling, dark feeling. 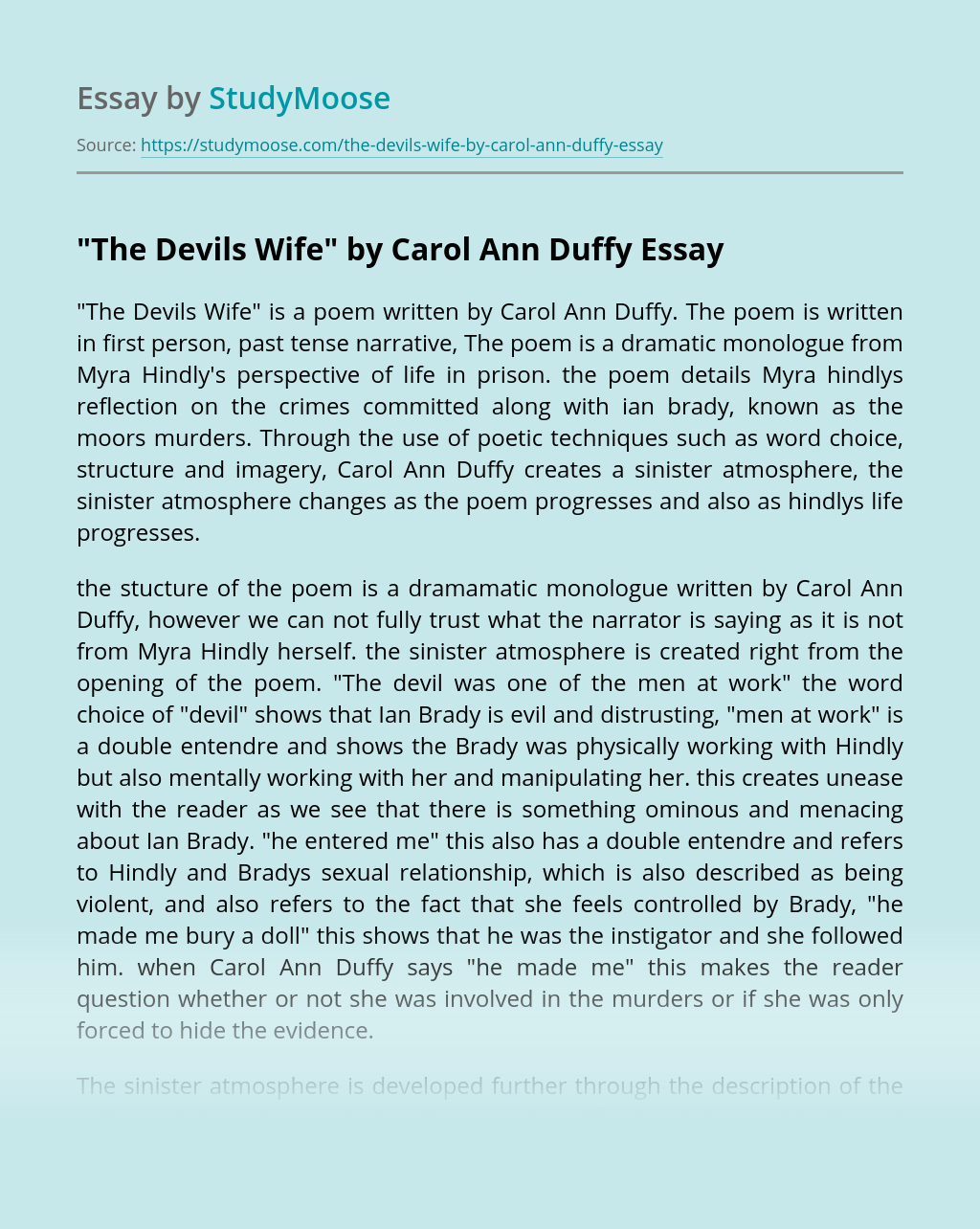