People should not be afraid of their government. Governments should be afraid of their people. The right to rule. What gives someone such a power you ask? Well there is a variety of different factors and qualities one must have such as strength and leadership but there is a single item that all need and that is control. Without the obedience and submission of the people governments will fail. The film “V for Vendetta” and the novel “Brave New World” both comment on the issue of misuse of technology and the control of the people.

Don't use plagiarized sources. Get your custom essay on
“ Authoritarian Methods of Control in Brave New World & V for Vendetta ”
Get custom paper
NEW! smart matching with writer

V for Vendetta is the 2006 film adaptation by the Wachowski’s of the comic book of the same name created by Alan Moore. It is set in a futuristic dystopian world in which Britain is ruled by a totalitarian-fascist party, and follows the events triggered by a masked shadowy revolutionary known only as the letter V. Brave New World is Aldous Huxley’s controversial masterpiece, published in 1932 and is about a futuristic-dystopian world where the government has outlawed free-speech and individuality and uses psychological conditioning to control the people.

Now let me refocus on the theme at hand: control. The Norsefire party in V for Vendetta rises to power by offering the solution after a string of biological attacks on various establishments: a school, water plant and an underground train station. The fear inspired by these attacks was what made people give them the power to rule. The Wachowski’s have compared and likened the Norsefire party to the Nazi’s the world’s most famous fascist regime.

The symbol of the Norsefire uses the same colours and a similar symbol to that of the traditional swastika. The Norsefire also had a similar rise to power as the Hitler regime. First Chancellor Sattler was seen as the saviour before revealing his true colours as a villain “fear became the tool of this government”. The Norsefire also engaged in genocide of homosexuals, Muslims, and ethnics. Rather than concentration camps those captured were placed in detention centres with the aim of testing biochemical and viruses. The Norsefire government represents what V is rebelling against and that is oppression and the abuse of power.

Similarly in Brave New World, the World State is built upon from the devastation of the Nine Year War, fear and confusion were the aid of both these governments and let them create and enforce their ideals. Both governments have destroyed and banned any material that goes against party policy. Brave New World has taken this to the extreme with all literature and arts having been destroyed since the beginning of the World State. The tool of control used by the World State is science, children are born from laboratories and are conditioned, and their lives are predetermined to create a unified machine. The motto of the World State accurately reflects this ideology “Community, Identity, Stability”; it calls for each class to identify within their ranking and to support the community with the aim of achieving stability. Characters like John and Valorie rebel and detest the notion of conformity.

John wishes to experience the world as it truly was meant to be “But I don’t want comfort. I want God, I want poetry, I want real danger, I want freedom, I want goodness. I want sin.” He hates the protected and sheltered state of the people of the world state and their dependency on soma. “Valorie is proud of being a lesbian and was captured because of it throughout her time at the detention centre she continues to fight whilst trying to stay true to herself and her identity. She leaves a note which becomes a source of inspiration for both V and Evey as she says “it was my integrity that was important…we must never lose it, or sell it, or give it away. We must never let them take it from us”. By using the number of his room at the Larkhill detention centre V becomes a living symbol of Norsefire’s genocide and a motive for his vendetta beyond V’s rebellious goals, he also wishes to remind the people of Valerie’s message about their identity, their integrity and that they have the freedom to be themselves, no matter what anyone tells them they can or can’t be. 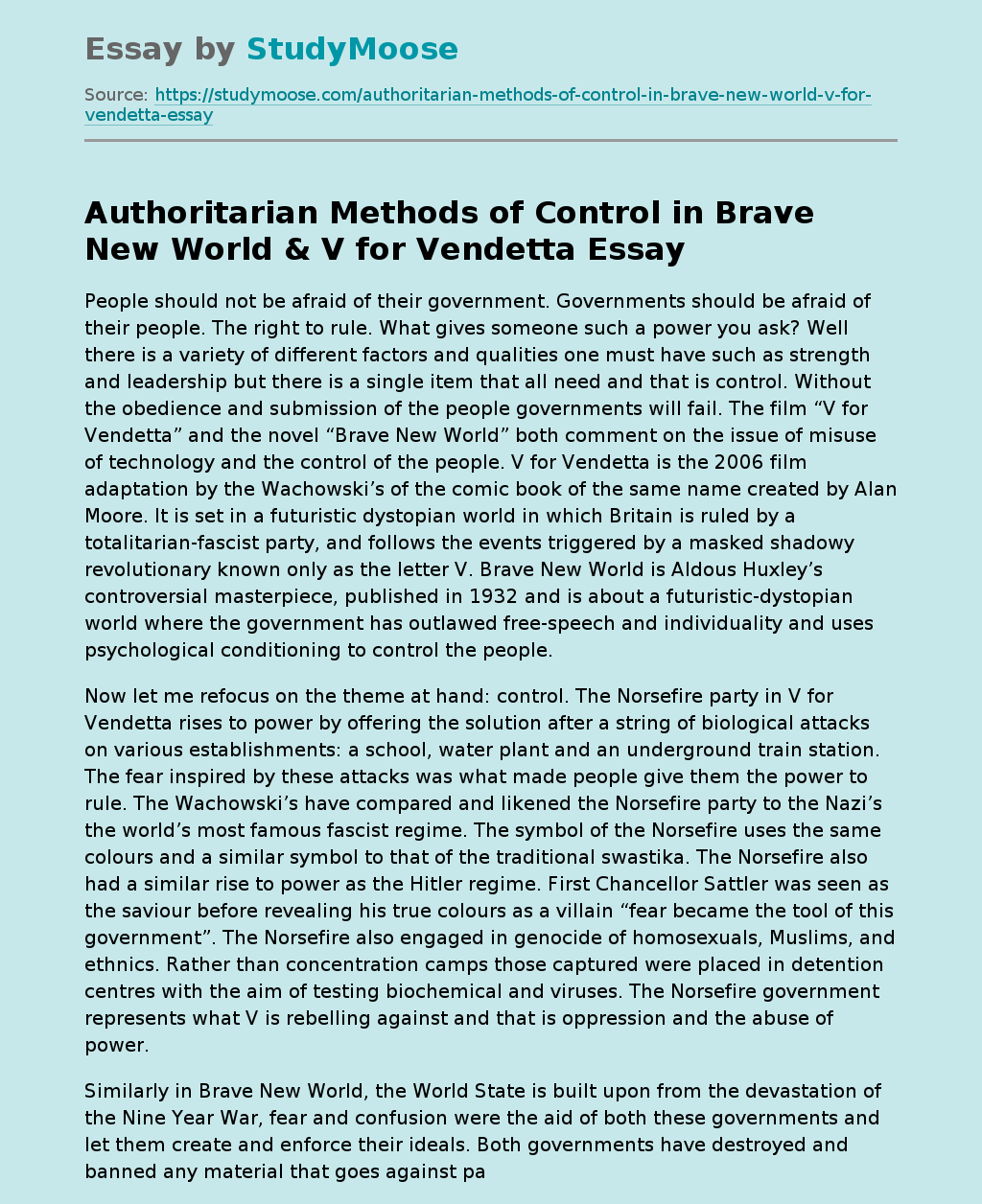