The Danger in Knowledge, Imagination, and Humankind

In Nathaniel Hawthorne’s “Rappaccini’s Daughter” (1844), the Transcendentalists exhibits the danger in creating a false reality, especially in relationships, which can ultimately lead to self-destruct when interfered with doubt. Thus, the author cautions readers from overreaching imagination which can often be tampered with by our conscience. Giovanni Guasconti, a young man who came from Italy to pursue his studies in University, wavers whether Beatrice is good or evil continuously throughout the book. His imagination wants her to be good, and urges him to love her, while his rational mind is filled with many doubts.

Don't use plagiarized sources. Get your custom essay on
“ The Danger in Knowledge, Imagination, and Humankind ”
Get custom paper
NEW! smart matching with writer

Transition word, our imagination counteracts our conscience, as it fills our mind with what we want, instead of what is real. Giovanni becomes obsessed with her “life, health, and energy; all of which attributes were bound down and compressed […] in their luxuriance, by her virgin zone,” (Hawthorne, “RD” #). His obsession grew stronger when “he was struck by its expression of simplicity and sweetness” (“RD” #). Similarly, in one’s imagination, Rappaccini and his daughter seem to have a mutually loving relationship.

Giacomo Rappaccini, “‘would sacrifice human life, his own among the rest, or whatever else was dearest to him, for the sake of adding so much as a grain of mustard-seed to the great heap of his accumulated knowledge. ”’ (Hawthorne, “RD” #), emphasizing the danger in knowledge. In fact, that the aggressive pursuit of knowledge cause an individual to lose all sense of humanity. Once one hits their capacity of knowledge, it is what they desire to do with it that can turn that knowledge into a negative. Dr. Giacomo Rappaccini is engaged solely in reaching the highest level of knowledge, that he is blinded from his monstrous acts. With all the knowledge he has retained, Rappaccini feels as powerful as God. This feeling of omniscience begins to slowly distort his humanity. Rappaccini uses his daughter, Beatrice as a science experiment to pursue this knowledge even further. Beatrice said, “feebly–and still, as she spoke, she kept her hand upon her heart” … “‘wherefore didst thou inflict this miserable doom upon thy child,’” (“RD” #), and Rappaccini explains utterly confused, ‘“Miserable! […] [w]hat mean you, foolish girl? Dost thou deem it misery to be endowed with marvellous gifts, against which no power nor strength could avail an enemy,’” (“RD” #).

Rappaccini refers to misery as a “marvellous gift” (“RD” #), which in itself is completely inhuman for someone to say. Rappaccini, whom is described as a “true man of science” (“RD” #), life’s work is an experiment on plants, which are said to produce “medicines that are as potent as charm” (“RD” #). However, his plant based potions are also rumored to have sinister effects, and Rappaccini himself is said to have perversed motives. Moreover, in “The Minister’s Black Veil” (1832), knowledge of the truth may not be dangerous in that it leads to a loss of humanity, but instead can lead to personal suffering. For instance, because Reverend Hooper recognizes “[s]trange and bewildered looks” (Hawthorne, “TMBV” #), his ignorant contemporaries cirique him to have “‘changed himself into something awful”’ (“TMBV” 2), solely because of a “simple black veil” (“TMBV” 4), isolating him to his suffering. Ultimately, the Transcendentalist unveils the truth about dangerous assumption and judgements people too often make about others. All in all, however, Nathaniel Hawthorne assures the readers that ‘“on every visage a Black Veil” (“TMBV” 13), uncovering that all humans are imperfect, even if they cannot always see the truth manifested. Before people judge, assure scandal, and presume the worst about others, they must first self examine and take off the veils on their own visage.

Consequently, in examining Nathaniel Hawthorne’s various portrayals of human mind, readers recognize that when society is exposed to something unfamiliar, such as “a simple black veil” in, they turn to judgment because they fear change. Nathaniel Hawthorne emphasizes, through the themes of gossip, rumor, and reputation, a telling moral from his later story, “Young Goodman Brown” (1835): that “[e]vil is the nature of mankind” in all aspect of human life (Hawthorne, “YGB” 10). Ultimately, the Transcendentalist unveils the truth about dangerous assumptions and judgments people too often make about others. In “The Minister’s Black Veil” (1832), although Reverend Hooper altered his appearances, everything else about him remained the same. His sermons remain the exact sermon, however, because of an object “swathed about his forehead” (“MVB” 2), they begin to perceive his sermons differently; much darker.

A simple piece of clothing changes their perception of a man they have known for years. Not only this, but Hooper’s change in appearance leads the towns people to create false interpretations of why he chooses to wear the veil. Without knowing what lies beneath the veil, townspeople assume ‘“[h]e has changed himself into something awful, only by hiding his face’” (2). However, Hawthorne unfolds the mystery that a secret sin lies beneath the veil, a sin, ironically unveiling the evil aspects of human nature. Consequently, the transcendentalist hypothesizes that all humans are imperfect and prone to sin. All in all, Nathaniel Hawthorne assures readers that “‘on every visage a Black Veil” (“MVB” 13), uncovering that all humans are imperfect, even if they cannot always see the truth manifested. Before people judge, assure scandal, and presume the worst about others, they must first self-examine and tear the blinders from their own eyes.

The Danger in Knowledge, Imagination, and Humankind. (2021, Sep 14). Retrieved from https://studymoose.com/the-danger-in-knowledge-imagination-and-humankind-essay 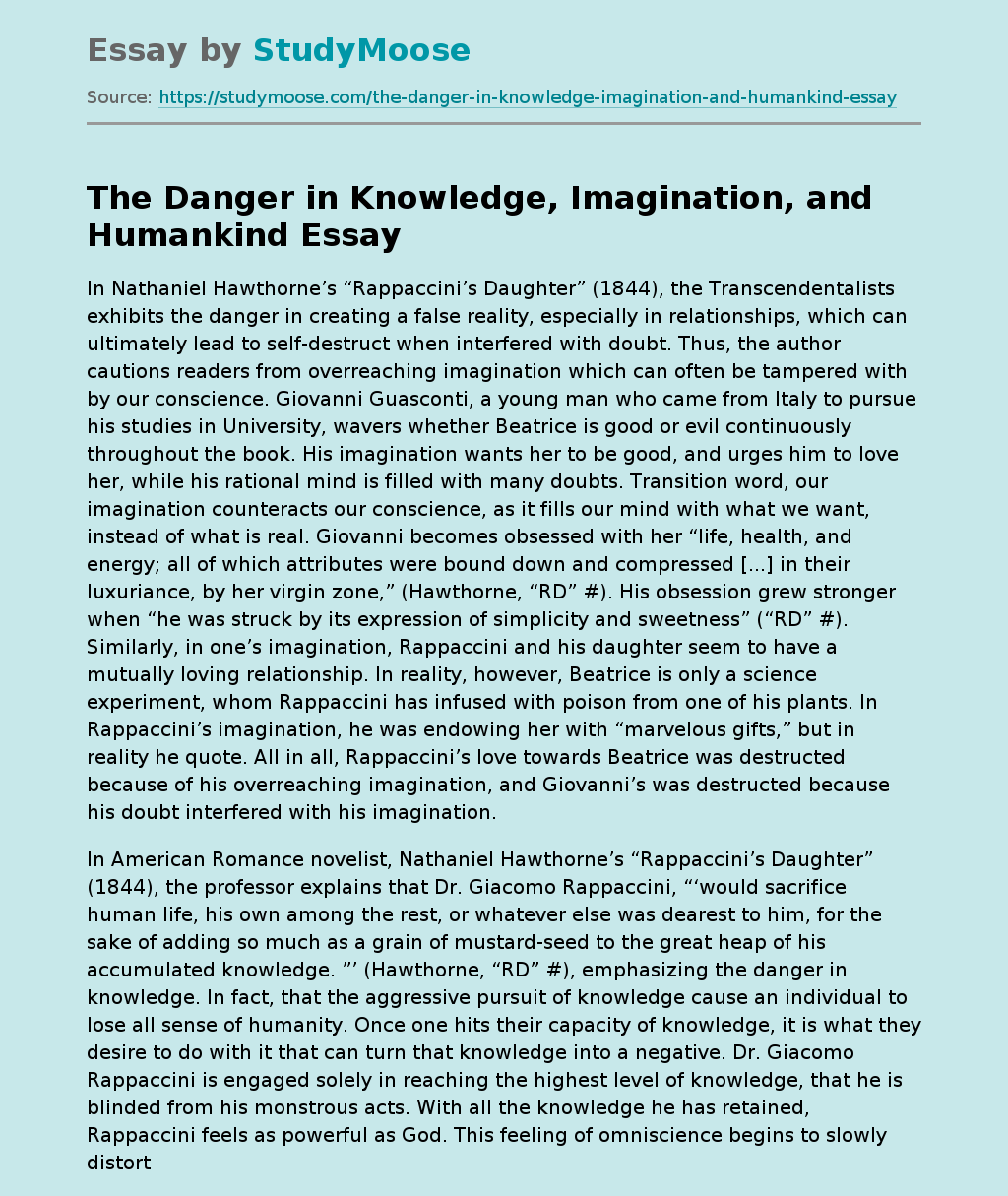