The Cultural Context of the Proto Renaissance Period

The period before the Renaissance period, also known as the Proto-Renaissance happened in the northern Italy, under a relatively stable political structure in the 12th century. This event was very crucial: the place where it happened, the thinking of the people who existed at this period, and how it transformed into the Renaissance period. In terms of the socio-political events, the Feudal structure of the government was diminishing, unlike anywhere else in Europe, which involves well-defined boundaries not under the danger of invasion or attack.

Don't use plagiarized sources. Get your custom essay on
“ The Cultural Context of the Proto Renaissance Period ”
Get custom paper
NEW! smart matching with writer

For the economic sphere, the trade flourished all throughout the region, where there is a prospering economy for a more contended population. Also, a huge number of merchant families who “ruled” these Republican places were in a competition, out-doing each other to impress foreign investors towards trade. This is considered to be dominant activity. For example was Florence where importation of wool and finished cloth making was rampant, and are incorporated in the international trade.

This made the northern Europe a powerful in terms of control of the territories in their immediate boundaries, the Italian cities extended much of their powers beyond their walls.

This nature of the northern cities made them urban principalities or city-states. The despots ruled much of the northern Italian cities. These despots were creative enough to satisfy the majority of the populace instead of dwelling on being despotic to their political opponents.

Because of this, the defense of this European country was strengthened, with the internal security and taxation procedures improved (Essak, 2008).

The proto-Renaissance period had been a period of great economic and political shift in Europe. Since Italy flourished that time, many foreigners were enticed to the trade possibilities even of other European countries. Aside from the socio-political and the economic improvements, art, religion and some other crucial fields were tackled, because all of these have connections as dictated by the economic status of a place.

The Cultural Context of the Proto Renaissance Period. (2016, Nov 06). Retrieved from https://studymoose.com/the-cultural-context-of-the-proto-renaissance-period-essay 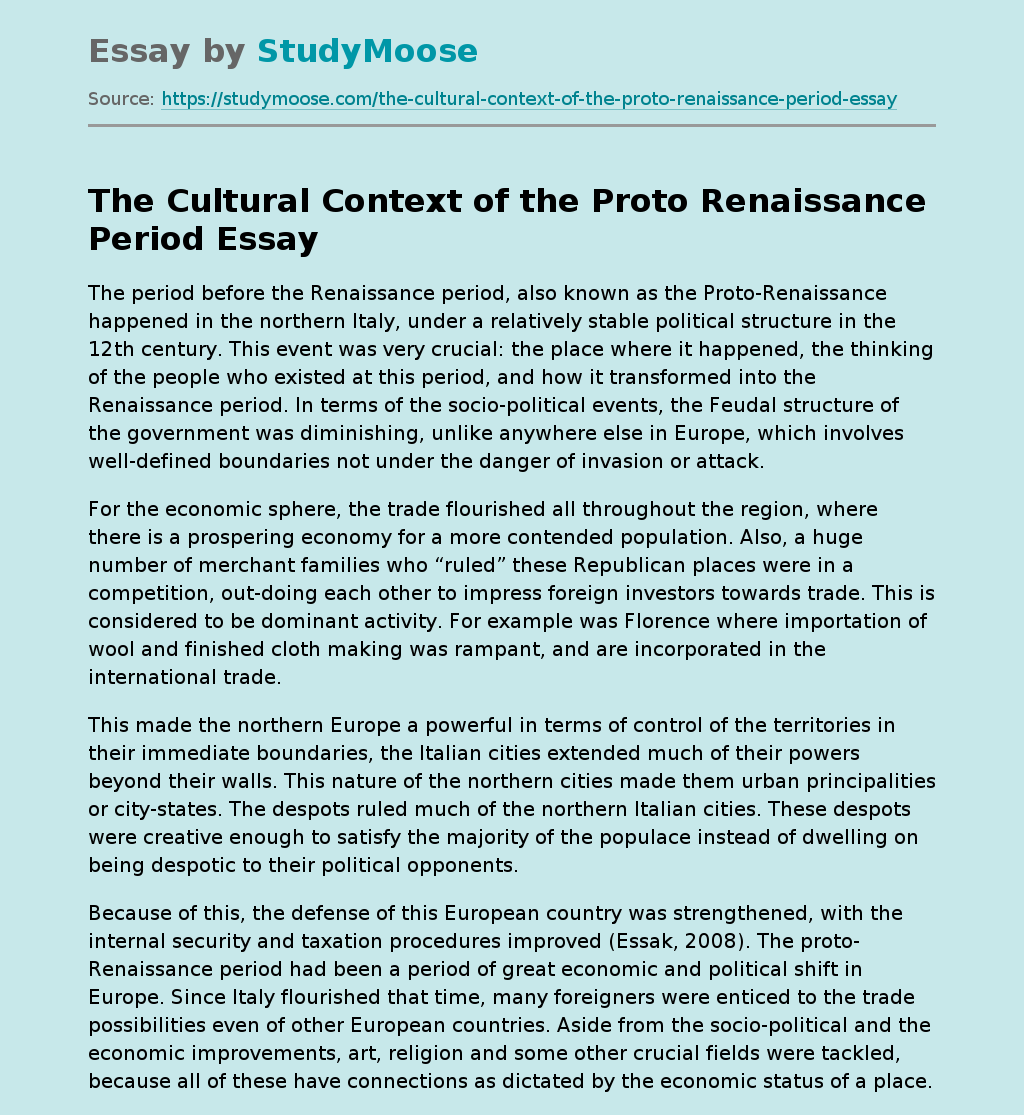