Who knew that a gang founded by a fifteen-year old would become one of the largest and most violent gangs in the United States? The Crips started as an individual gang in the late 1960s. By the late 1990s, there were 200 Crip gangs in California. The popularity of Crip gangs increased dramatically, outnumbering non-Crip gangs by three to one. There were sparking disputes with non-Crip gangs. This led to the alliance of rival gangs which was known as the Bloods. Eventually, the Crips became the most powerful gang in California.

Don't use plagiarized sources. Get your custom essay on
“ The Crips Gang ”
Get custom paper
NEW! smart matching with writer

The Crips are mainly composed of African-American ethnicity. It was founded in Los Angeles in 1969 by fifteen year old Raymond Washington. The gang was originally known as the Avenue Cribs to represent a new generation of youths. Washington was inspired by the revolutionary ideology of the 1960s. He assembled friends and wanted to act as community leaders by aggressively protecting local neighborhoods.

The revolutionary vision did not last due to immaturity and lack of leadership, and the gang was not able to apply its vision of neighborhood protection into a broader protective strategy.

The Crips became obsessed with protecting themselves from other gangs, as they were often in conflict with other non-Crip gangs, and they became increasingly violent as they attempted to expand their territory. By the early 1980s, the gang was heavily involved in the drug trade; the majority was crack cocaine. They are also involved in attempted murders, assaults, rapes, robberies, thefts, drug distribution and obstruction of justice by threatening witnesses.

The Crips expanded its network of crime into high schools across the country. Gang leaders recruited young girls as prostitutes.

They maintained allegiance through beatings, threats, assaults, and endless supply of drugs. Most girls, usually fifteen or sixteen years old, are reluctant to report their procurers after violent and frequent beatings and threats. A girl was choked, cut by a knife and threatened with additional violence when she refused to use cocaine and no longer wanted to participate in the prostitution. Five gang leaders were arrested named on charges of underage sex trafficking, and if convicted, each would face life imprisonment. Although the Crips used to be a single gang, it is now a loosely connected network of individual sets.

Criminal acts are often directed by individual leaders; it is not the result of a hierarchical decision making process. Crips is an identity that many gangs associate themselves with. They have the reputation of being extremely violent, and they are required to commit violent acts to obtain their gang membership. It is difficult to believe that Raymond Washington would create one of the largest street gangs in the United States. Most members of the Crips, like Raymond Washington, were troubled youths. They desired personal recognition. The media publicized the Crip gangs’ criminal activity which gave members a sense of real power. It is ironic because there was a good intention for starting the gang, such as protecting local neighborhoods. In the end, the Crips are harming the neighborhoods that they once wanted to protect. 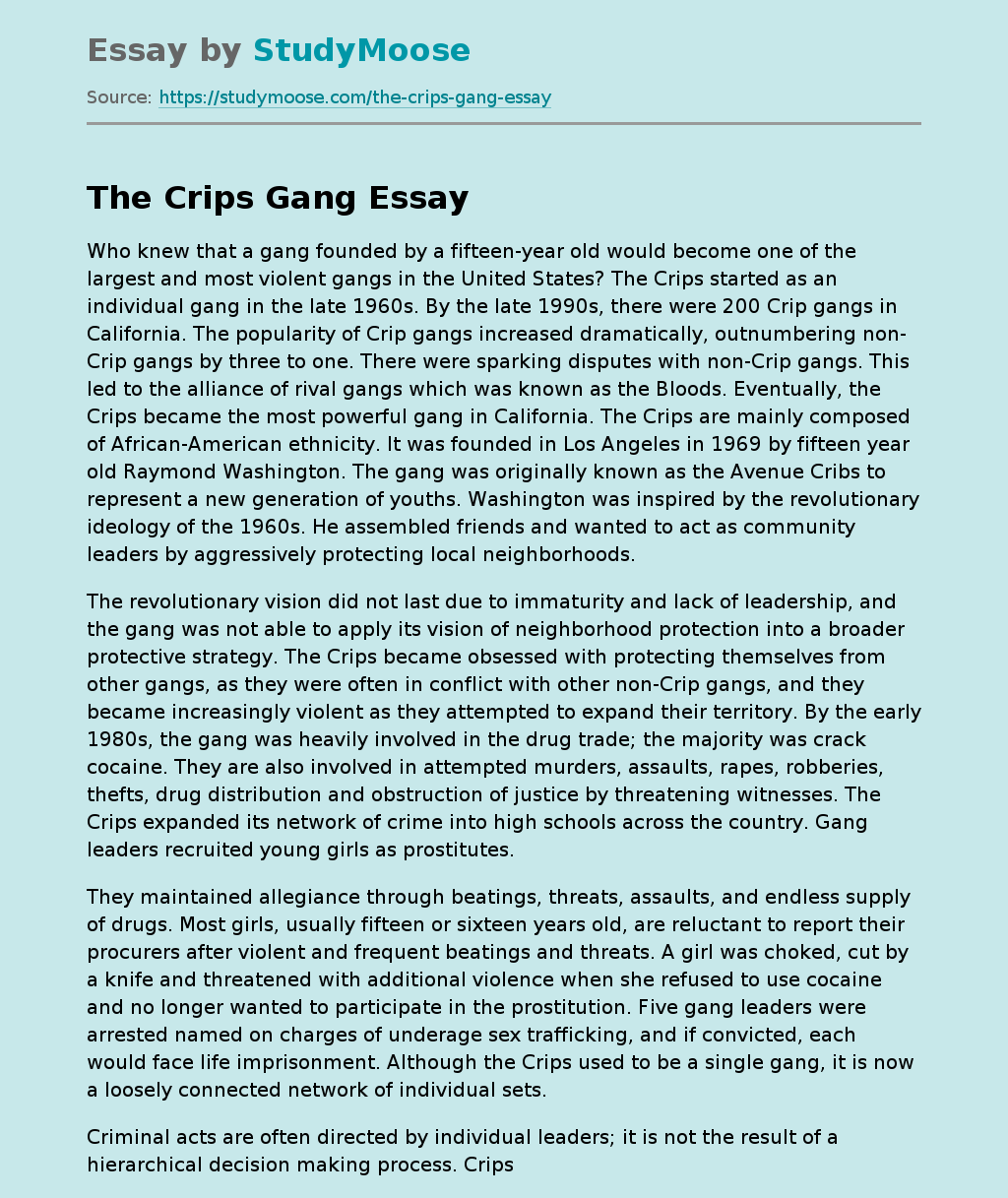