In this day and age, the conversation about mental health is growing. What once was an extreme taboo is now getting more and more light shined upon. For years, those with mental illness lived with the fear of their struggles not being understood by the general public; consequently, the stigma around mental health grew as a result of a lack of understanding. Post-traumatic stress disorder (PTSD), noted by the authors of “PTSD Prevalence, Associated Exposures, and Functional Health Outcomes in a Large, Population-Based Military Cohort.

Don't use plagiarized sources. Get your custom essay on
“ The Concept of Post-Traumatic Stress Disorder (PTSD) ”
Get custom paper
NEW! smart matching with writer

” is a type of mental illness results from experiencing or witnessing traumatic, life-threatening events including combat-related experiences (Smith, Tyler.C et al. 4). In the early 1900s, the concept of PTSD was not taken as seriously as it is today. Today, the causes, symptoms, and treatments are being outlined as an important matter since this trauma affects the daily lives of numerous individuals. Some of the symptoms of PTSD are: nightmares, avoiding people, difficulty sleeping, and being easily startled (Pittman, James et al 4).

In “The Red Convertible,” Louise Erdrich uses her writing to showcase the Native American experience with Post-Traumatic Stress Disorder after the Vietnam War. The author uses sharp contrasts between Henry’s pre- and post-war narratives to convey the magnitude and effects of post-war trauma.

Henry’s shift from a young man enjoying summertime to a battered veteran represents his approach to the outside world shifts. When the story begins, Henry is shown to be an adventurous person. Before he is drafted, he “[takes] off driving all one whole summer” with Lyman after buying the red convertible.

As Lyman recalls, the brothers “just lived [there] everyday lives from here to there,” taking the car far and wide to see new sights. Henry’s willingness to spend the entire summer driving around to new places reflects a sense of adventure before going to war.

The adventurous character introduced at the beginning of the story fades after Henry returns from Vietnam; because of his PTSD, Henry grows detached from the outside world. Lyman notes that it was “easier for him to do the things the rest of us did,” such as eating without distraction and without looking out the window. This reclusiveness paints a new image of Henry: he keeps to himself and does not connect to anything outside of what he is doing, a symptom of PTSD. This transformation is further highlighted when the reader sees Henry’s anxious reaction to the color TV. Watching on the color set, “[Henry] was not easy,” gripping the armrests tightly and, in one instance, biting through his lip until “blood was going down his chin”. This reaction indicates how troubling it is now for Henry to be immersed in another place. In this instance, it is revealed as Henry is immersed in the color television since its pictures are more vivid as opposed to far-away black-and-white. According to an article by Healthy Place, it is said that “change often incites fear in PTSD” and this is evident with Henry as he is no longer comfortable being able to accept new change. The contrast in his approaches to the outside world shows the gravity of his mental struggle by showing how being traumatized by something can change your entire outlook on it. Henry had enjoyed seeing new places, but when he went to Vietnam, a new place and suffered, he could no longer have the same disposition when faced with the outside world.

Another substantial change in Henry is present when he comes home from Vietnam: his personality is different. The reader first meets Henry as a playful and lighthearted young man. However, after Henry returns, there is a stark contrast in his personality compared to when he was in Alaska. While in Alaska, Henry “always had a joke,” upon returning from war, one “couldn’t get him to laugh”. The difference in Henry’s temperament is made quite clear. There is no mistaking Henry’s new attitude; as stated by Lyman, “It was a fact: [he] was jumpy and mean”. Henry goes from a fun-loving young man to a serious veteran who is unable to enjoy life like he used to. This change in his personality conveys to the reader that Henry’s PTSD has affected him to his innermost self, draining his fun-loving attitude and stifling his ability to see positive things.

Moreover, the red convertible symbolizes the development of Henry’s mental struggle. The convertible becomes a narrative device that illustrates Henry’s mental state as it too transforms post-war. The car “reposed, calm and gleaming” when first introduced in the story. Like the car, Henry is calm and peaceful with his life at that time before the war, as shown when the brothers rest under a willow tree. When the brothers take a break between driving, Lyman recalls Henry “asleep with his arms thrown wide”. He, too, is reposing. The open-arms position he rests in represents being open to a great array of things, just like his inclination for adventure and having fun. The sturdiness of the car despite a summer of road trips may be compared to Henry’s mental resilience. Traveling around all summer has emphasized Henry’s carefreeness and steady mental state, which lasts all summer long.

The red convertible’s journey after Henry’s come back reveals his struggle with PTSD and ultimate demise. When Henry first returns, he doesn’t look at the car at all. It is until Lyman damages the car, recalling how he “whacked it up” until “it looked worse than any . . . car that has been driven.” that Henry notices it. It seems as if Henry recognizes the beat-up convertible as a reflection of himself. He tries to fix the car, working day and night and “going off to get parts for it”. This represents Henry trying to fix his mental state, and it seems as if he has recovered when he takes the fixed car for a drive with Lyman. While this hearkens back to the old version of Henry who had fun driving around with Lyman, it does not last. Ultimately, his PTSD grips him once again. Lyman tells the reader how Henry’s face became “totally white and hard,” breaking “like stones break all of a sudden when water boils up inside them”.

The interaction between the brothers by the river, reveals the nature of Henry’s mental state. Mental illness manifests itself persistently. Those with mental illnesses must learn to cope with symptoms, episodes, and other difficulties that come and go as time goes by. Without any treatment, Henry feels that he is powerless against his struggle. “I can’t help it,” he says after the weight of his pain comes back to haunt him. It is made clear that he sees no end to it when he continues on, saying, “it’s no use”. Ultimately, Henry take his own life by jumping into the river. The old Henry that the car had originally represented dies, and Lyman fittingly pushes the convertible into the river with him. The symbolism of the convertible gives the reader an additional glimpse into Henry’s mental state. Through the narrative of the car, Henry’s mental resilience is shown, along with how this resilience chips away in response to his PTSD.

The changes in Henry’s connection with the world, his personality, and mental resilience suggest the weight that PTSD can have on a person’s mental health due to a lack of resources. Emphasized in “The Red Convertible” through sharp contrasts between Henry’s narratives before and after the war, the magnitude of the trauma’s effects on Henry also reflect the struggles of real-life individuals with Post-Traumatic Stress Disorder. Due to the lack of resources and care available during the time this story was written, costed Henry his life. Fortunately, in today’s world there are enough resources to help provide aid for those experiencing such traumas. 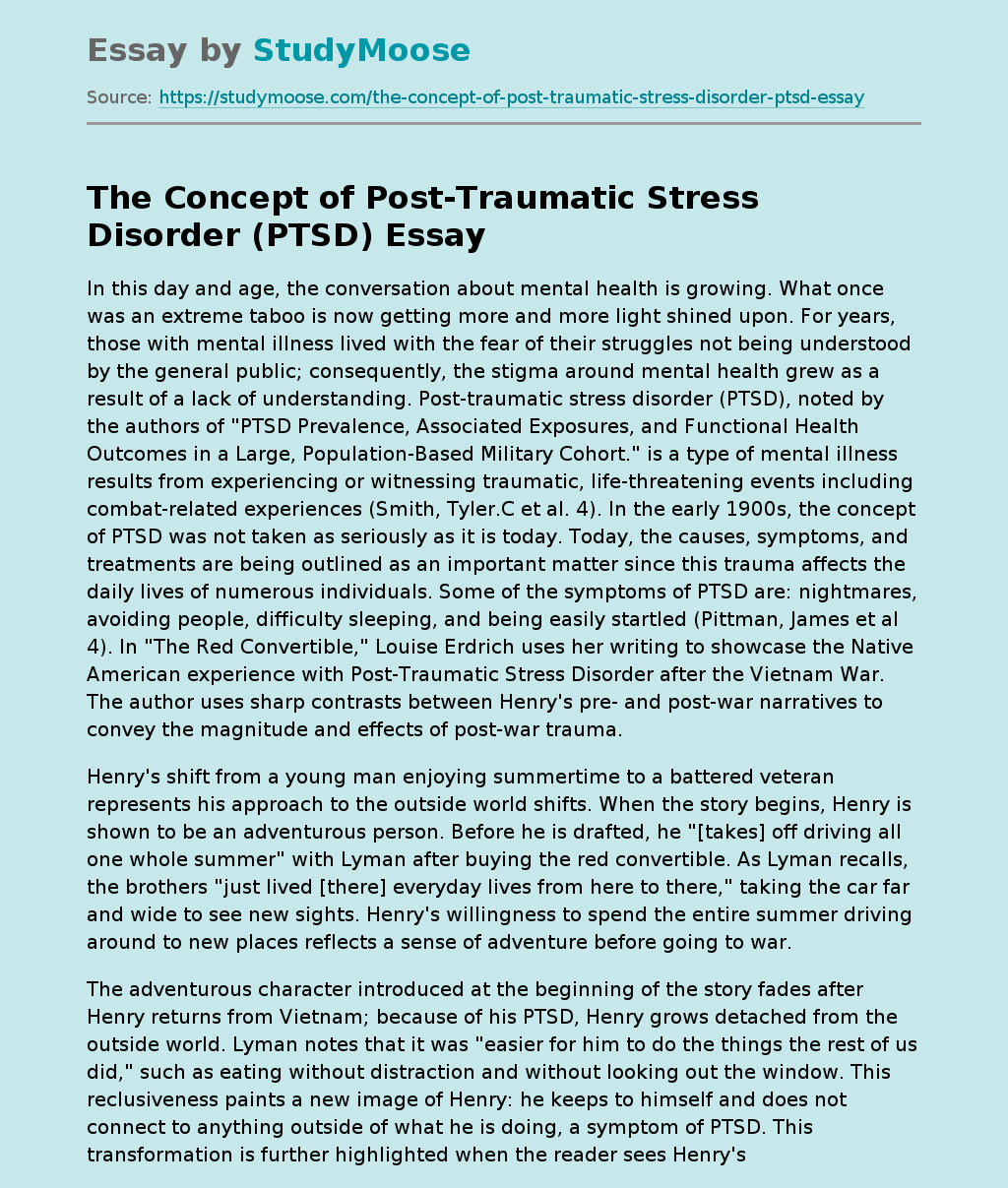