Posttraumatic Stress Disorder in The Things They Carried

An individual is diagnosed with PTSD based on the American Psychiatric Association’s DSM-IV & DSM-IV-TR definitions. Diagnosis of PTSD  is given if an individual shows the following symptoms for a period of more than one month.

Don’t waste time
Get a verified writer to help you with Posttraumatic Stress Disorder in The Things They Carried
Hire verified writer
$35.80 for a 2-page paper

This may also include feelings of being estranged from other people in the individuals’ surroundings. Third, the individual experiences a heightened sense of arousal thus probably causing sleeplessness, sudden bursts of emotion, hyper vigilance, and the like.

And lastly, the individual find himself or herself unable to properly function in certain aspects of his or her life perhaps at work, at home, or in other social environments. The severity of the PTSD, whether acute or chronic, is assessed based on how long the given symptoms persist in the individual.

An event which has come to be heavily associated with PTSD is war. A great number of literary pieces have been dedicated to this event and one such work is Tim O’Brien’s The Things They Carried.

PTSD in relation to war is clearly seen in the different collections of stories compiled and written by Tim O’Brien in his book.

One particular story found in the book that shows PTSD in the case of a war veteran is “Speaking of Courage”. The main character in this particular story is Norman Bowker. Symptoms of PTSD are clearly seen in his actions. Bowker is unmotivated, experiences confusion and mental chaos, feels estranged and isolated from others in his town and is also unable to obtain work.

Social inhibitions that plague this character, which are clear signs of PTSD, are exemplified in his inability to properly order in a drive-thru restaurant. Instead of speaking through the intercom, he honks his horn at the waitress until he gets his order. He then proceeds to eat his food without moving his car and leaves only upon finishing his meal. (Examples of Post Traumatic Stress Disorder in The Things They Carried; Tim O’Brien’s – The Things They Carried Eating Them Away)

Bowker relives and is unable to move past the events of the war. He lives in a constant state of guilt because of his inability to prevent the death of his friend in Vietnam. The conclusion of Bowker’s story is suicide, an event that is not uncommon in cases of posttraumatic stress disorder.

In the story “Stockings”, the main character named Henry Dobbins wrapped his girlfriend’s panty hose around his neck during battle supposedly as a good luck charm. He would also sleep with it against his face. Even after the war, when Dobbins and his girlfriend were no longer a couple, he still continued to sleep with and tie the stockings around his neck. Dobbins explains this act by the referral of the continued presence of the stocking’s magic. This shows an aspect of PTSD stated by the American Psychiatric Association in the DSM-IV & DSM-IV-TR wherein an individual experiencing the disorder experiences reactivity to objects linked with the traumatic event.

The Things They Carried was clearly written by O’Brien with a theme in mind. That theme involves the experiences of war veterans after surviving the war. That is to say that the book depicts the effects of the war on the soldiers and the various individuals who were involved. Tim O’Brien particularly focuses on the psychological effects that the events of the war has left. The lives of the soldiers characterized in the stories are clear examples of emotional baggage carried by survivors of the war.

Jim Neilson states in his article The Truth in Things: Personal Trauma as Historical Amnesia in The Things They Carried, the recurring them of the horrors of war. The explicit descriptions of the incidents that the characters experienced in the story were the author’s way of communicating to the audience how such events could lead to anxiety, distress, disorder, and even insanity. Andrew Morgan also acknowledges that in reality, war veterans who experienced the Vietnam War still live with the guilt and fears induced by that experience.

They carry these memories with them and are unable to lead the same lives they used to have before joining the war. These are what caused them to eventual experience of PTSD, to eventual insanity, and for some even to suicide.  Posttraumatic stress disorder is indeed a problem that plagues many war veterans today. It is encompassing in its scope and affects all aspects of the lives of those experiencing it. Tim O’Brien paints for us, in The Things They Carried, a clear picture of what PTSD is, what instances can lead to it, and the ugliness that it brings in its wake.

Neilson, Jim. “The Truth in Things: Personal Trauma As Historical Amnesia in The Things They Carried” Fortune City 11 December 2007 <http://victorian.fortunecity.com/holbein/439/essays/neilsonthings.html>.

Posttraumatic Stress Disorder in The Things They Carried. (2017, Feb 23). Retrieved from http://studymoose.com/posttraumatic-stress-disorder-in-the-things-they-carried-essay 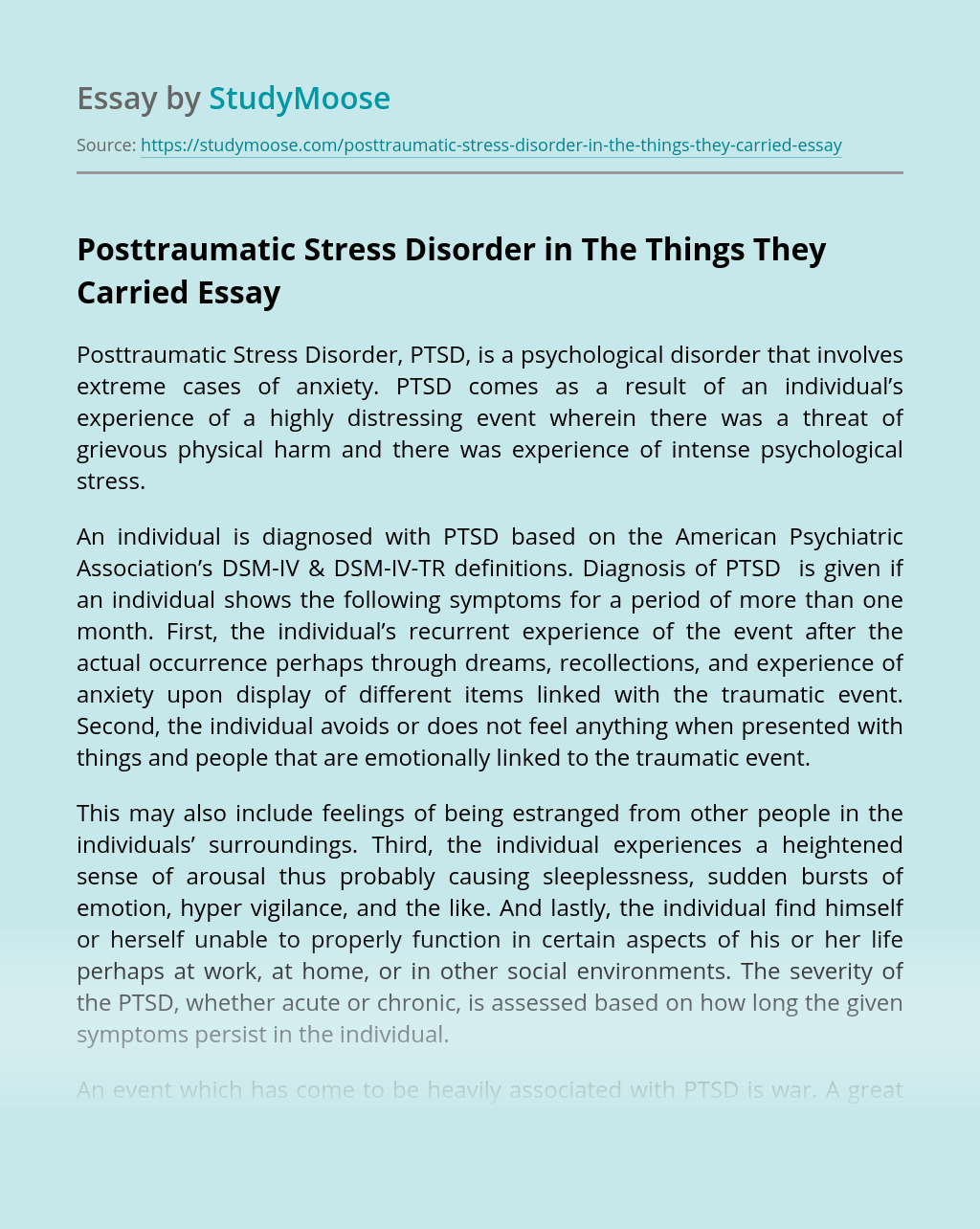 Don’t waste time
Get a verified writer to help you with Posttraumatic Stress Disorder in The Things They Carried
Hire verified writer
$35.80 for a 2-page paper
Stay Safe, Stay Original