William Blake’s 1789 and 1794 poems, both entitled “The Chimney Sweeper,” contain similar diction where the child is speaking and cries out; Blake uses simple and informal diction to create a childlike atmosphere. Each poem is set apart by point of view, creating different tone. In his 1789 version of “The Chimney Sweeper,” the point of view is from a young child, producing a happy and innocent tone for he views everything that happens to him as a blessing, unaware of what his father has truly forced him into.

Turn in your highest-quality paper
Get a qualified writer to help you with
“ “The Chimney Sweeper” Analysis ”
Get high-quality paper
NEW! AI matching with writer

On the other hand, the 1794 “The Chimney Sweeper” is based on the point of view of an adult who sees the truth behind the parents’ actions, which the child does not; this creates a critical and cynical tone. Blake uses childlike diction to bring the two poems together, and he uses tone to isolate them from one another.

The 1789 and 1794 versions of Blake’s poem both have simple, childlike diction. This is the result of a child’s narration of the first poem and a child being the main speaker in the second.

In both poems, God is referred to in terms of praise, as a child is taught to believe. Both the narrator in the first poem and the child speaking in the second seem happy and untroubled. They are unaware that they live as slaves and are doomed to perish before their time. The naïve diction of the poems is a product of the innocence of the speakers.

Blake’s 1789 version of “The Chimney Sweeper” is from the point of view of a young boy who cannot comprehend the situation in which he lives.

The child’s innocent view of his life results in the childlike tone. He believes that he “need not fear harm” because he cannot imagine that his father would place him in a position that could bring him harm. He tells Tom Dacre “when your head’s bare, you know that the soot cannot spoil your white hair,” demonstrating his positive outlook on life despite the negative conditions in which he lives. The boy’s naïve perception has given a brighter tone to a solemn situation. In Blake’s poem written in 1794 with the same title, the tone is much more negative.

It is reproachful of the society in which young boys are sold into slavery by parents who spend their time praying in church. The poem is narrated by an adult who understands the sorrowful situation as he listens to the “little black thing among the snow” tell him of his life. When asked where the his parents are, the young boy explains that they have “gone to praise God & his Priest & King.” The narrator knows that these parents are neglecting their responsibilities to their son, as are many other parents in this time.

The unfortunate, sorrowful lives of the boys in both of the poems are revealed through the parallel burdening backgrounds and through the different awareness of child and adult. Each of the boys have experienced hardships that boys their age should not be subjected to; however, they both find joy and happiness in the terrible conditions they face, for they cannot see what their parents have really done like the adult speaker in the 1794 poem can. Blake uses childlike diction to bring the two poems together, and he uses tone to isolate them from one another. 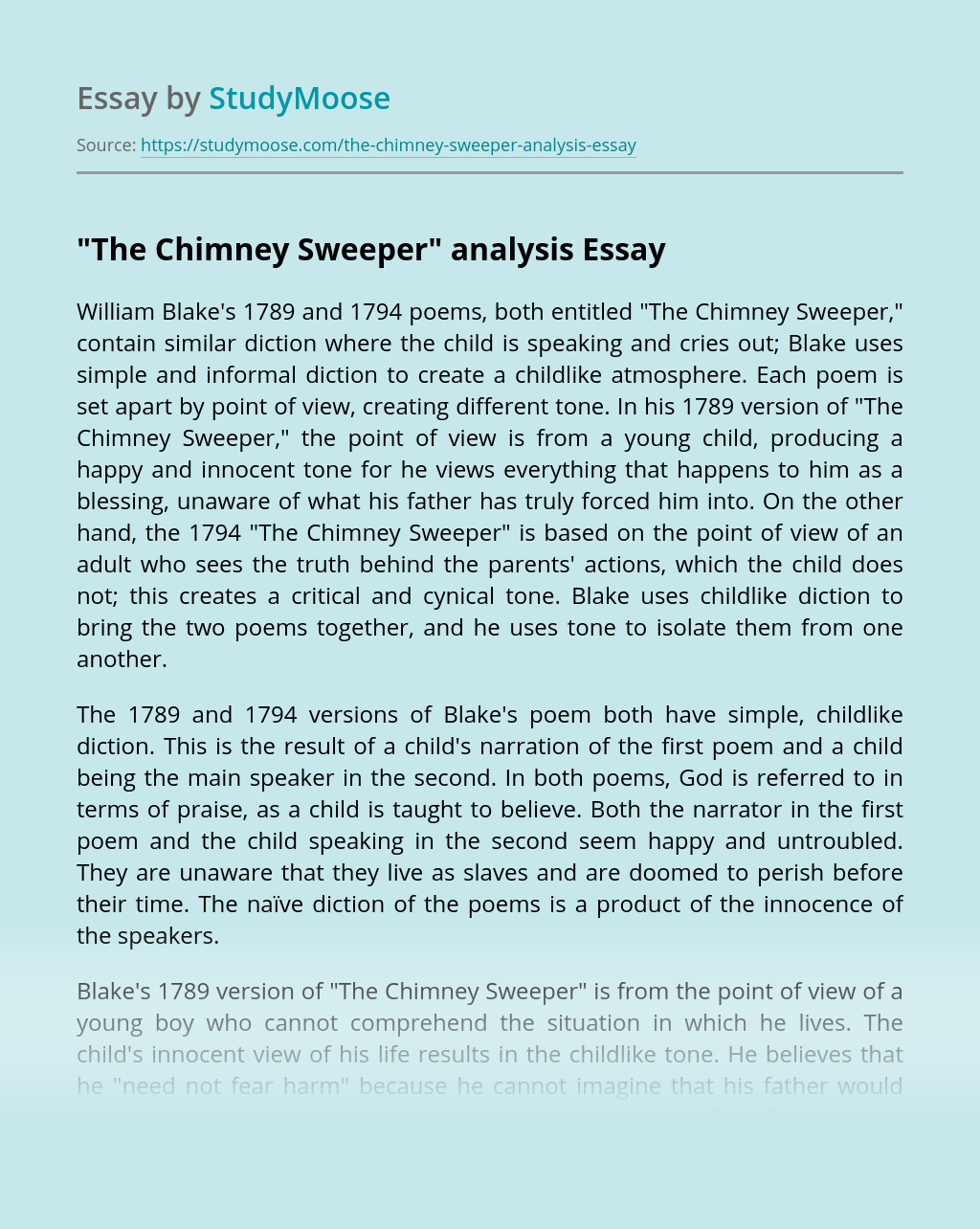 Turn in your highest-quality paper
Get a qualified writer to help you with
“ “The Chimney Sweeper” Analysis ”
Get high-quality paper
Helping students since 2015
Stay Safe, Stay Original