In William Shakespeare’s play, Othello, the character Iago lacks a superego which allowed his id to run free and this caused him to lack any form of sympathy and to become a sociopath. This led to him hurting everyone he could and to his eventual downfall. He also tried to justify his actions throughout the play to reinforce his righteous ego.

First to understand Iago and his actions we must look at what the id, ego, and superego actually are.

Don't use plagiarized sources.
Get Your Custom Essay on The Character Iago In William Shakespeare’s Play Just from $13,9/Page

According to Freud these are different divisions that make up your mind. The id is the primitive side of your mind. Its only purpose is to seek out and obtain pleasure. The id will do anything it has to obtain it goals no matter how amoral or dangerous its actions may seem. Freud states that the superego is the complete opposite of the id. The superego’s goal is to apply moral values to obtain one’s wishes.

The superego imposes guilt, shame, self-doubt, and anxiety to control one’s actions. The ego is the section of your mind you are most aware of. The ego’s goal is to compromise between the two other sections by using logic. It tries to satisfy both the id and the superego. Sometimes the ego becomes overwhelmed and to protect itself it must deploys defense mechanisms. This relates to Iago because he lacks a superego which tells him right from wrong. Since his superego is no longer functioning the ego does not have to compromise between the two sides. However his ego is not useless it still has a purpose. It uses logic to get what his id wants that’s why Iago always has a plan to obtain what he desires and it also justifies his actions. His ego also justifies his actions so he can live with himself. Therefore Iago’s id and ego are operating as they should and it is his superego that is absent.

Without a superego and left with his id in control, Iago has all of the traits of a sociopath according to the American Psychiatric Association’s diagnostic and statistical manual of mental disorders. The first trait that Iago has in common with a sociopath is deception. Iago constantly lies throughout the novel to just about everyone he meets. One example of this is when he is speaking with Montano and he says, “Tis evenmore the prolongue to his sleep. He’ll watch the horologe a double set If drink rock not his cradle.”(Othello II, III, 89). In this quote Othello is trying to spread a rumor about Cassios’s drinking problem. Except Cassio does not have one. Iago is trying to ruin Cassio’s reputation. This example also leads to another trait of Iago’s which is his conning and manipulation. Like deception Iago uses manipulation throughout the play.

For example Iago is talking to Roderigo and he says, “Thou art sure of me. Go, make money. I have told tee often, and I re-tell thee again and again, I hate the Moor. My cause is hearted. Thine hath no less reason.”(Othello I, III, 53). In this quote he is trying to convince Roderigo that he into giving him all of his money because they share the same cause. However Iago is just trying to use Roderigo to obtain money. The final trait Iago has is that he lacks empathy and he lacks remorse. I excellent example of this is when Iago’s wife, Emilia, is about to illuminate Iago’s plan to ruin Othello. Iago stabbed Emilia, his wife, before she could elaborate and later on she died from her wounds. Iago felt no remorse for the death of his wife and showed no empathy towards her when he stabbed her. Sociopaths are very capable of self – control. Like Iago they use logic to take calculated risks and to blend in with society. Iago does this throughout the novel which is why he was known as honest Iago because he blended in so well that no one suspected that he was committing any amoral acts. Most of Iago’s actions throughout the novel can be associated with calculation, deception, Manipulation, and lack of empathy and remorse. These are the traits of a sociopath therefore Iago can be considered a sociopath.

Iago’s traits and actions would cause most people to become guilt ridden even without a superego. However Iago does not because his ego deploys a defense mechanism. This mechanism is called rationalization. Iago makes up excuses and justifications for his actions. For example the whole point of him trying to make Othello jealous was to get Cassio fired. He felt that he was more deserving of Cassio’s position however once he has the position he continues to try to ruin Othello’s life. He also justified his actions against Othello by telling himself that Othello slept with his wife however this was just a rumor and was never proven. He justifications is how he is able to able to live with the things he had done. The plot of this entire novel is based on Iago’s sociopathic traits.

Without any of these traits the plot of this novel would dramatically change. Iago is a direct cause for most of the events in the novel such as Othello becoming suspicious of Desdemona or the deaths of some of the characters. Without these traits Iago would no longer act like a sociopath and therefore he would no longer be the antagonist. The character Iago is very much a sociopath. He lacks sympathy for others and will take advantage of them given the chance. His lack of a superego accounts for this because his id is allowed to run free without any restrictions. This leaves his ego to justify his actions and to make calculated decisions to satisfy the id without getting caught. However his id’s desires eventually lead to his and everyone else’s downfall. 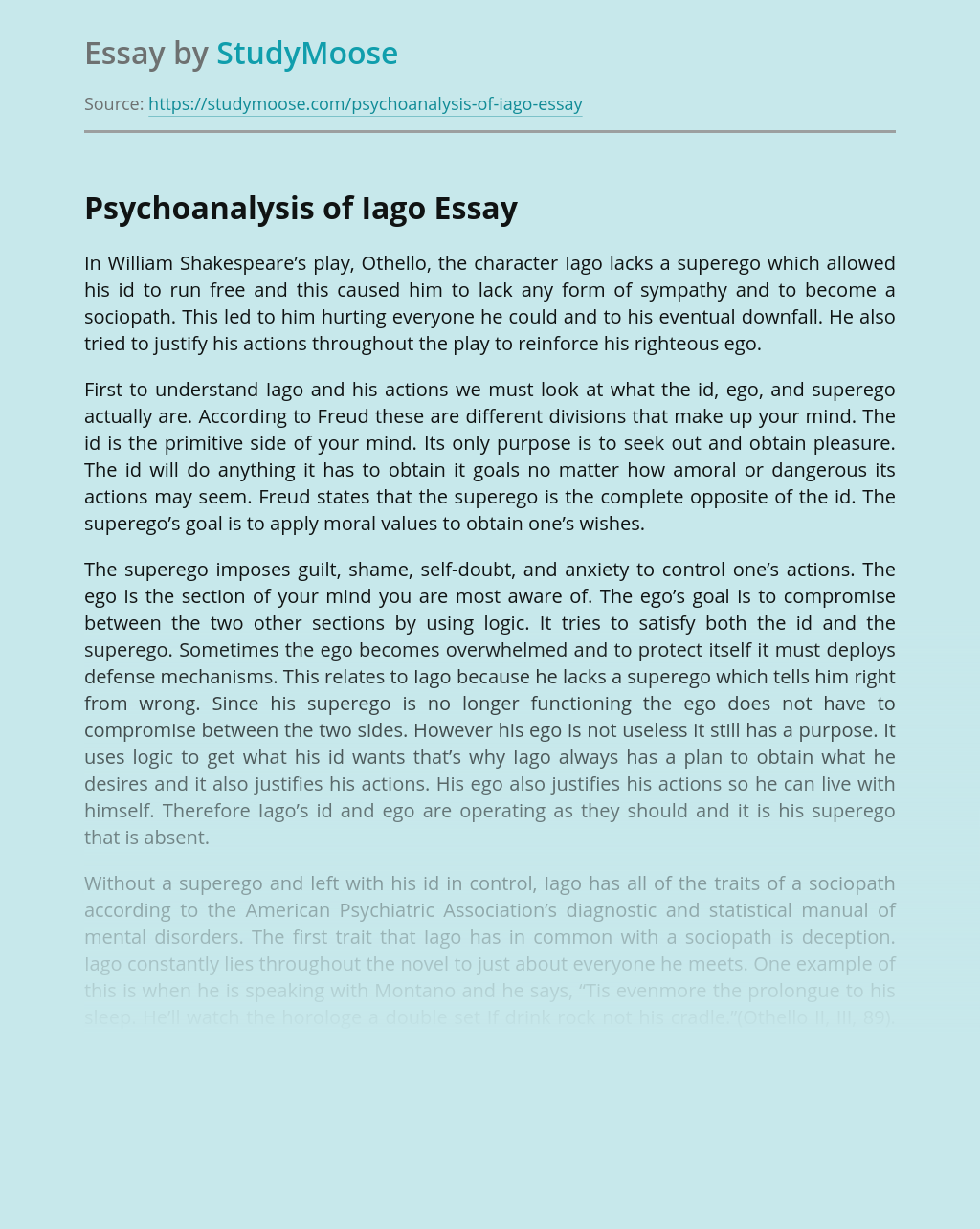 Rate this post Iago strategically arouses Othello’s jealousy by allowing Othello to come to the conclusion that Desdemona is carrying on an illicit affair with Cassio. Iago states in a barely audible voice, as though he didn’t really mean to say anything, “Ha! I like not that” (3. 3. 35). Othello asks him what he...

Rate this post Jealousy is a lethal weapon if used in the wrong hands. Jealousy is the feeling of resentment against someone’s success or advantages. In the texts, “Othello” and “How to Get into Medical School, Part l and Part ll”, the authors William Shakespeare and Vincent Lam decide to use the theme of jealousy...

Get Essay
Is Iago The Perfect Villain?

Rate this post Few Shakespearian villains radiate evilness and jealously quite as much as Iago, the unbeknown nemesis of the play’s title character, Othello. In other plays written by the bard of Avon the villains can come across as one-dimensional- weak, personified by a flaw in their genetic make-up or unattainable ambition yet Iago is...

Iago's soliloquy at the end of Act 1

Rate this post “Iago’s soliloquy at the end of Act 1; what does his language tell us about his character and motivation? How does it compare with his language in the rest of the act”? Iago seems to be presented as a Machiavellian villain; he is cunning and always seems to know what’s going to...

Rate this post Now, Hamlet, hear. ‘Tis given out that, sleeping in my orchard, A serpent stung me. So the whole ear of Denmark Is by a forg©d process of my death Rankly abused. But know, thou noble youth, The serpent that did sting thy father’s life In this scene the ghost is telling hamlet...

Rate this post In the play Othello, our first impression suggests that Iago and Othello are portrayed as having somewhat opposite qualities. Iago is first shown to be false and pretentious. Even though he says “I will wear my heart upon my sleeve”, giving the impression that he shows all his emotions willingly, he is...

Rate this post Within Act 5, Scene 2 of the Shakespearian play Othello, Lodovico informs Othello he is to lose command and Cassio will end up being the guv of Cyrpus instead. Subsequently, Othello is to be held jail and will wait for trial. It is from this point in the play that Othello protests...

"The Three Strangers" and "Of Mice and Men"

Rate this post In this large reading task I am going to compare two different stories, John Steinbeck’s ‘Of Mice and Men’ and Thomas Hardy’s’ The 3 Complete strangers’. Both stories are composed in totally different nations. Hardy was composing in 1883 about rural Dorset in the 1820’s and due to the fact that of...