The Changing Meaning of Affirmative Action

Don't use plagiarized sources. Get your custom essay on
“ The Changing Meaning of Affirmative Action ”
Get custom paper
NEW! smart matching with writer

We hear all of these in theory. But why are they important? Why should we even care? I believe that the answer is the same as learning all history – so we don’t move backward in time and make the same mistakes we have made in the past. Can you be separate and still be equal? How can we attempt to fix the mistakes made in our past? All of these I hope to answer as we discuss the Plessy and Brown cases, the Civil Rights Act and the Voting Rights Act, and affirmative action.

Civil rights cases such as Plessy v. Ferguson (1895) and the Brown v. Board of Education (1954) served as the starting point for the Civil Rights Movement. Completely contradicting in verdicts, they tried to determine if ‘separate but equal’ and segregation is justified in the Constitution. Plessy v. Ferguson occurred when a man with a mixed racial background sat in a whites-only railroad car to protest a Louisiana segregation law.

He was arrested and tried to appeal to the Supreme Court, saying that segregation was a violation of the equal protection guaranteed in the Fourteenth Amendment. The jury disagreed in a 7-1 decision. The Plessy v. Ferguson verdict was that segregation could still be enforced as long as everyone still has equal opportunity.

However, this changed whenever the Brown v. Board of Education cases occurred in 1954 in Topeka, Kansas. Composed of five separate cases compiled under one name, students applied to a school and were denied acceptance solely based on their race.

The students and their parents (one of them being a man named Oliver Brown, for whom the case was named) claimed that this was a violation of the 14th Amendment’s equal protection clause. The court decided that this was a violation of their rights because of the implication that African Americans were not as intelligent as their white students and would harm their school. This completely contradicted the Plessy v. Ferguson case and overturned its verdict for good.

Even after the Brown v. Board of Education case, some places were still in direct opposition to the new idea and still tried to block African Americans and Hispanics from the all-white schools. Many of these schools still tried to promote separate but equal idealisms. Do the Fourteenth Amendment strike down segregation under the Equal Protection and Due Process clauses? Plessy v. Ferguson seems to disagree. However, the more recent Brown v. Board of Education case decided that the Fourteenth does. Separate but equal has been shown to be a thing of the past, as evidence was shown in the Board of Education case that African Americans suffered from the denied acceptance to a white school based on their skin color, no matter how qualified they might be in intelligence. Both cases have shown a turning point in how people are thinking of African Americans and other races and opened the field to the movement. African Americans realized that whites were finally starting to see their potential and decided it was time for a change. Thus began the Civil Rights Movement.

After the Civil Rights movement began, lawmakers tried to correct some of the wrongs done towards different racial backgrounds. The Civil Rights Act of 1964 included eleven sections that addressed these issues, among others: protections against discrimination in the workplace, agencies receiving public funds, and school segregation. According to the Library of Congress, the Civil Rights Act “prohibits discrimination on the basis of race, color, religion, sex, or national origin in voting, public accommodations, public facilities, public education, federally funded programs, and employment.” First pushed by President John F. Kennedy, it was signed into effect by President Lyndon B. Johnson after Kennedy was assassinated. It was intended to “fulfill the promise of the 14th Amendment” (according to the National Archives) If the protections outlined above are violated, the federal government has the right to take away funding from these places as well as filing lawsuits against them. Without federal funding, it is very hard to be successful, especially in the educational system. Among the other things it accomplished, it also ended up in the creation of the Equal Employment Opportunity Commission (the EEOC). However, it did not accomplish its goal completely.

The Voting Rights Act had a much more immediate effect on the Civil Rights Movement than acts preceding it such as the. The Voting Rights Act is intended to help enforce the 15th Amendment of the Constitution. Section 1 of the 15th Amendment says, “The right of citizens of the United States to vote shall not be denied or abridged by the United States or by any State on account of race, color, or previous condition of servitude.” The Voting Rights Act of 1965 aimed to increase the number of poor whites and African Americans who were registered to vote. It outlawed tests like literacy tests and understanding tests that discriminated against people who had fewer chances to obtain an education. The 15th Amendment gives everyone the right to vote, but the Voting Rights Act opened it up more to everyone. It is more of a supplement to what is already in the Constitution than a new law. Previously moving at a snail’s pace, the Voting Rights Act surged the Civil Rights Movement forward, giving African Americans and other races and minority groups more rights than ever before. However, in the 2013 Shelby County v. Holder case, the clock was turned back on this act. A major piece of the Act was struck down. The power of the Federal Government to make voting laws was given back to the states and they went back to things like photo IDs and limiting early voting practices. Therefore, it may help the people it was originally intended to help, but it discriminates against a new group of people. It discriminates against people who have a low income/no transportation, those who are elderly, or those who cannot drive. Nowadays, affirmative action is the main way that people attempt to protect against discrimination.

The phrase ‘affirmative action’ was first introduced to the United States in the Civil Rights Act of 1964. To quote the West Encyclopedia of American Law, affirmative action ” refers to both mandatory and voluntary programs intended to affirm the civil rights of designated classes of individuals by taking positive action to protect them” from discrimination.” In layman’s terms, that means that groups are created that assist people who have been subject to discrimination in the past. It gives benefits and assistance to African Americans, women, Asian Americans, people with low or no income, and disabled persons who have had to fight for their rights throughout history. It also attempts to help people of different racial backgrounds break through the ‘glass ceiling’. In theory, this is all well and good.

But the controversial question concerning affirmative action is: Should it be allowed to protect the rights of minorities when it infringes on the basic majorities? I think that affirmative action often discriminates against the majority, usually white middle-class men. If you are assisting the minority, the majority often will suffer through reverse discrimination. Therefore, even if you do the same amount of work, have the same level of success, the minority will often win out. Even if you have the same qualifications, people may still decide to choose the minority to avoid ‘being discriminatory’. So does affirmative action really do what it is supposed to? I would think that the answer is definitely no. In the 2013 and 2016 Fisher v. University of Texas cases, it was decided that race could be taken into account when making decisions on who to admit. Can’t that discriminate both ways? If you know that someone is white or black, you can decide based on that. But wouldn’t it be better to decide based on academic standings and abilities to make your college better? Race-neutral, instead of affirmative action seems to be a clear solution. Using affirmative action will almost always result in discrimination against the majority. But race-neutral gives benefits to the people who deserve to succeed.

So I would like to ask the same questions I asked at the beginning once more. Why are all of these important? Yes, because they are a part of history, but also because they still affect us now! All of these still have a monumental effect on how we live now. The Plessy v. Ferguson and Brown v. Board of Education cases were the foundation for many of the parts of the Civil Rights Movement. The Civil Rights Act and the Voting Rights Act gave many of us the rights we have now. Affirmative Action is still going on – successfully to an extent although it goes a bit overboard sometimes. Why should we care? We should care because we need to know what is going on today and why. The court cases influenced the laws that are still in effect and affirmative action is going on now and probably will for a long time to come.

The Changing Meaning of Affirmative Action. (2020, Oct 01). Retrieved from https://studymoose.com/the-changing-meaning-of-affirmative-action-essay 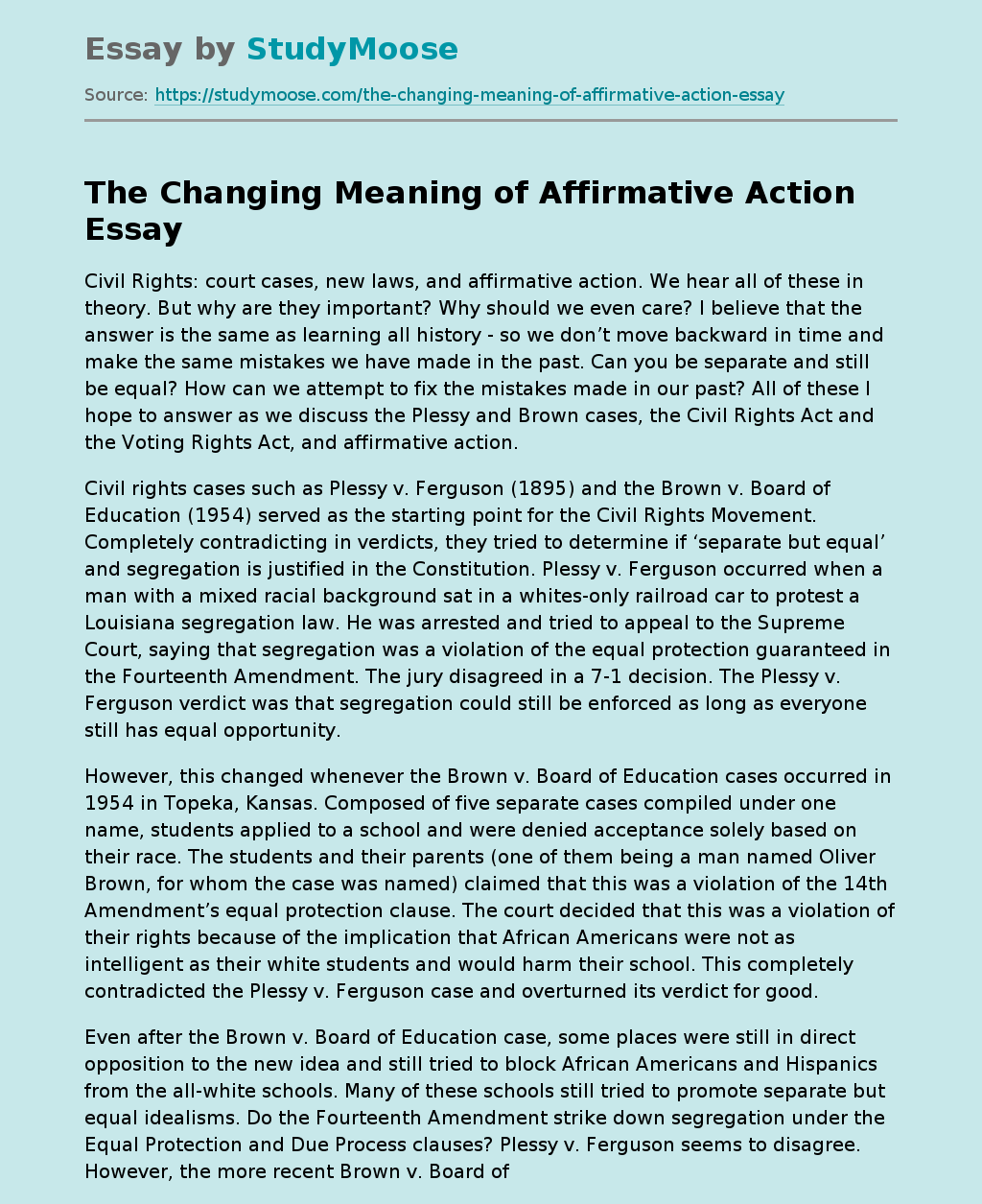