Plautus’ comedy The Brothers Menaechmus easily brings about laughs. The play is full of comedic motifs that keep the audience entertained. For example, in this comedy there is dirty and sexual humor, mistaken identities, asides, literal wordplay, and running gags all throughout but this paper will focus on a few key parts. This comedy outdoes itself when it comes to dirty and sexual humor . For example, in the play when Menaechmus had just stolen his wife’s night gown he asks Peniculus to smell the skirt with which he replies “I’d rather smell the upper part of a woman’s garment; elsewhere the nose detects a somewhat unwashed odor.

Turn in your highest-quality paper
Get a qualified writer to help you with
“ The Brothers Menaechmus ”
Get high-quality paper
NEW! AI matching with writer

This is funny because it shows the dirty side of male conversation when the two fuss with each other over what had been done. The next motif that can be seen is mistaken identity in the scene when Cylindrus mistakes Sosicles’s identity for that of his twin brother’s Menaechmus.

This motif is applied by having Sosicles and Cylindrus run into each other in the marketplace and he thinks Sosicles is Menaechmus. This scene is very funny because Sosicles and Messenio think Cylindrus is a nut job and the dialogue between them is insulting but humorous.

Asides are common throughout this play as well. They provide the audience with some extra information that, in this particular play, tend to be humorous. For instance, right after the scene where Cylindrus mistakes the identity of Sosicles for that of Menaechmus he looks to the audience (aside) and states that it is quite normal for them to do that.

That it is a game they play. This aside is funny because it shows that Cylindrus truly believes that he is talking to Menaechmus when he really isn’t.

The entire circumstance is quite hysterical. The next motif that is effectively applied is literal wordplay . In the scene where Erotium and Sosicles first meet and she as well mistakes his identity for Menaechmus literal wordplay is used in a very smart-aleck way. When Sosicles attempts to explain to her that he has never step foot into the country until then and had come on a ship she asks him what he meant by ship. To this he responds with a very literal description of what a boat is.

This is funny because the audience knows that this wasn’t the intended response Erotium had wanted. Finally, running gags are used throughout this play. When Sosicles realizes that he can use his mistaken identity to profit when he is handed an expensive gown he decides to see what else his luck can get him. This is funny because Erotium was just playing Menaechmus in order for him to buy her expensive things but Sosicles is unknowingly using the identity of his twin brother to get his hands on these nice items.

When the maid asks Sosicles to take an expensive bracelet to get it refurbished he tries to see what else he can get by asking if he should also take the “arm-lets I gave her”. The maid then tells him he never did such a thing. This motif is well applied. Plautus’ The Brothers Menaechmus is full of comedic motifs such as dirty humor, mistaken identities, asides, literal wordplay, and running gags that allow for a very humorous play. They are applied well and makes for an entertaining read. 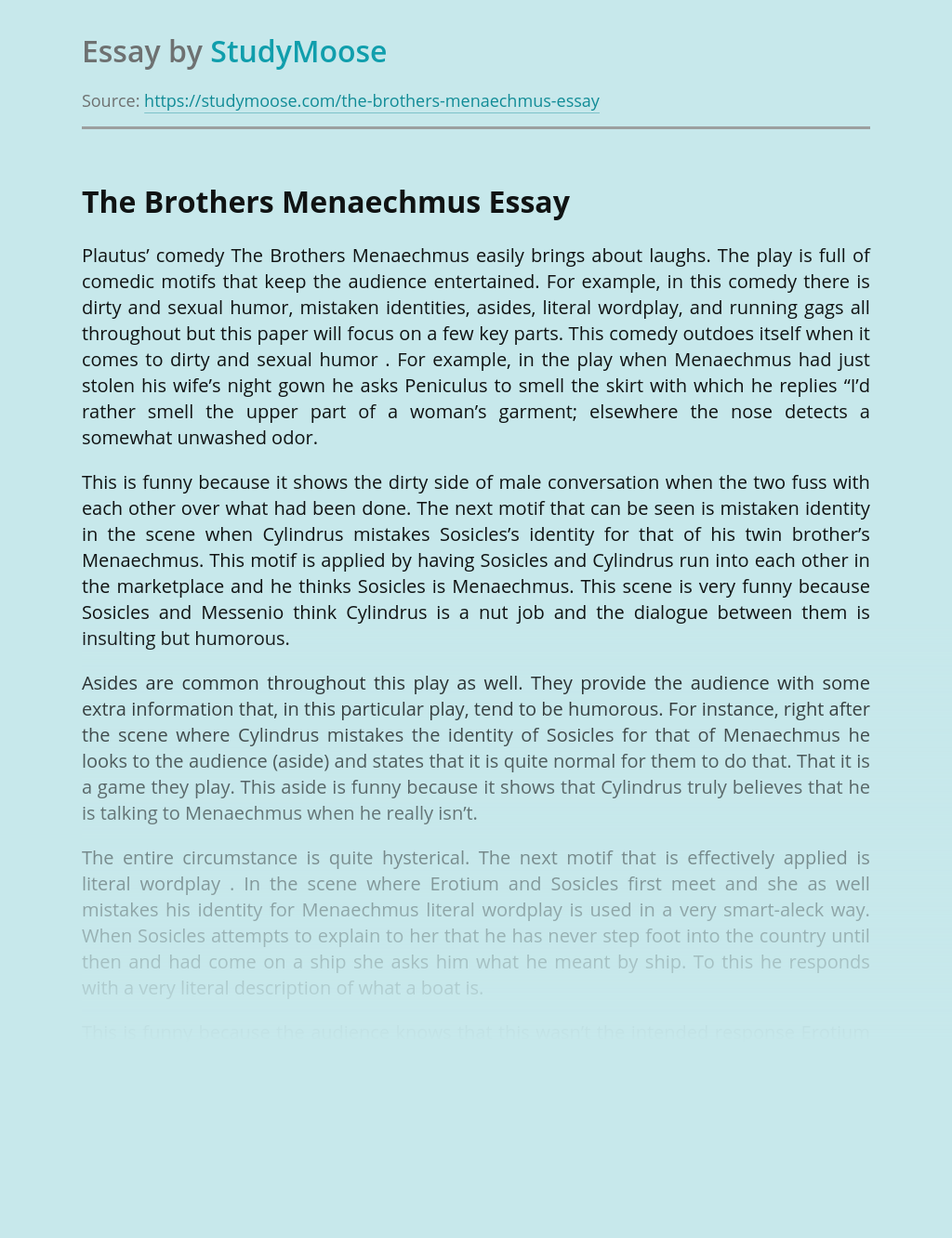 Turn in your highest-quality paper
Get a qualified writer to help you with
“ The Brothers Menaechmus ”
Get high-quality paper
Helping students since 2015
Stay Safe, Stay Original