Mark Twain depicts various types of humor in The Adventures of Huckleberry Finn. Satire is the first type of humor evident in the novel. Religion is the most common example of Twain’s satire, which he communicates through the character Huck Finn. Throughout the novel Twain satirizes prayer through Huck. In Chapter One, the Widow Douglas attempted to convey the importance of religion to Huck. She took out her bible and read stories of Moses to Huck. Huck was intrigued by the story of Moses and broke into a deep sweat as he waited to find out more about the biblical figure.

Don't use plagiarized sources. Get your custom essay on
“ Humor in Huck Finn ”
Get custom paper
NEW! smart matching with writer

However, once Huck learns that Moses is dead, he immediately loses interest in the stories. This example demonstrates Twain’s opposition to the blind faith found in church teachings.

Parody is a second type of humor revealed in The Adventures of Huckleberry Finn. Parodies are most obvious in the exploits of the character Tom Sawyer. When Tom Sawyer’s gang of robbers was created Tom describes where he was able to think of such a “beautiful” oath.

The book states, “Everybody said it was a real beautiful oath, and asked Tom if he got it out of his own head. He said some of it, but the rest was out of pirate books and robber books, and every gang that was high toned had it” (Twain 10). This is an example of parody because Tom Sawyer bases his life and actions on adventure novels and in this case created an oath out of them.

A third type of humor that Twain employs is burlesque, specifically through caricature. This can be seen through the description of Huck’s father. In the following passage caricature is predominantly noted. He was most fifty, and he looked it. His hair was long and tangled and greasy, and hung down, and you could see his eyes shining through like he was behind vines. It was all black, no gray; so was his long mixed up whiskers.

There weren’t no color in his face, where his face showed; it was white; no like another man’s white, but a white to make a body sick, a white to make a body’s flesh crawl – a tree toad white, a fish belly white. (Twain 24) Pap’s character generates an excellent example of burlesque through caricature. Huck describes his father as one would visualize him. From the description provided to the readers, Pap Finn is seen as an older man, very unkempt, pale as a ghost, and very hairy with a frightening appearance.

Farce is yet another form of humor found in The Adventures of Huckleberry Finn. This type of humor is evident when Huck is kidnapped by his father in Chapter Six. Pap keeps Huck locked in their cabin, never letting Huck go anywhere unless Pap accompanies him. Pap hid the key under his pillow so that Huck would not escape. In a later scene, Pap chases Huck around the house with a gun. Although in modern society these scenes would be considered dark and dangerous, in Twain’s day it was thought to be a farce due to Pap’s physical use of humor. 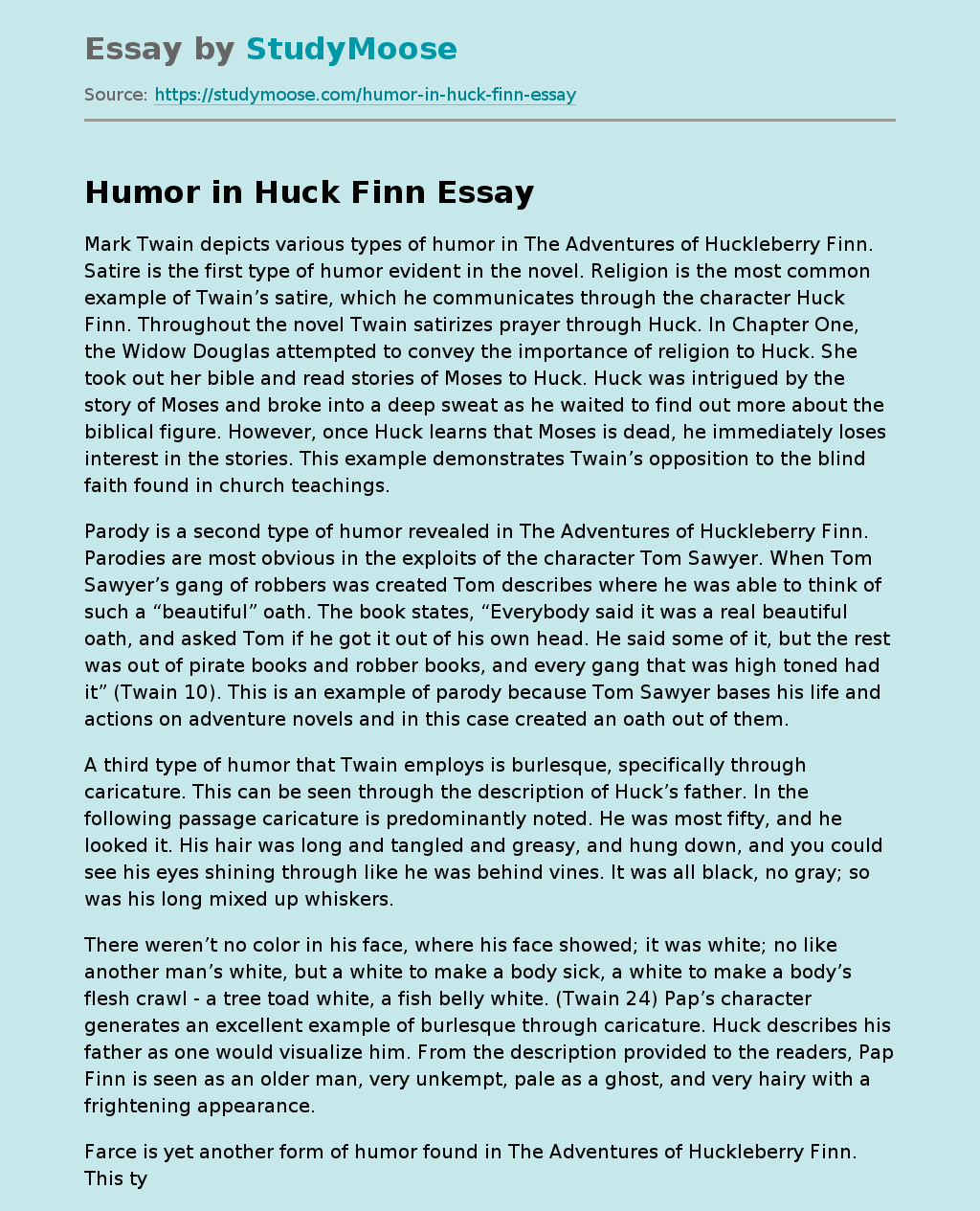