Is “Huck” in The Adventures of Huckleberry Finn, by Mark Twain, a good literary character for young readers today? He is seen at the outset of the novel as a troublesome young child who needs to be taught how to act in a civilized manner and Widow Douglas and Miss Watson, models of conventional society take him in, attempting to educate him. His father however kidnaps him, and Huck is no longer trapped by the conformity of society, but rather by the harsh treatment of his abusive father.

Still seen as a misfit child, his character gains some respect from the reader when he is able to fake his own death and escape from his father’s jail. When Huck and Jim, Miss Watson’s runaway slave, first encounter one another after both of them have escaped from society, Huck views Jim as property, but decides to help him anyway.

At this point Huck’s character is developing along with the reader’s respect for him as a young adult.

His important decision to help Jim escape from slavery foreshadows Huck’s moral change that will eventually occur in the novel. As the story progresses, Huck and Jim spend significant time together traveling down the Mississippi River, where Jim’s individual character begins to develop along with the two fugitives’ personal relationship. By the end of the novel Huck sees Jim as an equal, believing deep down in his heart that Jim is a free man. Due to his departure from conventional society as well as his personal relationship with Jim, Huck is able to undergo extensive moral development as the novel progresses.

Although by the end of the novel Huck has become an individual with his own opinions and morals, throughout the first section of the story he is still a radical young boy being trapped by the conformity of conventional society. Prior to being taken in by Miss Watson and Widow Douglas, Huck lived a rugged life with his abusive, alcoholic “Pap”. Huck was happy with this lifestyle of not going to school, and stealing to get by day to day. His introduction to society and the normal lifestyle it brings with it, strangles the adventurous nature of Huck’s character and he becomes unhappy. After getting used to attending school regularly, using table manners, and being taught to believe in God, Huck makes an important observation by saying, “I liked the old ways best, but I was getting so I liked the new ones too, a little bit. The widow said I was coming along slow but sure, and doing satisfactory. She said she warn’t ashamed of me” (Twain 15).

At this point it is apparent that Huck has not yet developed a mind of his own. He is letting society influence the way he acts and thinks, not showing any of his true character. By conforming and adopting the ideals of conventional society, Huck is not thinking or living to his full potential. The reader does, however, see a slight change when Huck and Jim meet at Jackson’s Island where Huck admits that “people could call me a low-down Abolitionist and despise me for keeping mum- but that don’t make no difference” (Twain 36). Even though he knows society would not agree with his decision, Huck has agreed to help Jim escape.

Huck’s personal choices, as well as morally challenging decisions made while traveling the Mississippi with Jim, are crucial to the development of his character. Although Huck did decide to help Jim escape from Miss Watson, he was originally only in it for the adventure and planned on turning Jim in further down the river. However, Jim turns out to be a caring man who treats Huck with immense respect and attention. Had Huck still been under the influence of conventional society, his decision probably would have been different, because slaves were considered nothing more than property and Huck had been taught to believe that fallacy. The two runaways form a relationship while traveling down the Mississippi River in which they help and protect each other. Huck begins to think of Jim as a friend and the father he never had. This change is made when Huck admits that “it was fifteen minutes before I could work myself up to go and humble myself to a nigger; but I done it, and I warn’t ever sorry for it afterward, neither” (Twain 86). Along with Huck’s feelings of some form of racial equality came feelings of guilt.

Huck is still feeling guilty for stealing another person’s property, someone who had never done anything to harm him. One literary critic says that, “No more devastating comment has ever been made on the fraudulent pretensions of civilization then the great scene in which Huck struggles with himself over the question of whether to turn Jim back to Miss Watson” (Podhoretz 2). At this crucial point in the story it can be noticed that the influence of society is still hovering over Huck in some way, but he is attempting to create his own moral opinion on the subject.

In his struggle, Huck writes a letter to Miss Watson telling her where she can find and recapture her runaway slave, but before sending the letter, he thinks about his relationship with him and the positive influence Jim has had on him, thinking, “all right, then, I’ll go to hell’- and tore it up. It was thoughts and awful words but they was said. And I let them stay said; and never thought no more about reforming” (Twain 214). Here Huck has reached his greatest self accomplishment; he figures out the morally correct thing to do, without the influence of society.

No sooner did Huck reach his paramount decision, than his convictions are challenged when Jim is sold to the Phelps’s plantation and he comes into contact with his old friend Tom Sawyer. The plantation belongs to Tom’s Aunt and Uncle, who are expecting a visit from Tom. Huck arrives at the plantation with the intent of finding Jim and setting him free once again, but the couple mistakes him for Tom, he goes along with it. Tom arrives at the plantation and Huck living there with him, begins to regress from his newly found moral achievement. The introduction of Tom into the story is symbolic of the introduction of conventional society back into Huck’s life. He has always seen Tom as being the more intelligent half of the twosome, and when they team up to free Jim, Huck returns to the lower position. Huck allows Tom’s elaborate escape plan and foolish games to influence his actions. He is focused on achieving freedom for his friend, and is willing to do anything to accomplish that goal.

Huck passionately proclaims his true feelings to Tom when he states that, “What I want is my nigger; and if a pick’s the handiest thing, that’s the thing I’m a-going to dig that nigger out with; and I don’t give a dead rat what the authorities thinks about it nuther” (Twain 246). Seeing Jim being held captive on the plantation reminds Huck to stay true to his self-proclaimed values, and not lose sight of a promise to Jim to gain him his freedom. Achieving this goal and freeing Jim from slavery would enable Huck to remain an individual and overcome the influence of society that had entered back into his life. At the end of the story Huck is able to talk to Jim with a feeling of accomplishment as he tells him that he’s, “a free man again, and you won’t ever be a slave no more” (Twain 275).

How is Huck able to achieve this accomplishment? It is his departure from conventional society as well as his relationship with Jim that allows Huck to develop considerable moral character. At the start of the story Huck is restricted by society and forced to believe what they tell him to believe, so he does not feel any personal connection with Jim. Once Huck leaves society he starts to form his own opinions and moral values based upon the way Jim acts towards him. His relationship with Jim makes Huck realize the equality of blacks and he thinks of Jim as a trusted and respected person and friend. On the Phelps Plantation the introduction of Tom acts as the entrance of society back into Huck’s life, and causes him to regress, but he is able to overcome its influence by the constant reminder of Jim’s captivity. Huck, in the end, demonstrates the importance of establishing a mind of your own, outside that of conventional society. 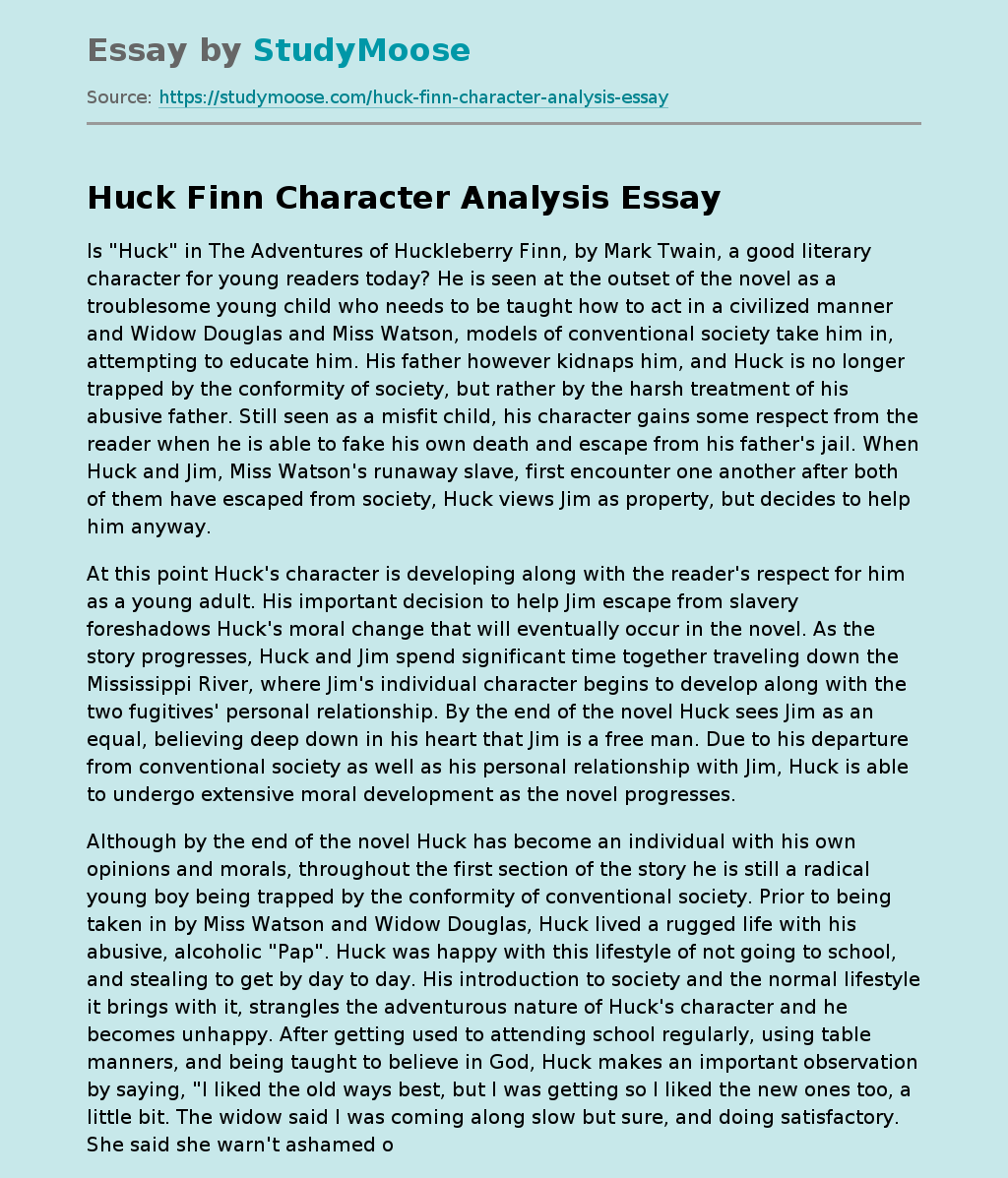