Slavery, racism, and independence are all exposed to Huck Finn during his voyage down the Mississippi Rivers. Mark Twains’, The Adventures of Huckleberry Finn, speaks of a young immature boy name Huckleberry Finn and his struggle of maturing during a ruthless time period. While Huck Finn struggles through his adolescence, he finds acceptance in the most unexpected people and experiences. The Adventures of Huckleberry Finn, written by Mark Twain, depicts life during the pre Civil War Era and the dramatic effects it has on Huck Finn and everyone around him.

Don't use plagiarized sources. Get your custom essay on
“ The Adventures of Huckleberry Finn Novel Review ”
Get custom paper
NEW! smart matching with writer

The Adventures of Huckleberry Finn’s setting is imperative to the novel. The novel starts in the town of St. Petersburg, Missouri between 1835 and 1845. During this time period, slavery and racism was the way of life in the South where the word “nigger” (Twain 11) was used without hesitation. The Emancipation Proclamation was more than fifteen years away from being issued (Emancipation Proclamation). As the novel progresses, the main setting becomes the Mississippi River.

Along the river Huck Finn and Jim make stops in small towns within Missouri and Arkansas. The towns are stereotypical consisting of a wide range of people from drunk to sophisticated.

The towns were small enough to know everyone, but have thriving economies. The residents were knowledgeable about the river and to prevent flooding they have their houses “set up three or four foot above ground on stilts” (Twain 162). Also, the stores and houses are “shackly and dried-up frame concerns that hadn’t ever been painted” (162). This was because the citizens had things of greater importance to spend their money on such as food and clothing.

Being raised in the South during this time period effects Huck Finn’s life experiences.

The protagonist is Huckleberry Finn who matures throughout the novel. Huck Finn is a fourteen year old boy who experienced an unfortunate upbringing because of his drunk father and deceased mother. He is not the strongest teenager, but when Huck Finn is able to find his dad’s “tracks in the snow” (27), one can infer Huck Finn is able to manage in the wilderness. He does not show etiquette or practice proper manners, but Widow Douglas took Huck Finn “for her son , and allowed would civilize” (9) him.

The novel is written in first person, with Huck Finn as the narrator. As a result of this, the reader knows almost everything about Huck, including his thoughts, making him a round character. At times throughout the novel Huck Finn can be passionate, caring, and sincere, but at other times he can be rude and unkind. An example of Huck Finn’s attitude changes is when he calls Jim a “tangle-headed, old fool” (102), but then later goes and apologizes to “a nigger”(104). Huck Finn’s development and change as a character makes him a dynamic character. Huck Finn changes throughout the novel due in part to Jim, and the experiences they share.

The novel begins with Widow Douglas trying to civilize Huck Finn. Huck Finn fakes his own death, because he does not accept Widow Douglas’s ways, and ends up on Jackson Island with Jim. Huck is running away from his alcoholic father as well who wants Huck Finn to “drop that school” (30). Huck finds out that the town farmers are after Jim, so Huck and Jim take off down the Mississippi River in hopes of arriving in Cairo, where the Mississippi meets the Ohio River. During the voyage down the Mississippi River, Huck Finn and Jim stop at many small towns where they encounter experiences that will change the two characters.

Huck Finn finds out about this and is very angered. Huck Finn finds out where Jim is and goes and gets Jim. Huck Finn realizes that Jim was sold to Tom Sawyers’ aunt and uncle. Huck comes up with elaborate plan that ends up getting Tom Sawyer shot in the leg. Huck Finn later finds out that Jim was free all along since Widow Douglas died and put in her will for Jim to be free (Cliffnotes.com). Jim was just along for the adventure. Huck Finn gets one last chance at being civilized by Aunt Sally, but refuses and heads West.

Slavery and Racism significantly influenced Huck Finn, which is portrayed in The Adventures of Huckleberry Finn. After Huck Finn fakes his own death, his life changes drastically. He travels down the Mississippi River and encounters many eye opening experiences. During Huck Finn’s travels he finds out things about himself and the others around him. His experiences with Jim taught him maturity and important life lessons which will stick with Huck Finn for life. 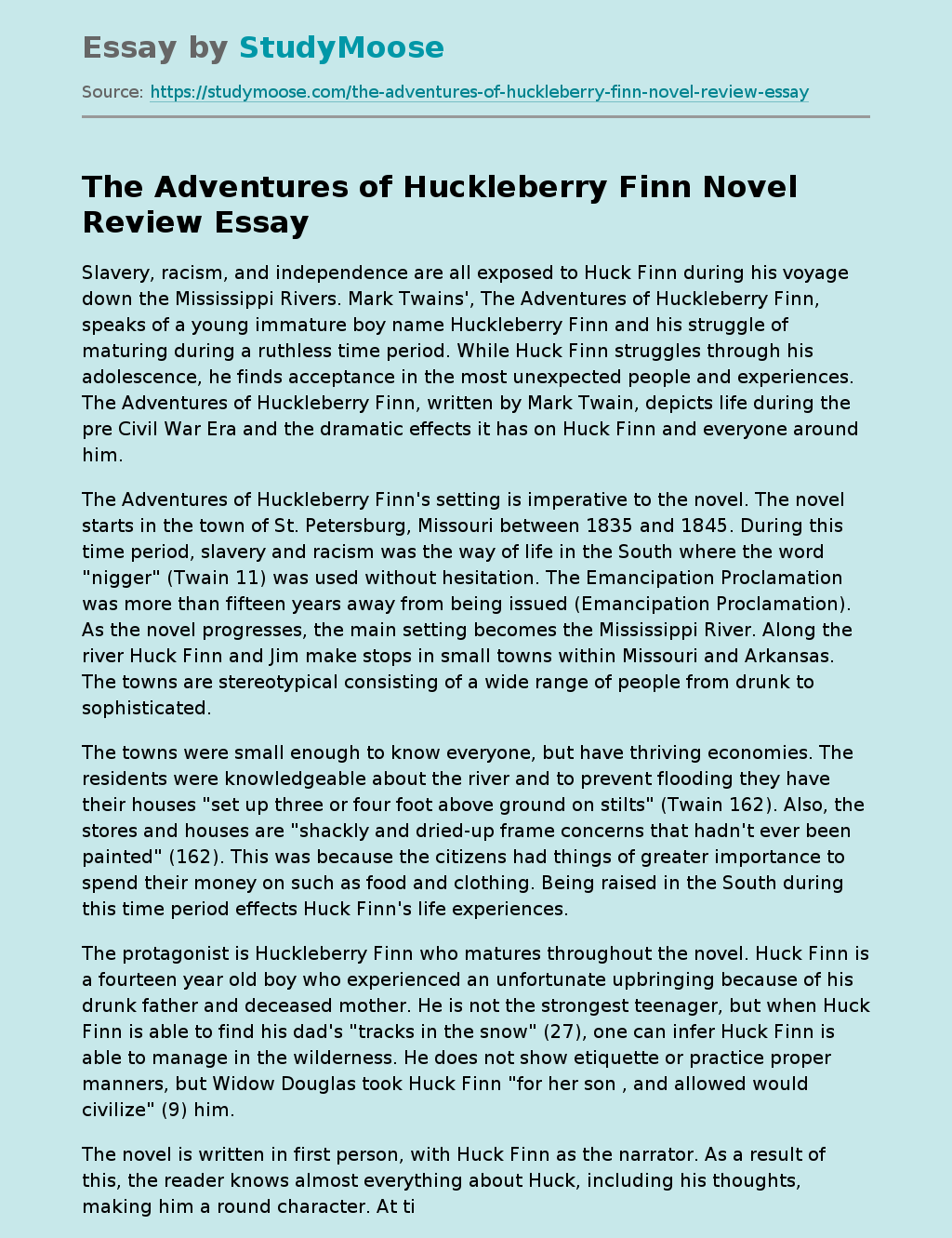