The Birth of Chemotherapy in Yale

Medical science has profited from the study of agents used in chemical warfare. Sulfur mustard gas not a gas or a mustard, but rather a yellowish-brown vaporized liquid with a mustard seed-like odor is known primarily as an incapacitant rather than as a lethal weapon. Mustard gas can be absorbed through the skin, and it could take up to six weeks to die from mustard gas. The effects of mustard includes itching uncontrollably within 24 hours, developing horrendous sores and blisters. Some people began to cough up blood, and causing respiratory distress.

Don't use plagiarized sources. Get your custom essay on
“ The Birth of Chemotherapy in Yale ”
Get custom paper
NEW! smart matching with writer

During WW2, naval staff exposed to mustard gas were discovered to have toxic modifications in the cells of the bone marrow that evolve into blood cells during military action. During that same era, the U.S. Army was studying an amount of mustard gas-related chemicals to create more efficient war agents and create protective measures as well. Yale’s chemotherapy experiment came about as a consequence of chemical warfare specifically mustard gas, first used in World War 1 by the Germans on the Allies, with catastrophic outcomes.

The agent that was derived from a lethal gas used in the trenches of WW1 mustard-gas was studied by two doctors at Yale University, Louis Goodman and Alfred Gilman. They were assigned to study nitrogen mustard compounds and any newly developed relatives of mustard gas. They explored the medical records of the mustard-gas affected troops and realized that many of them had a remarkably small amount of immune cells in their blood cells that, if mutated, could evolve into leukemia and lymphoma (Leukemia and lymphoma are both forms of blood cancer.

The main difference is that leukemia affects the blood and bone marrow, while lymphomas tend to affect the lymph nodes). They exchanged a nitrogen molecule for sulfur and had a more stable compound in nitrogen mustard . Nitrogen mustard was researched and discovered to work against lymph node disease called lymphoma in the course of that job. They hypothesized that if mustard gas could destroy normal white blood cells, it could also destroy cancerous ones. So they conducted the first therapeutic experiments with the intravenous use of mustard agents by administering sulfur mustard and nitrogen mustard into the veins of cancer patients and animals.1

The project was so confidential that Gilman and Goodman referred to the nitrogen mustard compound they used as “X” in their notes. In searching for ways to counteract X’s toxicity, they discovered it killed rabbit lymph and white blood cells, suggesting it could work on malignant tumors. Then they acquired a mouse with a big tumor and treated it successfully, although the tumor came back. A second therapy resulted in less tumor reduction and none at all the third. But the therapy extended the life of the mouse considerably. They presented this information about the mouse with lymphoma to a thoracic surgeon Gustaf E. Lindskog, where he supervised them into their first chemotherapy patient in his clinic.2,3

The lymphoma patient, known only as “J.D” in the medical literature, received the first known chemotherapy .He was a 48-year-old man with a massive tumor on his jaw, meant he could not swallow or sleep. He could not even fold his arms across his chest because the tumors in the lymph nodes in his armpits were so big. For 16 successive days, he underwent external beam radiation with significant reduction in tumor size and improvement of his symptoms. His enhancement, however, was short lived, and he needed further surgery to remove cervical tumors. He underwent several more radiation cycles to decrease the tumor size, but they become unresponsive by the end of the year and spread to the armpits. He suffered from respiratory distress, dysphagia, and weight loss by August 1942, two years after the original onset of symptoms, and his prognosis seemed hopeless. 1,2

By August 31, J.D. was improving. He was able to sleep comfortably in bed. Eating was easier, and he could move his head in a wider arc and crossed his arms on his chest for the first time in weeks. By September his condition had improved markedly, but his white blood count, which indicates levels of the immune system’s disease-fighting white blood cells, was falling precipitously. A month into his treatment, his cancer was undetectable. Unfortunately, the nitrogen mustard had become resistant to whatever cells remained. The lymphosarcoma of J.D. produced an implacable return. He rapidly went downhill, suffering from depression of the bone marrow, bleeding, and breathing distress. On 1 December 1942, his hospital stay’s 96th day, he passed away. 2,3

J.D’s desire to undergo a new therapy has resulted in decades of developments in the prevention and care of cancer, when the promise of chemotherapy has often been fulfilled and sometimes crushed, but followed without ceasing. The first evidence of the effectiveness of chemotherapy and its side effects paved the way for decades of enhancement in these lifesaving agents. The case of J.D was extremely crucial because it disclosed three elements of chemotherapy: tumor regression, tumor resistance, and poisonous side effects that subsequently influenced the growth of better oncological medicines. J.D have given us hope for the future; this one patient was accountable for the birth of chemotherapy as this was a monumental moment in the history of medicine. In the 1940s, the growth of a new type of cancer control was due to the determination of doctors and researchers who intentionally attempted to obtain dividends from war guns from health care.

The Birth of Chemotherapy in Yale. (2019, Nov 21). Retrieved from https://studymoose.com/the-birth-of-chemotherapy-in-yale-essay 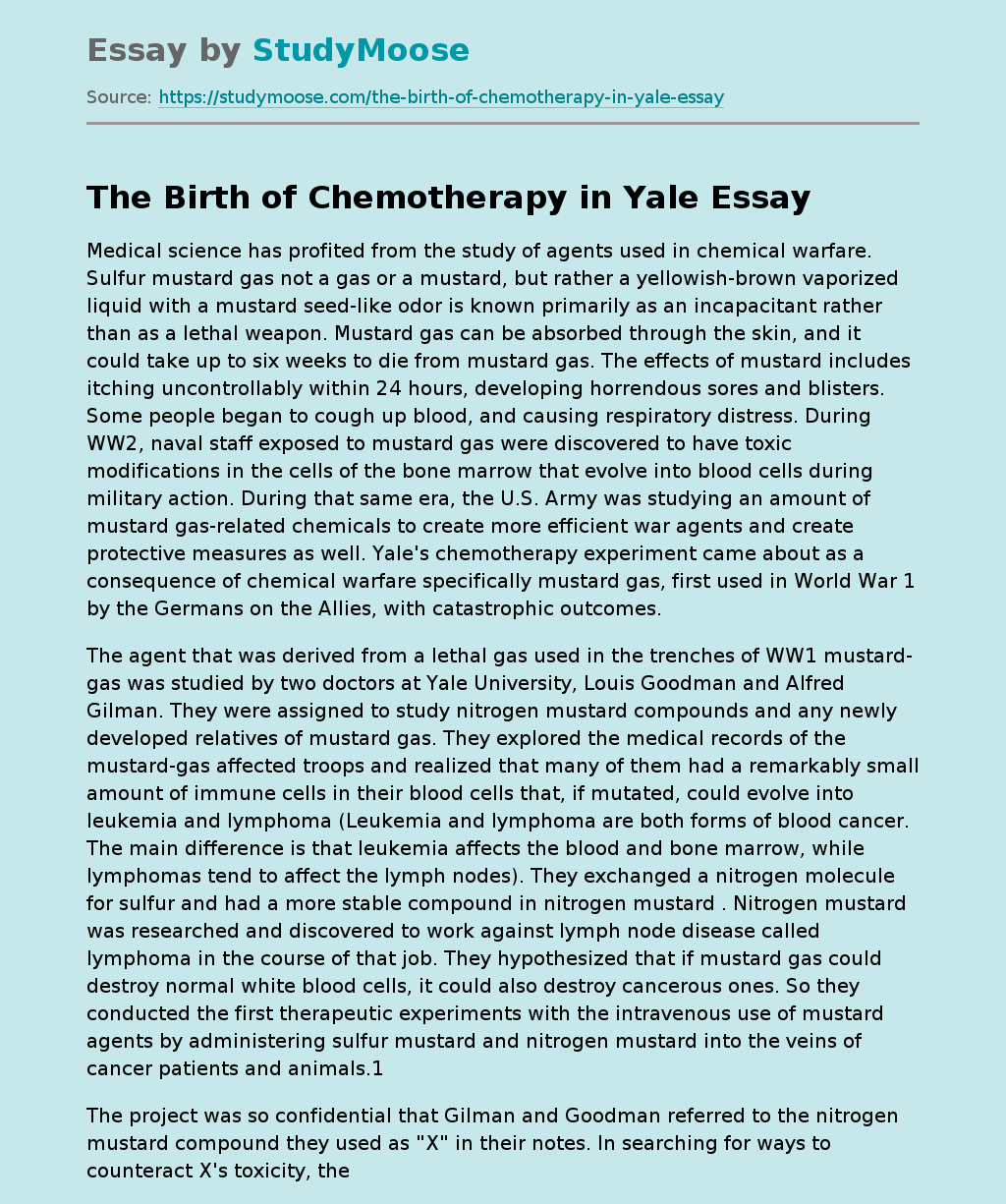