The Best Decision I Have Ever Made

We’ve all had decisions we made in life. Some decisions were good and became life changing while others were not so good and become life experiences. One decision I made in my life will always stand out as the best decision I ever made. This involved my youngest son Gannon and the decision to have a major operation that not only saved his life, but gave him a better quality of life. To understand why this changed his life for the better you need to know what he has been through.

Don't use plagiarized sources. Get your custom essay on
“ The Best Decision I Have Ever Made ”
Get custom paper
NEW! smart matching with writer

He has this knack for making people fall in love with him in an instant. For the first two years of his life he was a healthy little boy, but there was something not quite right with him. He wasn’t developing normally for his age. Then in June of 2006 it all became clear why.

This was a normal, beautiful summer day in northern California. My husband Mike and my Uncle Karl were in the backyard putting up are swimming pool and my other three children were outside riding their bikes and playing football. My mom and I were getting ready to barbecue and realized we needed to run to the grocery store.

Gannon was being perfectly fine playing with his hot wheels. When we arrived home, I came in from the garage too Mike holding Gannon in his arms and he said “Something is wrong, the ambulance is coming”.

I took one look at Gannon and my heart dropped. His body was stiff and he was shaking. He was foaming from his mouth and his eyes were rolling back in his head. All I could think at that moment was “Where the heck is the ambulance my baby is dying right here in front of my eyes”. Gannon finally stopped shaking right when the ambulance pulled up. They took one look at him and said “He had a seizure. ” “What the heck”, I thought.

That was the beginning of the next six years of hospitals; testing, medication and watching my little boy wither away right in front of my eyes. Gannon had a grand-mal seizure that day and it was just a small taste of what we were about to face. The next three years he continued to have six to eight grand-malls a week. Gannon had various tests run on him over the course of this nightmare. The problem was that all these tests, the CAT scan, MRI, PET scan, various blood work and some others, all came back normal. How was that possible? The neurologist had no clue, so they just decided to shove meds down his throat.

Gannon took six different seizure meds on a daily basis. At the same time he was also diagnosed with Autism so the doctors chalked it up to that. I was at my breaking point and then he stopped. All of a sudden Gannon, at the age of 5 ? stopped having grand-malls. Finally the entire family, Gannon’s therapist, the doctors, all of us got to breathe. Sadly, this only lasted one short year. A little after his sixth birthday Gannon began experiencing seizures again, this time they were different, he was having partial seizures. So, back to the drawing board it was for the neurologists.

These new seizures were daily and they lasted hours and hours. There were days when he would seize morning to night. Towards the end this was every day. So, here we go with more tests. This time we tried a special diet, Gannon had a surgery to implant a vagus nerve stimulator, and we even tried IVGG therapy. Like before they were all failures. Now Gannon was very ill. His weight dropped down to under 30 pounds. So, here comes another surgery to get a feeding tube. This didn’t help as he was burning more calories from seizing then he was consuming. He was dying! The doctors feared at any moment he would go into cardiac arrest.

So, that left us with one option: Brain surgery. On May fourth 2011, Gannon checked into U. C. S. F. and got ready for a long 14 hour surgery. The surgery involved removing his right temporal lobe and disconnecting the entire right side of his brain. So, my husband and I waited. That was the longest 14 hours of my life. Finally, the surgery was complete and here comes my baby. What a sight to see. Gannon had tubes everywhere, his whole head was wrapped up, there were wires sticking out of his head draining the fluid, I broke down. That was a pattern over the next few weeks as I was a roller coaster of emotions.

The worst was the fear of waiting to see the outcome. I knew there would be paralysis on his left side but would he talk, would he still be my Gannon? Time would tell. On July nineteenth, Gannon checked out of the hospital. Things were different that’s for sure. Yes, he was now wheelchair bound, yes he was still having seizures, although minimal they were still rearing there ugly head, yes he was still on meds but somehow things were better. Gannon was happy. He was putting on weight, he was talking and most importantly he was smiling his little half smile and he was laughing.

The laughing was the best as there weren’t very many moments of those before. We knew walking out of there we still had a rough road ahead; we had to get Gannon walking again. We also knew that day in May changed our lives forever. Not even a year later Gannon still has epilepsy, he is paralyzed, he still has autism but there is something he has gained. He has gained a chance at a life. My baby is not sick anymore, there is no fear of death at any moment. He has a life, a quality life. Making the decision to have my little boy lose half his brain will always remain the best decision I have ever made.

The Best Decision I Have Ever Made. (2018, May 25). Retrieved from http://studymoose.com/the-best-decision-ive-ever-made-essay 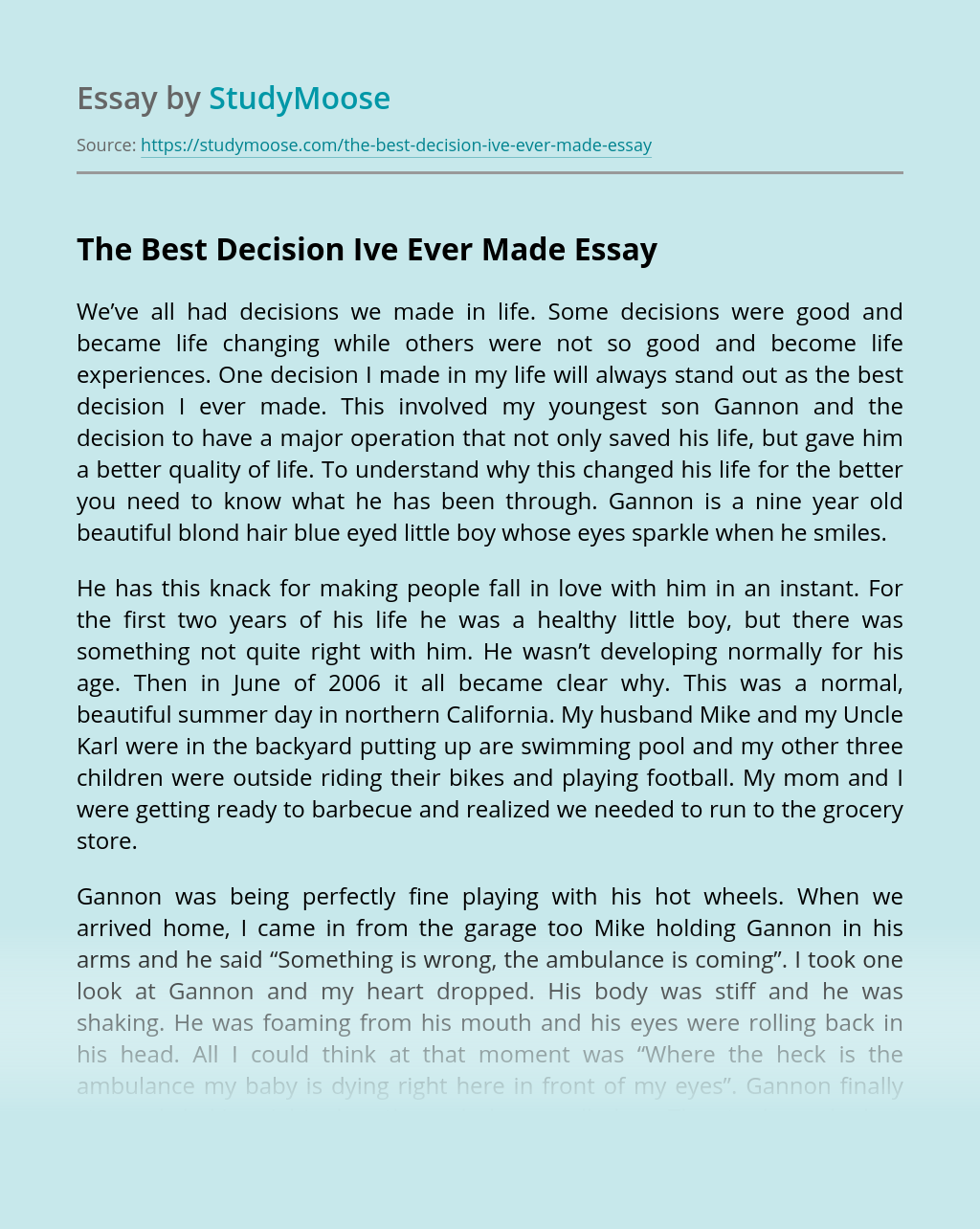