The Battle of Gettysburg

It is 1863, and the people of the United and Confederate States are wondering who will win this Great Civil War. Southern General Robert E. Lee decided to make a bold move and marched his troops to Pennsylvania to achieve a victory on Union soil. As the news of Lee’s army reached Northern General Meade, they followed in immediate pursuit. The Battle of Gettysburg is a crucial turning point in Civil War due to the termination of the Southern advance into Northern States and it resulted in a damaging impact in the Confederate Army’s supply of soldiers.

Don't use plagiarized sources. Get your custom essay on
“ The Battle of Gettysburg ”
Get custom paper
NEW! smart matching with writer

Since the Battle of Gettysburg ceased the Southern progression into the North, it became a critical moment in the Civil War. Document A has shown that battles continued in Southern Territories, such as Georgia, Tennessee, and Missouri after Gettysburg. Without Gettysburg’s powerful effect, the Southern Army would have continued to have advanced into Northern Territories. The battle proved to be a dramatic change in the Northern Army, since it allowed more battles to form in the South, but never again in the North.

Due to the Battle of Gettysburg, the Union army stomped on Southern efforts to create a win on Union soil and lead to destructive battles in the South.

Therefore, Gettysburg proved to be a major impact on the Southern Army’s power to fight the North and diminished the chances of a Rebel victory. These casualties reflected in the Confederate Army’s commanding generals, which lead to the substandard training and execution of the Southern soldiers in later battles. Without a doubt, Gettysburg demonstrated the power of the Union and shattered the Confederate Army in countless casualties.

Through ceasing Southern advances and extinguishing their army, the Battle of Gettysburg proved to be a tremendously significant turning point in the Great Civil War for the North. Although other major Battles, such as Vicksburg, which gave complete control of the Mississippi River to the North, Gettysburg resulted in more substantial effect in the War. The significance of Gettysburg is shown by the impacts in the Civil War, mainly negatively to the South. The Battle of Gettysburg can be related today because it shows that through perseverance the odds will come in your favor.

The Battle of Gettysburg. (2016, Sep 02). Retrieved from http://studymoose.com/the-battle-of-gettysburg-essay 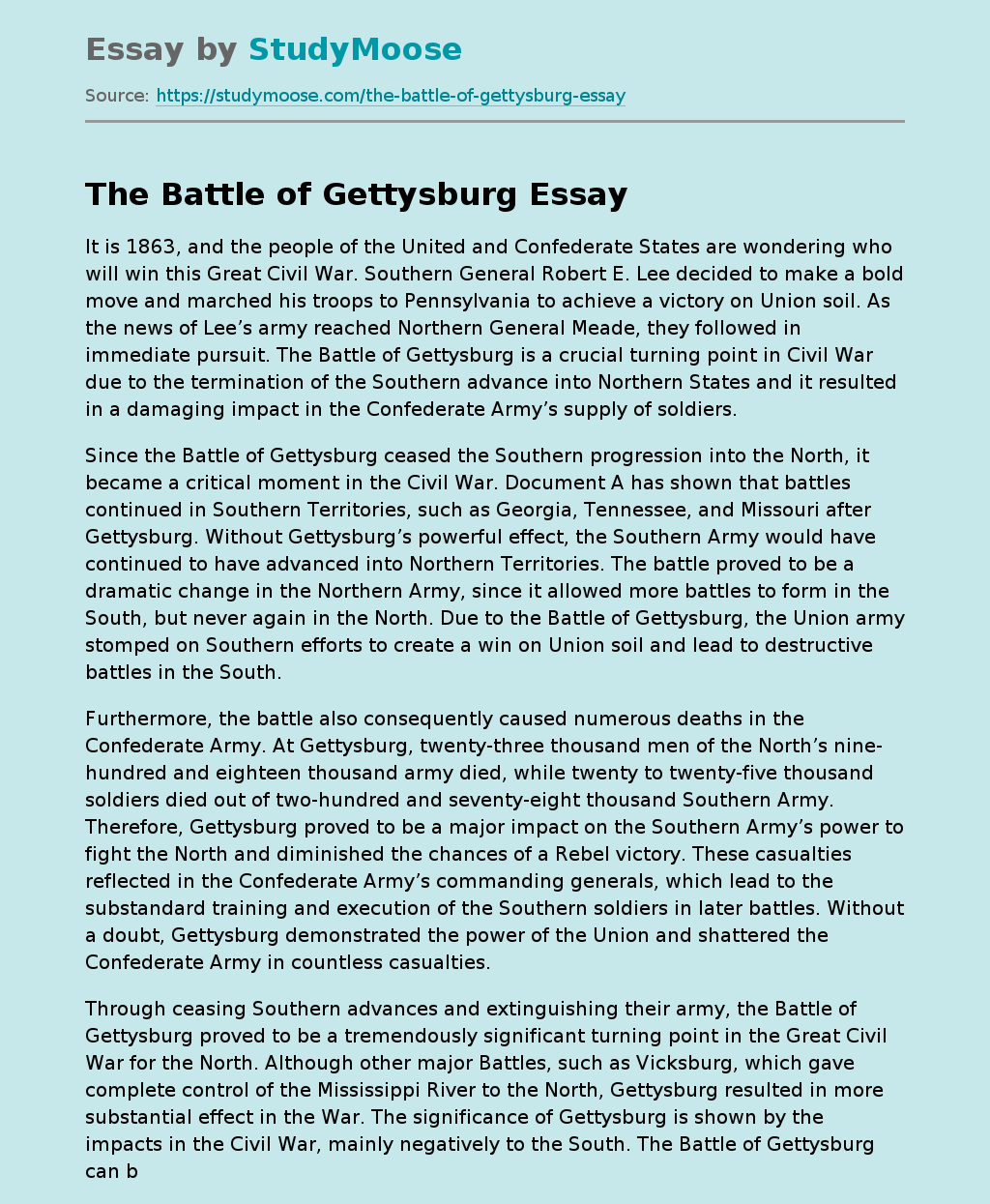