The Ban on Abortion is Not Right

I am writing this letter due to my concern about the law banning abortion in the United State of America.

This law will impact on many situations that women can experience through their lifetime, for example in the case of incest, rape and physical health.

Abortion has been a controversial topic around the world because of its invocation of ethical and religious issues of the sanctity of life. There’s a strong debate between people that are pro-life and believe that abortion is always wrong and those that are pro-choice and support abortion rights.

Don't use plagiarized sources. Get your custom essay on
“ The Ban on Abortion is Not Right ”
Get custom paper
NEW! smart matching with writer

This letter discusses views with pro-choice in all cases.

On May 14th, 2019 an eleven- year- old female got raped by a twenty-six-year-old male. Now she is unable to get an abortion because of the new abortion law that is being proposed around the United States of America. This incident happened one week after Brian Kemp, the Georgian’s governor, signed the “Fetal Heartbeat” abortion law. This is a huge concern of mine because how will an eleven- year- old manage to raise a child.

This is indeed killing the pregnant girl before her child is born, since, there will be a huge risk on the pregnant girl’s psychical health. In addition to that, the whole experience can be traumatic to the eleven-year-old child. There is no right that the victim should be punished because of the wrongdoing of a rapist.

This situation will emerge from time to time, banning abortion will leave many young women and women in general to raise an unwanted child.

I do agree killing is a sin but at least in case of the incident like the eleven-year-old child, at least they should have the right to choose. It is a huge issue that should be discussed between everyone particularly women because women are entitled to their bodies. Many governors, like Kemp, do not have the right to choose what a woman should do. There are many male politicians were with the banning the abortion law such as Todd Akin who claims, “If it’s a legitimate rape, the female body has ways to shut that thing down.” This is just heartbreaking because clearly, Akin does not know anything about the human body. I am indeed amazed because people with authority tend to think that they can say whatever they want and do whatever they want.

The illegalization of abortion is bringing many issues to the community as a whole. I indeed think abortion should be legal for certain situations such as, in case of rape and health issues.

The Ban on Abortion is Not Right. (2021, Feb 05). Retrieved from https://studymoose.com/the-ban-on-abortion-is-not-right-essay 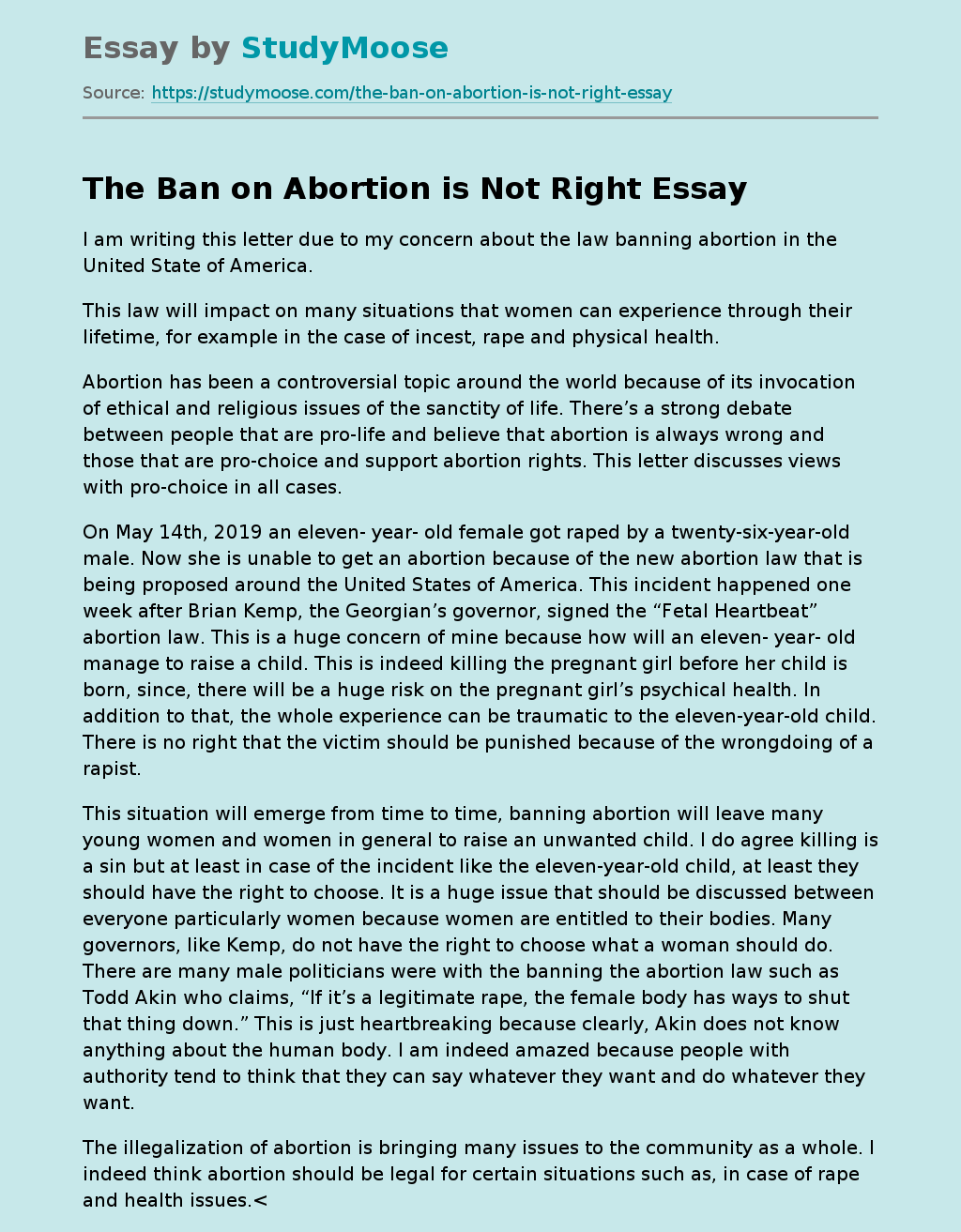