Kate Chopin’s “The Awakening”, her most famous novella, was written in 1899 and is widely regarded as one of the earliest American works that earnestly focuses on women’s issues and ideals. Chopin’s novel captures the essence of the struggle for freedom, equality, and independence in which women have been formally engaged for almost 150 years. In Edna Pontellier we find a woman that goes beyond being a symbol for freedom and the pursuit of female independence, but a complex individual coming to terms with very human cognitions and emotions.

Don't use plagiarized sources. Get your custom essay on
“ The Awakening: Edna Pontellier Character ”
Get custom paper
NEW! smart matching with writer

As the novel begins, we are introduced to a “Mrs. Pontellier”, a woman seen through her husband’s eyes, one whose identity was clearly bound to her spouse, his surname, and perhaps most importantly – his society. As the novel progresses we get to know her as “Edna Pontellier”, a woman attached to her familial and societal duties, albeit feeling like a perpetual outsider in a Creole society.

During their stay in Grand Isle, she peels away the restrictions and chains binding her to the people around her, her own children included.

Her change is noticeable even by her husband, who states in chapter XIX: “He could see plainly that she was not herself. That is, he could not see that she was becoming herself and daily casting aside that fictitious self which we assume like a garment with which to appear before the world.”(pg.108) By the end of the novel, we meet a new woman to take the place of the restrained shell; we meet “Edna”.

Edna is, finally, an individual. She is not a mother-woman, or a housewife; she is nothing more than Edna, but in being so she becomes a symbol of freedom for the women of her time. The matter of Edna’s awakening is clearly strongly connected to the woman’s increasing artistic inclinations.

Her dabbling in the arts ignites her divergent desires and initiates her straying from the norm, setting her on the road to becoming her own person; in fact, Edna’s experimentation with art directly corresponds to her lifestyle and sexual experimentation. All of the changes in the novel connect to the confusion her role as a female artist has created, including her opinions of the people around her, her ignited romantic desires, the decay of her relationships and eventually, her own death.

This is particularly obvious near the end of the novel, when she thinks of Mademoiselle Reisz, the epitome of an artistic and therefore “courageous” soul: “How Mademoiselle Reisz would have laughed, perhaps sneered, if she knew! “And you call yourself an artist! What pretensions, Madame! The artist must possess the courageous soul that dares and defies.”” (pg. 176) In quoting M. Reisz, Edna seems to feel that by going into the ocean, her soul is finally daring and defiant (as described by Mademoiselle Reisz), and she is dying a death suitable for an artist. This appeals to the yearning every woman undergoes in her formative years, a desire to be more than they are, to spread the wings society has ruthlessly clipped with its demands and expectations.

The desire for an identity separate from the family nuclei is an issue many women struggle with, especially young first-time mothers. These desires were muted if at all existent back in the time “The Awakening” was written, but instead we find Edna having very real, independent, and even selfish thoughts about what she’d be willing to sacrifice. In chapter XVI she boldly states, “I would give up the unessential; I would give my money, I would give my life for my children; but I wouldn’t give myself. I can’t make it more clear, it’s only something which I am beginning to comprehend, which is revealing itself to me.” (pg.97)

As a reader, we are presented with an Edna who understands the separation between motherhood and womanhood. She would give her life, her existence for her children, but she would not compromise her identity for them, meaning she would not lose her essence for the sake of others – not her children and certainly not her society. Breaking through the role appointed to her by society, Edna discovers her own identity independent of her husband and children, culminating in her release through death. She is throughout presented as a complex and emotionally dynamic character meant to both warn and inspire women through time. Many of Kate Chopin’s other stories feature passionate, unconventional female protagonists, but none presents a heroine as openly rebellious as Edna. In the end, Edna adhered to her philosophy of freedom, something not many women, both of her time and ours, have had the courage to pursue. 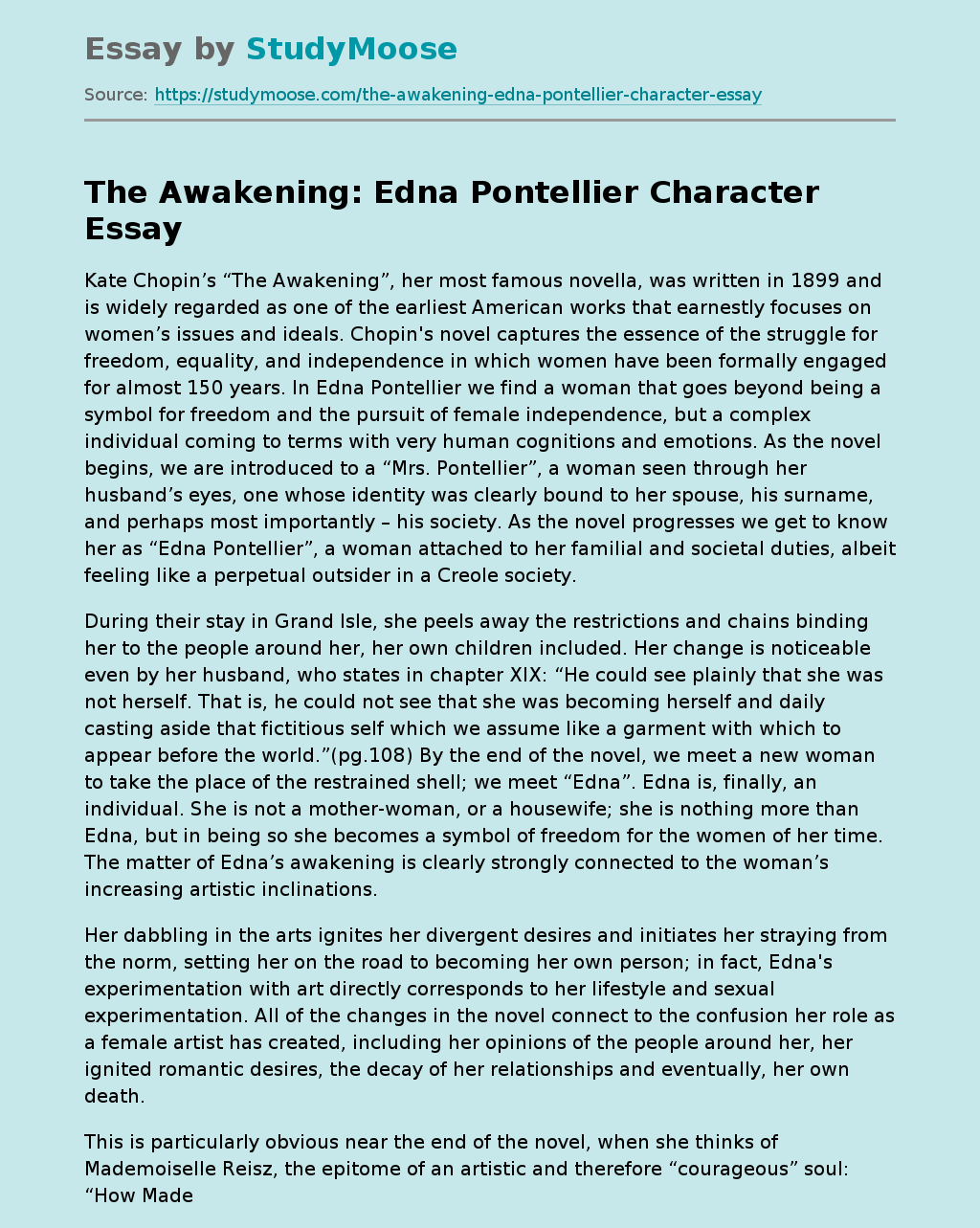