The Awakening by Kate Chopin

Illuminating Scene in The AwakeningNovelist Edith Whorton states that a novelist “must rely on what may be called the illuminating incident to reveal and emphasize the inner meaning” of the book. In the novel The Awakening by Kate Chopin, the illuminating episode is when Edna has an epiphany after swimming out into the sea. She comes to the realization that she can speak freely and share her emotions openly as she finds it liberating. This moment functions as a casement that reveals the overall meaning of the work as a whole that women should feel free to practice individuality over conformity and sexuality over repression.

Don't use plagiarized sources. Get your custom essay on
“ The Awakening by Kate Chopin ”
Get custom paper
NEW! smart matching with writer

Edna’s epiphany in the sea serves as a casement that opens the meaning of the work because this is when she first comes to the awareness that she should not conform to Victorian Society. Edna no longer feels the pressure to obey her husbands every demand as an ungovernable feeling came upon her while she was swimming.

The water symbolized her freedom and escape of societal norms. Chopin’s use of similes to describe her metamorphosis like an overconfident child who first learns to walk illuminates her newfound power and desire for sexual satisfaction and freedom. This is significant because this was not expected of women during this era who were traditionally the mother-wives that took care of their children and obeyed their husbands. The episode is necessary as it enables Chopin to later uncover that women should act upon feelings of individuality and sexuality.

Edna’s discovery of feelings of empowerment after she enters the sea allows Chopin to reveal that women should not conform to society and feel repressed. Her new sense of power can be seen in the scene as she becomes reckless and swims out father than any women had swum before.

After the swim, Edna had gained confidence in her solitude that translated into her life immediately when she refuses to get into the marriage bed even after Leonces demands. She even talks back to him, telling Leonce to never speak to her like that again. This illustrates Edna’s newfound sense of individuality. She no longer feels owned by her husband and is free to do as she pleases. The moment also foreshadows the ending of the book where Edna dies physically but is also rebirthed. Edna’s growth in freedom of expression enables Chopin to illustrate that women should not feel pressured to conform to society.

This incident furthermore allowed Chopin to reveal that women have the power to resist repression and should not be forced to hold back sexual feelings towards other men. Edna’s illuminating moment in the sea functioned as a casement which enabled Chopin to reveal that women should act upon feelings of individuality and sexuality and should not let society govern their lives. If this moment did not occur, Chopin would not have been able to reveal her purpose as Edna would never have discovered her repressed feelings.

The Awakening by Kate Chopin. (2016, Aug 17). Retrieved from https://studymoose.com/the-awakening-by-kate-chopin-essay 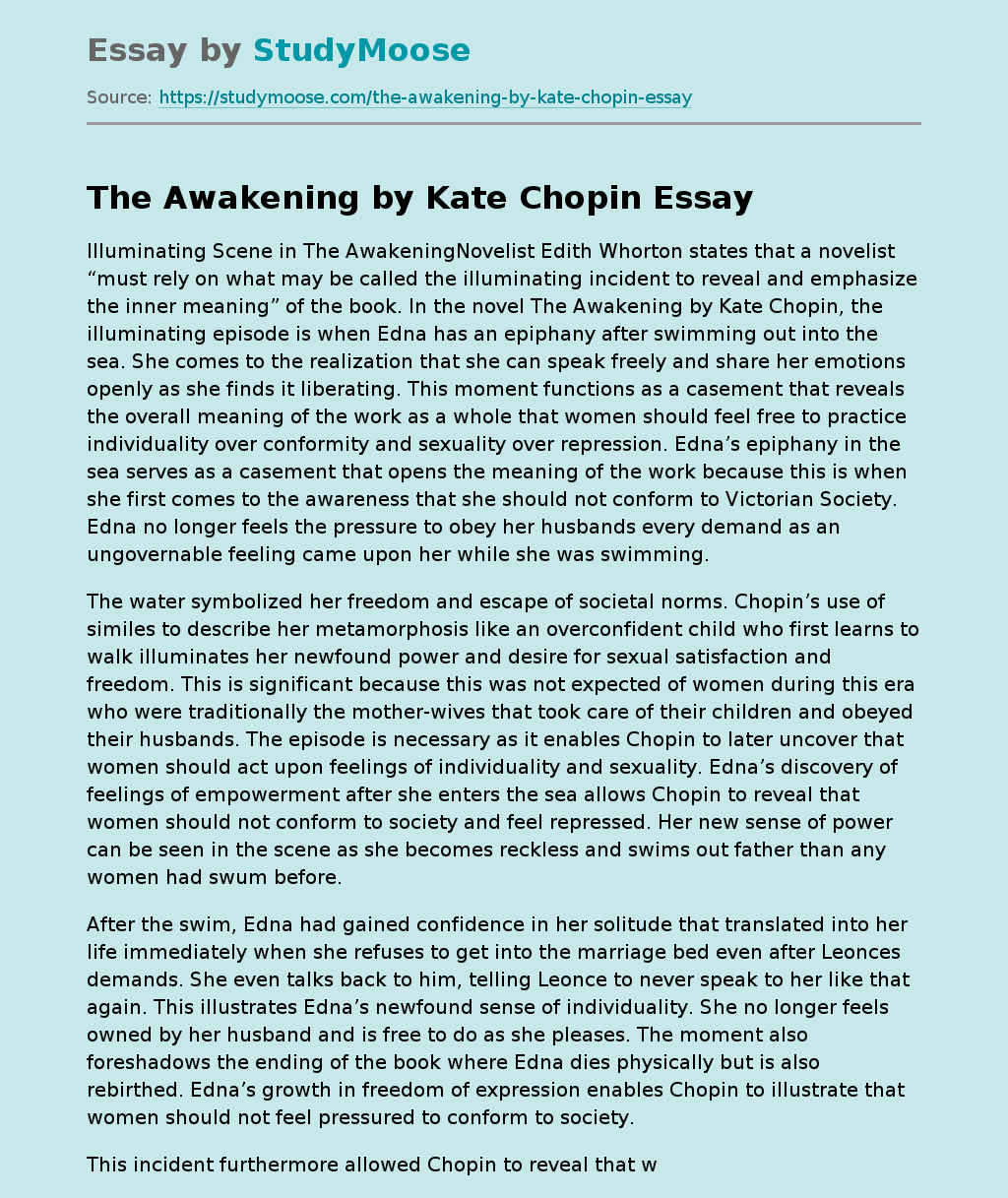